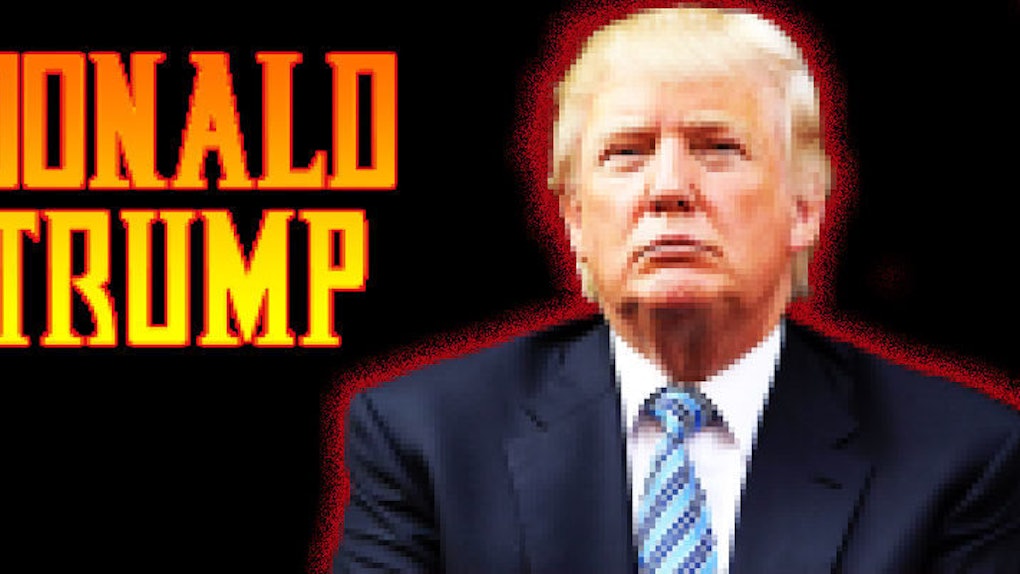 Tonight, 10 men naive enough to want to represent the Republican Party in the 2016 election will get up on stage and try to avoid saying whatever statement we dub The Dumbest of the Debate and ruin their run for president before it even starts.

It's currently close to impossible to confidently predict who will eventually become the nominee, but there is one thing we know for certain: It's going to be a hard-fought battle filled with people exchanging brutal jabs while reciting stupid catchphrases.

It's basically a real-life version of Mortal Kombat, which is exactly why we were inspired to turn the presidential hopefuls into characters from the classic video game.

Also, while John Kasich might be appearing at the debate instead of Rick Perry, we decided to go with the latter because it's easier to make fun of people others have actually heard of (and Rick Perry has given us so much to make fun of).

Strengths: His unnatural hair serves as a protective helmet against any attacks to the head. And he can instantly summon an army of moderately attractive cocktail waitresses wielding broken champagne bottles.

Weaknesses: He is terrified of Mexicans, he has a tendency  to say things he'll immediately regret, he steals campaign slogans from Reagan and there's a chance he might not actually know how money works.

FATALITY: Uttering "You're fired" while staring directly into his opponent's eyes, causing the person to literally light on fire.

Strengths: Has a deafening yell capable of instantly silencing anyone who dares to challenge him. And he has the ability to close off major arteries when he deems it necessary.

Weaknesses: Favors punching his opponents (especially teachers unions) in the face, which often leaves his body vulnerable. Knows less about marijuana than your aunt who's never tried it but left a party after smelling it back in college. Also, he's in sh*tty shape.

FATALITY: Sitting on his opponents until crushing them like the end of "The Crucible."

Strengths: Understands the Internet better than his fellow candidates (which essentially says nothing). And he knows how to shoot a gun.

Weaknesses: Might be Canadian. Believes the existence of snow anywhere on the planet means global warming is a myth. Has the kind of face that makes you think he pees a little when frightened. Coincidentally, he is frightened by the word "vagina."

FATALITY: He builds a wall around his opponent until the person starves to death.

Strengths: A dedicated student of Fox Style, a form of kung fu developed over the past few decades to fight liberals intent on destroying Christmas and the institution of marriage. He has the ability to summon his sons for additional support. He also has the power of Jesus on his side.

Strengths: All of the Koch brothers' money. Last name makes him an obvious favorite for the highly sought-after Chuck Norris endorsement.

Weaknesses: Large gatherings of workers with a collective interest.

FATALITY: Shoots a spear out of his groin and impales his opponent with it while shouting the names of corporations that have contributed to his campaign.

FATALITY: Repeating his last name until Dick Cheney appears and dispatches his opponent with a birdshot.

Strengths: Uses his background as a famous neuroscientist to convince people the wildly moronic and offensive things he says about homosexuals are somehow rooted in science.

FATALITY: Reaching his hand into his opponent's torso and removing the person's spine from his or her body.

Strengths: Accepts bitcoins. Has mastered the art of avoiding conflict in the first place. Filibustering has allowed him to strengthen his bladder, so he can hold his pee for an inordinate amount of time.

FATALITY: Bludgeons his opponents by furiously throwing copies of "Atlas Shrugged" at them until they either accept capitalism as their one true savior or die.

Weaknesses: Forgetting major aspects of his policy in the middle of debates.

FATALITY: Yells "Everything's bigger is Texas" before growing to four times his normal size and washing his opponent down with an entire keg of Shiner Bock.