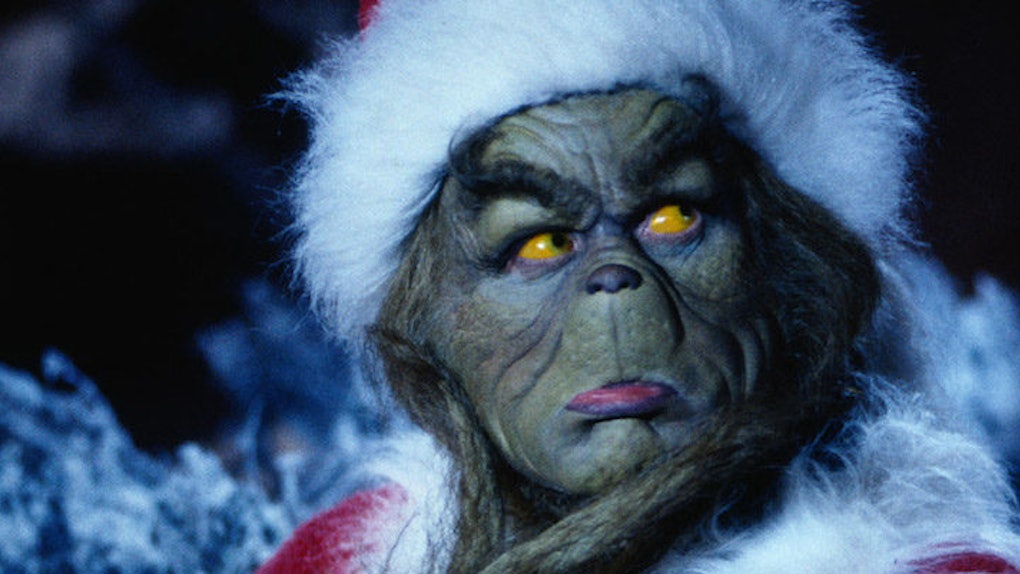 8 Ways The Holidays Will Make You Hate Everyone

The holidays are that special time of year when everyone is supposed to be SO HAPPY. And many articles on this site will list all the reasons the holidays ARE THE BEST and FULL OF LOVE and THE ONLY TIME WORTH BEING ALIVE.

Yeah, this article is going to be the opposite of all that.

Because the reality is the holidays are just like all the rest of the days of the year, except with a lot more money spending, a lot more disappointed, sad moms and a lot more having to do things you don't like.

I mean, it's not surprising people get tense during the holidays. The holidays are like a month full of New Years Eves -- they're supposed to be the best sh*t ever and when they invariably fail to live up to that, you get SUPER DEPRESSED.

But it's not your fault, people. The cards are stacked against us. Here are eight ways the holidays are designed to make you hate everything.

The instant all our Thanksgiving dinners find themselves floating, devoid of nutrients, in toilets across this great country, every store and restaurant and elevator and hotel lobby begins playing holiday jingles.

You know, those songs that are so terrible we never, ever listen to them any other time of the year? Yes, everywhere you find yourself will suddenly and incessantly be conducting psychological warfare on your patience with these ear-poisons.

2. Opening presents in front of people

I think the closest I've ever come to being able to understand what it's like for a girl to fake an orgasm is when I pretend to be excited while unwrapping a terrible present in front of my aunt.

Pretending to be thrilled about a pair of yellow corduroys requires about the same amount of psychological willpower as lifting a car and throwing it across the Hudson River.

3. The War on Christmas

Being forced to listen to the entire population of this country discuss whether or not a paper coffee cup hates Jesus really makes you question whether or not humans should give some other creature -- say, the platypus -- a chance at running the world.

4. If you're Christian, having to actually go to church and stare at a guy who has never had sex tell you how bad sex is

I go to Church twice a year. Once on Christmas, when my mom insists, and once when I don't have an umbrella and it's raining outside.

To be honest, I'm proud of being Catholic -- it's relatively cool I'm part of a really old cult that (sometimes) preaches kindness and charity and also actively worships a zombie -- but being in a church is like being in your grandmother's really depressing, dark basement where she keeps all her photo albums: You spend all your time there being bored, talking about the past and trying not to fall asleep.

5. Buying people presents even though you have no money

The holidays are an infuriating time because you get a bunch of presents for free, but you also have to spend all your money on buying stuff for the "people you love." Yeah, I know, it's a nightmare.

Solution: Everyone should just give themselves presents instead. Sure, we'll all still be penniless, but at least we'll have PS4s.

What I'm saying is, someone please buy me a PS4.

6. All holiday movies that aren't "Home Alone" and "Elf"

Holiday movies are either the best things ever made by human hands or they are the closest we'll get to viewing the fever dreams of the devil. There is no middle ground.

And yet, in the weeks between Thanksgiving and Christmas, your televisions will be plastered with these travesties.

They're movies where everyone learns to love their family better and people take gift-giving more seriously than nerds take people confusing Dumbledore and Gandalf -- and they look nothing like your actual life, where family dinners all end in someone getting drunk and shouting about the war in Iraq.

Please stop staring at me, superbaby.

8. Santa Claus still not being real

Maybe it's just me, but I don't think I'll ever get over Santa Claus being fake.

You raise your children to believe there is a guy who gives all the kids in the world presents and rides a sleigh pulled by magical reindeer and lives in the North Pole with a bunch of chill elves and a hot wife (I dunno, I always imagined her being hot).

And then one day you just tell them, "Oh, yeah, sorry we just made all that sh*t up. Actually there is nothing magical and wonderful in the world, but one day you'll be old enough to lie to your kids, too."

Why wouldn't I be pissed off and bitter and drenched in eggnog during the time in which the best, most wonderful sh*t was snatched away from me.

It's like if you fell in love with a pen pal and you thought maybe you'd finally found the one and wouldn't be alone anymore, but then you discovered it was actually just your dad on the computer in the other room -- and THEN your whole family insisted, each year, everyone had to get together to celebrate the time of year you found that out.