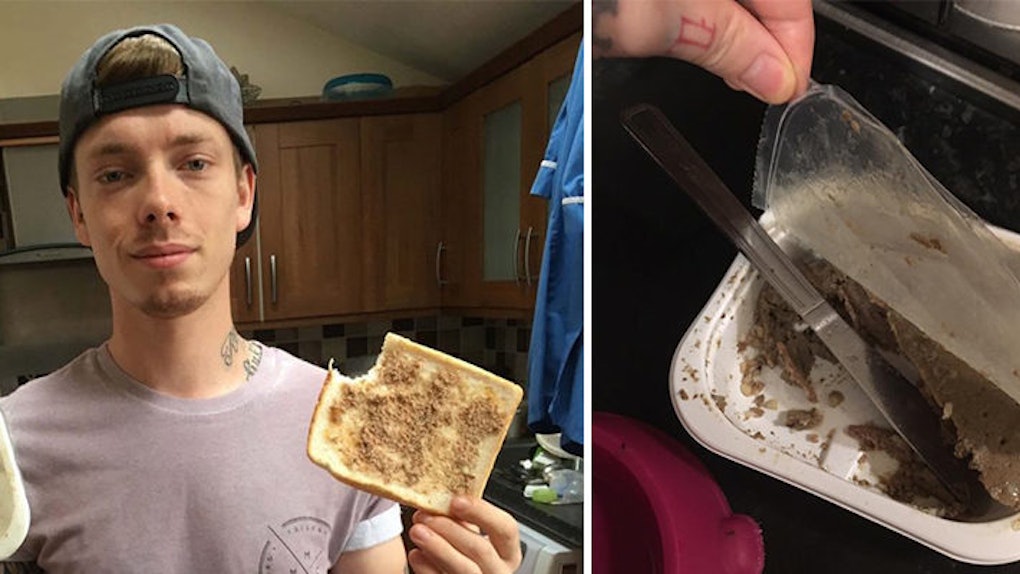 Josh Barraclough, 23, is a chef. That is his profession. He knows enough things about food that people pay him money.

And yet, Josh Barraclough didn't know quite enough to be able to tell that a sandwich he made for himself was comprised entirely of dog food.

His girlfriend Abigail Tina Elliott posted this photograph to Facebook of her dog's food, which she'd put in the fridge after opening it.

She included this caption, explaining what happened:

Just asked josh to feed the dog he came in 3 times asking where his meat was! Told him it was in the tray in the fridge he came back in and was like what the white tray? I was like yeah then he was like are you fucking kidding me I had it in a sandwich yesterday because I thought it was beef spread.

When questioned about the fact that the sandwich he'd made for himself didn't taste like human food, Josh explained, simply, “I thought it tasted a bit onion to be honest.”

In fact, he had been planning to make himself another of the sandwiches for lunch the next day, before finding out about the origin of its ingredients. Apparently, dog food must taste sort of OK.

"The fact he's a chef makes it even more funny," Abigail explained. "He's had the mickey taken out of him quite a lot but he's been able to laugh at himself as well."

By the way, “taking mickey” is a British expression that means “make fun of” and originates from the fact that British people thought it was nerdy that Americans loved Mickey Mouse so much (I'm kidding, please no comments).