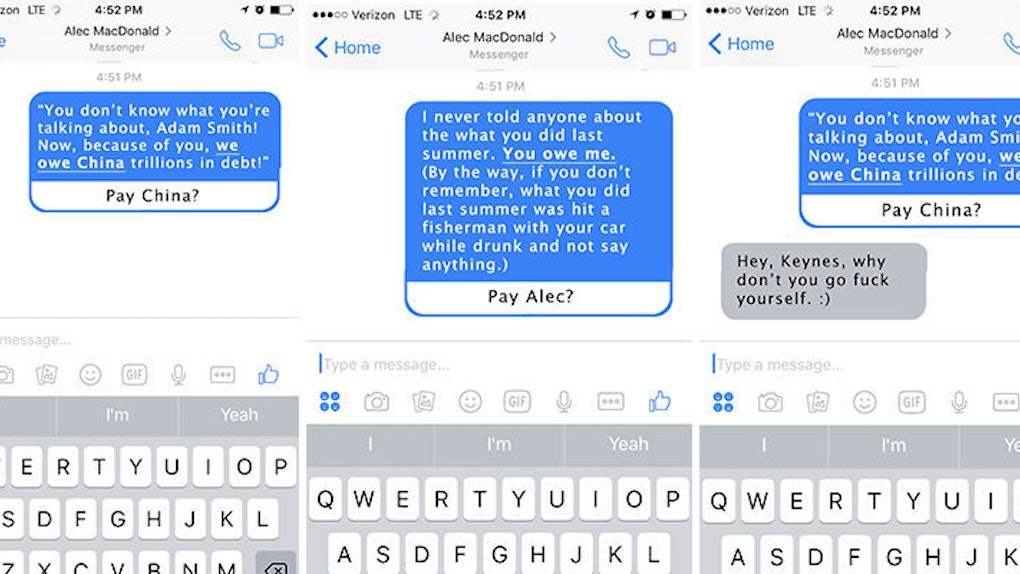 Facebook's business model now seems to be “just do what everyone else is doing.”

The thing is, this strategy works.

Because now I use that feature constantly and have forgotten about Snapchat. Facebook is consolidating the features provided by other companies so as to make its competitors less relevant.

Now they're trying to kill Venmo (by the way, my computer keeps suggesting that “Venmo” should actually be spelt “venom” as I type this — which seems appropriate, considering my friends use it to poison me and my finances).

Yes, Facebook is introducing an IOU feature, which means people can request money from you, rather than just get drunk and forget about buying you dumplings like they used to.

Here is an example, as provided by Facebook when they started rolling out the feature:

I feel like I'm watching two drug dealers speaking in code by pretending to be the most boring friends on the planet.

“Cool, I agree!” -- That comma was either written by a robot or it means “Meet me at the pier with a kilo of heroin."

Even in this example of how cool and convenient this service is supposed to be, it seems awkward. Jeremy here seems like kind of a dick.

There's just something about requesting money in conversation that is inherently weird and passive-aggressive, even if it's not meant to be.

That's why Venmo (venom) works. You don't say anything. You just make your request and give the reason for it as some weird joke (e.g. “bakakke lessons”) and that's it.

The person pays and it's not weird.

Also, if the person doesn't pay right then, it's awkward and a complete conversation-ender.

The EVEN weirder thing here is that Facebook ITSELF suggests the payment whenever you use the phrase you owe me, or I owe you or IOU.

If you use the phrase 'IOU' when communicating with someone, chat assist may helpfully offer an optional link below your message that allows you to easily pay your friend back.

Meaning that you'll be saying something and then suddenly, without you asking it to, it will ask your friend to pay you for something.

There are so many ways this can go wrong that I don't know where to begin.

Here are just some examples of how Facebook suddenly deciding to show a payment pop up without you asking it to can go wrong:

And here's another important example:

Sorry, both my parents are economists. I, on the other hand, studied make believe. So the one above probably makes no sense.

Next, Facebook messenger now allows you to start a poll.

Again they offer us a preview of how “convenient” and “chill” this will be, and again, the lives of the people they make up here have set up camp right at the bottom of the uncanny valley.

Four people holding a poll for where to go to eat? Just, like, ask. Counting to four is not a difficult thing.

Sure, this will work if you are in a Facebook chat with 38 people in it. In all other circumstances it is, at best, useless, and, at worst, the perfect tool for passive-aggressiveness.

Oh, you don't believe me? Here's an example:

Facebook is just doing its very best to give us more ways to ostracize each other and make each other even more insecure.

RIP, Myspace. When things were simpler.