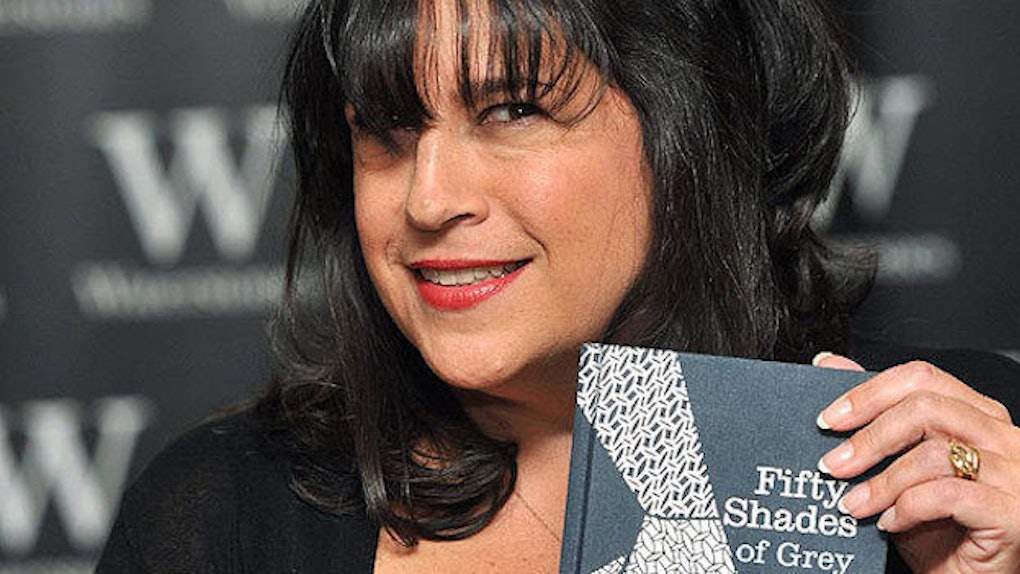 I will be straight with you, People Of The Internet: Everything I know about "Fifty Shades of Grey" came from watching the movie on a plane, on someone else’s screen, with no sound.

Apparently, it is about a man who hates girls but loves legal documents.

Yesterday E.L. James, the writer of the impressive book (which sports magnificently lyrical lines like, “Suck me, baby.”), decided to do a Q&A on Twitter.

More accurately, E.L. James’ publicists decided they should squeeze one last bit of press from her nipple-hardening books by optimistically tossing her into a pit of Internet piranhas.

#AskELJames Is there a safe word which will stop you from writing anymore of this bollocks? — TittyBiscuits. (@dawneywawney) June 29, 2015

#AskELJames I need advice on making a BIG romantic gesture. Should I put a GPS tracker in her phone and make threats if she tries to leave? — Liam Dryden (@LiamDrydenEtc) June 29, 2015

#AskELJames Can you confirm that you will be writing the story of Ramsay Bolton from his perspective, showing he is just misunderstood? — Ros (@GameOverRos) June 29, 2015

People swarmed on her like a pack of killer bees.

#AskELJames if E.L.James asks for these tweets to stop, does that mean she really wants them to continue? — Johnny Quid. (@Steelnicks) June 30, 2015

#AskELJames Do all these negative tweets sent to you seem abusive to you? I think it's romantic enough to be turned into a novel! — Stephan Krosecz (@Krosecz) June 29, 2015

Did you see the abusive relationship of Bella and Edward and think "hmm needs more abuse" #AskELJames — R_chelCh_rlt_nD_iley (@RachelCDailey) June 29, 2015

The Q&A had more burns than Pompeii.

Which do you hate more, women or the English language? #AskELJames — Ian Robinson (@eyeswideshut75) June 29, 2015

Are you going to answer any of these questions, or do you need Stephenie Meyer to do a Twitter chat first? #AskELJames — Beth Thorne (@bethorne) June 29, 2015

#AskELJames Were you watching Dexter when you wrote the scene where Christian buys stuff at the hardware store Ana works at? — Vanessa C. (@nessaskybooks) June 29, 2015

#AskELJames How many times a day do you think Charlie Hunnam just laughs with sheer relief? — Kayleigh Anne (@Ceilidhann) June 29, 2015

My personal favorite involved the phrase, "truth bombs and a sea of truth pudding."

i see people complaining about the #AskELJames tweets being "rude" or "hating", but all i see are truth bombs and a sea of truth pudding. — Rebekah Weatherspoon (@rebekahwsm) June 29, 2015

#AskELJames : how much can Christian grey lift? Can he do sick skateboard moves? When is he going to prison — The Frenemy Online (@The_Frenemy) June 29, 2015

When are people going to learn that if millions of people hate you, don't do a public Q&A on the Internet?

#AskELJames A lad once punched me on a night out. Does this mean he likes me? Should I have gotten his number? — natgovin (@notgavin) June 29, 2015