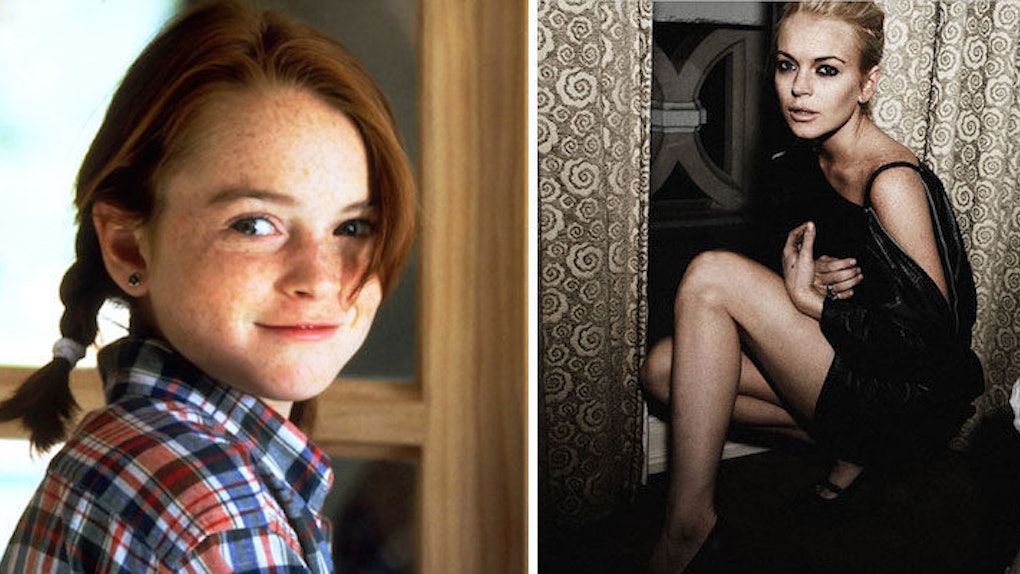 How My Celebrity Crushes Ended Up Vs. When I Fell In Love With Them

I imagine most people have some story about the time they realized they'd hit puberty, and I imagine most of those stories start with strange fluids leaving a part of their bodies they didn't entirely understand and end with an awkward conversation with their parents.

I was lucky enough to avoid this fate. I don't have an exact moment to mark my maturity, but I do know it came somewhere around the time the video for "Toxic" was unleashed upon an unsuspecting world.

I had previously liked Britney Spears for her poppy tunes and spunky attitude and while she might have still had those, she also had a bedazzled, skin-colored bodysuit that made me forget about the music entirely. Things had changed.

Over the next few years, I fell in and out of unrequited love with a steady stream of female celebrities. Thankfully, I realized how ridiculous I was acting and started obsessing over various girls at school instead.

I was recently reminded Paris Hilton is a person who still exists, so I decided to see what she was up to these days by typing her name into Google for the first time in 10 years. (I'm pretty sure this is the first time the search didn't also include the word "boobies.")

This led to me looking up some of my other past crushes to see how much their lives have changed since 2004 or so. I figured I might as well try to justify it by sharing my observations with the world.

Best Known For: Becoming one of the first people to be famous for doing nothing.

Best Known For: Not being self-destructive enough to be in the spotlight anymore.

Most Notable Film Role: The hottie in the timeless romantic comedy, "The Hottie And The Nottie."

Reviled By: Teenage girls who wanted Nick Lachey for themselves.

Best Known For: Being a mom.

Reviled By: Dallas Cowboy fans who still haven't forgiven her for what she did to Tony Romo.

Best Known For: The outfits she wore in her music videos.

Most Interesting Career Choice: Starring in the movie "Crossroads." Also: everything about Kevin Federline.

Went To Vegas To: Have a shotgun wedding with a childhood friend named Jason Alexander (not the one from "Seinfeld").

Best Known For: The outfits she wore in her music videos.

Most Interesting Career Choice: Doing a song with Iggy Azalea.

Went To Vegas To: Get paid millions of dollars to star in her own show at Planet Hollywood.

Best Known For: Doing all of that cocaine.

Public Meltdowns: Too many to count.

After looking back, I've learned a couple of things. The first is that middle-school me appeared to have a bit of a type. Based on the person I'm currently dating, it would appear this type hasn't changed much over the past decade.

However, the same can't be said for the former objects of my misplaced desire.

I'm fairly sure Lindsay Lohan would be arrested for trying to drive a Volkswagen Bug (even if it is magical), and I'm genuinely impressed Paris Hilton managed to emerge from the 2000s doing better than almost everyone else.

If you were expecting me to talk about some profound lesson I learned as a result of this exercise, I'm sorry to disappoint you. However, I hope you enjoyed this trip down memory lane as much as I did.