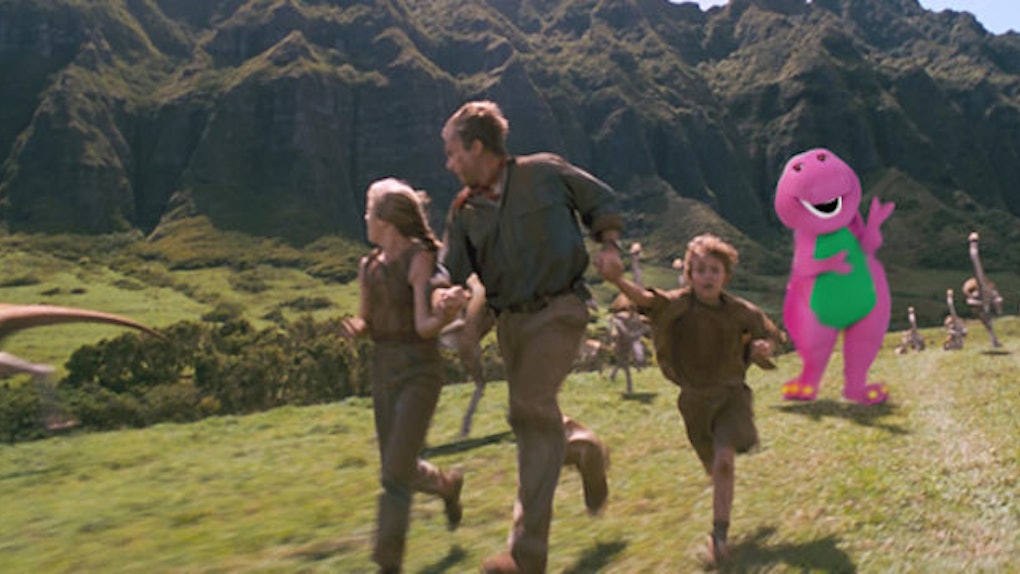 Barney Is Actually Scarier Than All The Dinosaurs In 'Jurassic Park'

Listen guys, "Jurassic Park" has nothing on "Barney."

First of all, whoever invented "Barney" (“conjured” or “summoned” are probably more appropriate words for that petrifying spawn of Hades) is clearly a big weirdo.

I mean, imagine the pitch meeting where they decided on the premise of the show. In fact, I've actually found a transcript of that meeting:

BOSS: So guys, what kind of animal should it be? WRITER #1: A dog? BOSS: No, dogs are played out. WRITER #2: A rabbit? BOSS: They like sex too much. WRITER #3:How about… [takes his sunglass glasses off slowly]... the ultimate predator. BOSS: Hm? WRITER #3: [whispers]... The Tyrannosaurus Rex. BOSS: Yeah! Yeah, the number one most terrifying and ruthless leviathan that has ever stalked the earth is a great idea! Get to it, gang!

I'm not an expert, but a giant, man-eating SUPER MONSTER wouldn't be my go-to for a children's show.

Yes, there is such a thing as thinking "too far outside the box."

The only thing that could make Barney more dangerous for kids to be around would be if he had an addiction to snorting Anthrax...

Well, except I actually put tooth picks in all my sandwiches to keep them from falling apart. So my sandwiches are LESS defenseless and vulnerable than the brainless, human toddler-nuggets Barney surrounds himself with at all times.

At least in "Jurassic Park" everyone knows the dinosaurs are the enemy.

Like when they see a velociraptor, they're like: “Hey, that thing wants to feast on our mutilated corpses. Let's leave."

But with Barney, he's just standing there, quietly plotting all the ways he will cook these toddlers.

Really, compared to Barney, "Jurassic Park" is about as frightening as watching Haley Joel Osment play the flute.

Yes, Haley Joel Osment is still around, you guys. Look him up. He looks a little weird, but he can still see dead people (because he works in a morgue).

He's around every corner, beneath every bed, crouched in every closed closet, waiting.

Barney is the king of destruction, a demon perpetually lurking in the shadows of our hearts.

And don't even get me STARTED on this song, which I sang all the time as a kid.

For those of you who don't remember, this is Barney's famous "I Love You" song (or as Satan likes to refer to it, “my finest work”).

Barney and Satan have actually written a lot of songs together. Some notable examples are “Blurred Lines” and every Maroon 5 song.

They're sort of like John Lennon and Paul McCartney — you know, they write some songs together and some alone, but really they're always influencing each other's work in a major way.

Now, if you didn't catch those lyrics, here they are:

I love you, you love me. We're a happy family. With a great big hug, and a kiss from me to you, Won't you say you love me too?

Yeah, you're right it does sound like the indoctrination ceremony of a cult. He's not asking if the kids love him, he's telling them they love him.

Listen, if you take anything from this post, it should be: If you are ever in a room alone with Barney, do the right thing and stab him through the heart.

Do it and for God's sake, don't hesitate... before he devours us all.