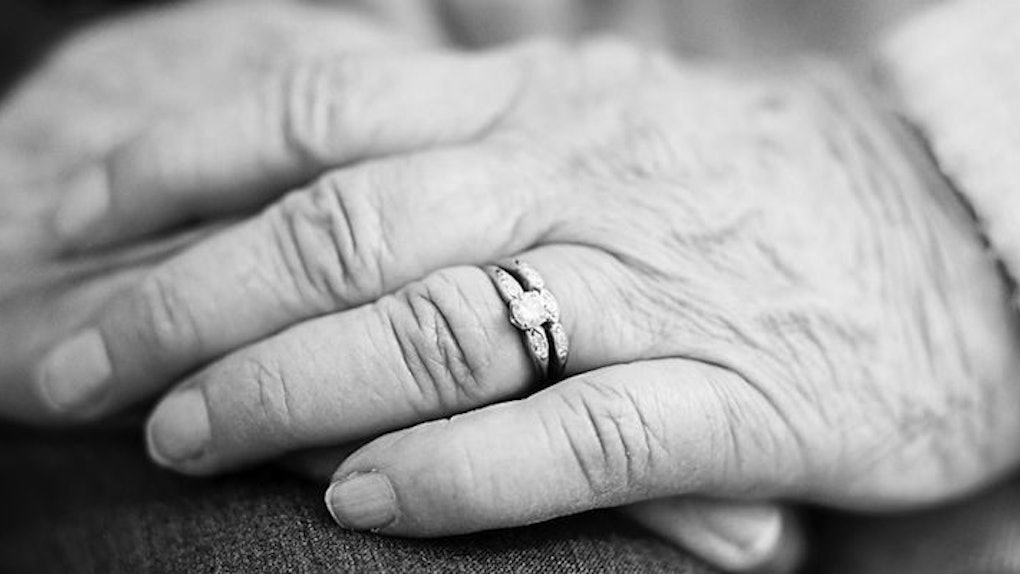 Sure, we've all seen Instagram photos of young couples with #RelationshipGoals.

But if you ask me, the ones we should really look to for #CoupleGoal aspirations are the lovers who stood the test of time and stayed together through thick and thin.

Apparently, I'm not the only one who thinks this, either.

For her latest project, titled "To Grow Old With You," wedding photographer Stephanie Jarstad set out to show the world what true love really looks like by capturing 609 years worth of love stories.

For this heartfelt visual series, Jarstad photographed couples who grew old together, and each snapshot reveals time only made these old souls fall even deeper in love.

This project led Jarstad to learn a lot about marriage. She told Elite Daily,

As a couple grows old together, love transforms from something shiny and new, to something polished and preserved.

If that's not enough to melt your heart, Jarstad also interviewed each of the couples to get the deets on how they fell in love, and you might want to grab a box of tissues because these precious stories will make you cry harder than "The Notebook."

Now, you're probably wondering the most important question: What's the secret to making your love last?

Lasting love requires a daily commitment. There is no secret recipe, but consistency comes pretty close.

Take a look at the pictures below to see these charming couples.

Doug and Fran: 55 years of marriage

We dated eight years. We broke up and got back together six times. We just couldn't communicate. But the stars kept bringing us back together. We are still working on that communication thing, but our love grows deeper every day.

Steve and Cheryl: 49 years of marriage

My family worried about Steve being from a broken home and tried to talk me out of marrying him. Having a very difficult time making decisions for myself, I let my mother influence all of them. I prayed about marrying him and my answer was like lightning. So, he drove all the way out to Utah from California and we decided to elope that Friday!

Ray and Tess: 54 years of marriage

Ray was diagnosed with Alzheimer's four years ago. To this day, no matter what happens to him, if you ask him what he would like to do, he always responds with, 'Whatever Tess wants to do.' That is the one thing he never seems to forget!

Robert and Patricia: 23 years of marriage

We met on a blind date. My niece set us up and we went to Chuck-A-Rama. She didn't like me at all and I didn't like her dog.

Chancey and Bertha: 71 years of marriage

We went on a hike up Mt. Timpanogos in the summer of 1944. Six months later we were engaged. We've worked hard together to raise our 13 children.

Jan and Richard: 65 years of marriage

We met in eighth grade. I asked him out to a Sadie Hawkins dance in the ninth grade. He said he would have to get back to me! We got married right out of high school when we were 17.

Larry and Darylnn: 44 years of marriage

He was actually dating my cousin. My aunt really liked him, so she arranged a party to get them back together. We met at that party and ended up dating. We will be eternally grateful to aunt Dawn for arranging a party that neither of us wanted to go to. We still have a date night every Friday.

Andrew and Norma: 57 years of marriage

We met when I was working at a women's dress shop in California, and he was working next door at a men's clothing store. Every morning we'd both go out to sweep the sidewalk. One day our brooms met. Day after day, we fell in love on that sidewalk in front of those stores. He swept me off my feet!

Alan and Melanie: 11 Years of marriage

This was our second marriage. It is important to be humble and unselfish. The biggest problem is when you think of yourself first. Marriage requires eternal fortitude.

George and Diane: 60 years of marriage

One way we stay unified is just by getting old. We have never been old before, and we are just learning how to be old together. We rely on one another for health issues that come up.

Mervin and Carolyn: 56 years of marriage

We met in an economics class. I was just studying the young lady in the class. Life is so uncertain. You need to have faith. When we got married, we did not have a lot. We just jumped in with both feet and started working. It will always take effort. We are closer now than we have ever been in our entire lives!

Citations: I Documented 609 Years Of Love Stories That Grow Better With Age (BoredPanda)