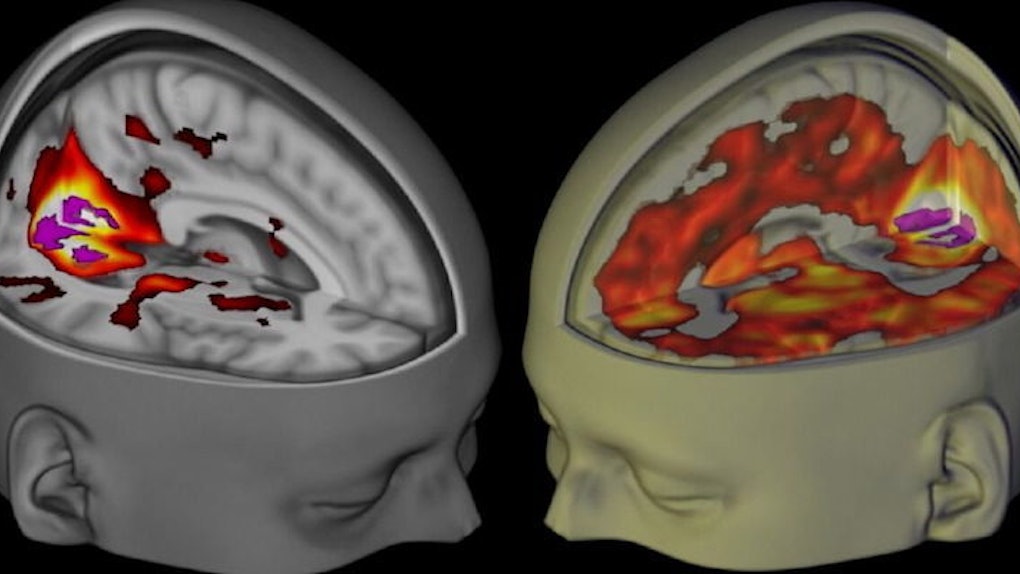 For decades, "hippies" have claimed LSD has the power to unlock your mind. Now, thanks to breakthrough findings, scientists finally have the proof.

After taking a 75mcg dose of the psychedelic drug by injection, 20 mentally healthy volunteers had their brains scanned for activity. The difference in brain activity between those who took LSD and those who took a placebo astounded scientists.

Through three different brain imaging techniques -- arterial spin labelling, resting state MRI and magnetoencephalography -- researchers were able to gather concrete evidence of the profound ways LCD affects our minds. Trippers who hallucinated on the drug drew images from parts of their brain that were unrelated to visual information, producing incredible visions even while their eyes were closed.

No duh, right? Well, scans also showed that, while on the drug, previously unrelated parts of the brain started speaking to one another. Segments of the brain that control vision, attention, movement and hearing became much more interwoven, creating what scientist call a “more unified brain."

But the enhanced brain connectivity is just one facet of the many benefits LSD could have for our minds. Researchers reported disconnected parts of the brain backing up the user's feeling of "oneness with the world," a real result of what they call "ego dissolution" or a loss of personal identity.

David Nutt, a professor of neuropsychopharmacology at Imperial College London and the senior researcher on the study, said of the magnitude of the study,

This is to neuroscience what the Higgs boson was to particle physics. We didn't know how these profound effects were produced. It was too difficult to do. Scientists were either scared or couldn't be bothered to overcome the enormous hurdles to get this done.

Nutt, whose study appears in the journal Proceedings of the National Academy of Sciences, went on to say the drug could possibly reverse the more restricted thinking patterns we develop as we reach adulthood.

This study gives further credit to the theory that LSD and related drugs could likely help with certain psychiatric disorders. As Amanda Feilding, director of the Beckley Foundation, said,

We are finally unveiling the brain mechanisms underlying the potential of LSD, not only to heal, but also to deepen our understanding of consciousness itself.

It looks like Burning Man attendees (along with Silicon Valley micro-dosers) are onto something after all.

Citations: LSD's impact on the brain revealed in groundbreaking images (The Guardian)