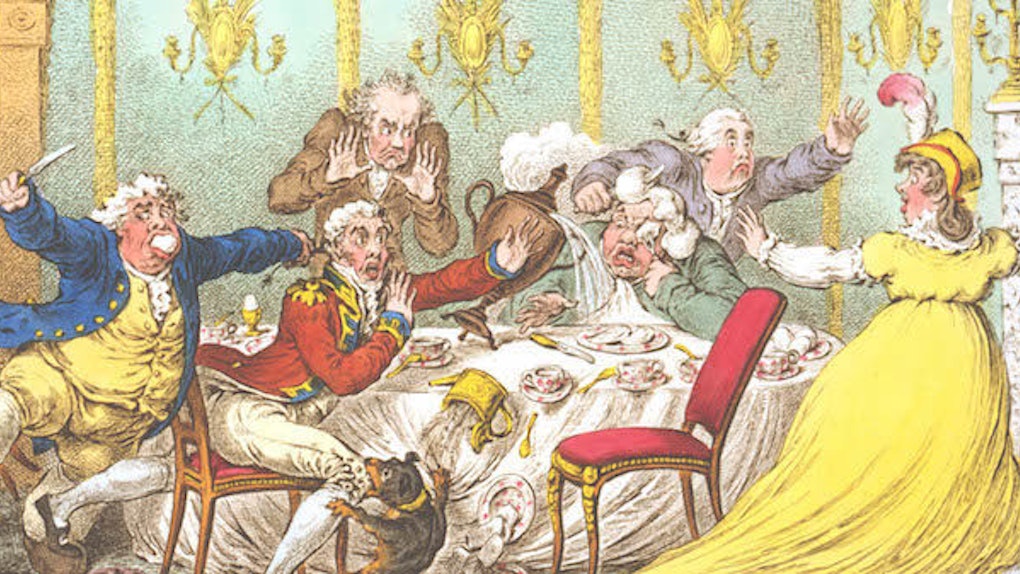 A lot of people who do drugs or smoke weed aren't those who typically conform to societal norms.

They break the law to get the good stuff that takes you deep into your subconscious, and they have a tight-knit society that follows a loosely codified standard of behavior that is passed on by word of mouth, song lyrics, and scenes in movies.

Among these rules are the common motif of sharing, caring and being discreet; if you break these rules, you won't necessarily be sent to jail. You will, however, most definitely not be invited into another smoke session.

Don't be that guy. Be the cool guy.

Be a good host.

If you are going inside a friend's home or inviting a friend over, old or new, you know whether or not they smoke weed. You've discussed it openly, or smelled the loud on the other person.

You know you're both down. No surprises. If you have a bong out on your coffee table, you should offer it to your guests, along with water. ALWAYS HAVE WATER. The rule of being the host with the most is vital.

Smoking weed together is a bonding, intimate experience that can be ruined if water, security, and discretion aren't respected. If the person you invited over doesn't, in fact, smoke weed don't worry.

Offering it was still the polite thing to do—just don't pressure them. Never, ever pressure someone to smoke weed. That is the opposite of our plight.

And no pics without permission!

Sure, tons of people smoke weed by themselves. That's totally cool. But when you bust it out in public, you are now openly inviting others to smoke with you, or you are rude.

Joints and blunts are easy to share and can accommodate a big circle of people without requiring participants to offer to make a salad since it's already rolled.

If you don't want to share, you can text your smoke buddies to join you, make a cool eyebrow gesture or just creepily whisper in their ear to follow you around the corner to smoke in privacy.

If you bring out a glass piece while in a crowd, other people may or may not offer their own weed which could a) piss you off or b) you could make a bunch of awesome friends who are touched by your benevolence and will share with you in the future.

Choose wisely. (Personally, when in doubt, I just share.)

Pass it to the left.

Okay, say you've busted out the joint, and you're passing it around. Two puffs, then pass the Dutchie to the left hand side—Bob Marley made that very explicit.

If you have a story to tell and the weed just moves you to share it, hit the joint first and pass it. Nobody likes a Bogart. People will remember that you do that. Good natured friends will hear you say “Hey, Bogart!” and will apologize and pass the joint with alacrity.

For hotheads, I recommend smoking only glass pieces—then the weed isn't smoldering away with their long, drawn-out story. Side note: If you've been given the honor of greens on a bowl don't torch it; skills with a lighter are necessary.

You want to light only a tiny portion of the weed to take a hit before passing it to the next person who will, in turn, attempt to keep as much green showing when they take their hit, too. See, we're all in this together!

Let people know what they're smoking.

Being super educated about your weed is a newer phenomenon. My mom still has no idea the difference between indica and sativa (sleepy vs upper) and cannot comprehend the concept of terpene content in the strains.

But we millennials and cannabis professionals are all about knowing the strain, who grew it, how it was extracted if it's concentrated and how it's going to make us feel—but you're not required to test someone's blood composition and cross-test it with the strain because grownups can make their own choices.

If you know the strain, tell them. “It's Jack Herer,” you'll say. “Oh! That one makes me anxious. I'll pass, thanks,” your friend will answer. And you will have been a responsible stoner that saved a friend from a few hours of anxiety-riddled thoughts about self-deprecation and failure.

In the same vein, many people are still smoking spliffs (joints rolled with half weed and half tobacco); if this doesn't bother you, just take the joint and be grateful.

But if it's your joint, you should at least mention that it is half tobacco.

The last thing the stoner movement needs is more bad press; so don't be that guy who blows weed smoke in people's faces to either coerce them to smoke with you or just to boast that it's now so much closer to legal that you most likely won't be arrested for it.

That's not our thing. Our thing is inclusion, acceptance, and respect. Same goes for vaping!

Yes, the smell is greatly diminished by the THC oils having been cut with vegetable glycerin or coconut oil or something of that ilk.

The vapor itself dissipates quickly, leaving little trace of itself. But don't be an asshole and puff it in someone's face. And don't vape in someone's car or house without asking.

Just like federal vaping laws that coincide with smoking laws, don't try to vape in places where you haven't been given explicit permission. It's rude.

Guys, this one is SO. SERIOUS. Do not give someone edibles without telling them that they're medicated. Furthermore, if you could identify the dosage before offering it, that would be amazing.

Everyone's body composition is different. Some people who can smoke six joints to the face can't necessarily handle more than a starter's dose of edibles (10mg).

I am one of those people. Someone gave me a cookie at a party once and didn't know the dosage.

I spent the night talking to the ghost of my dead grandmother in a corner by myself for hours. Tell people the food is dosed! Try really hard to buy brands that have their consistent medicated dosage written on their packaging.

Pro tip: If you get too high on edibles, drinking water, eating sugar and taking a Benadryl will help. Also, a little back rub and simple reassurances from friends that you're OK and safe can really help.

Don't ever pressure someone to take a bigger dab.

Dabs are right up there with edibles in the “potentially going to give you a really bad night” category because they can be extremely potent. Like 70+ percent THC; so take that potency seriously!

I once took a huge glob of a dab some guy offered me at a Cannabis Cup.

I was peer pressured when I requested a smaller one.

Long story short, I coughed my lungs out, spent the hour-ride home thinking we were driving “8,000 miles per hour” and then owed my boyfriend $60 to get his car detailed after I T-Rex puked all over it.

Mind you, I've been smoking weed since 2000 and am no amateur.

Dabs do not f*ck around...so don't f*ck around with them. Either decline the dab if you're being pressured, or ask to take it yourself so you can dispense the amount with which you know you can deal.

It's not Jäger, and we aren't in a frat; so knock it off.

Don't judge people who are on other stuff, just help them.

One of the amazing properties of marijuana (besides the litany of medicinal cures) is its ability to bring someone down and stabilize them while they're high on something else.

Whether it's Molly (MDMA), blow (cocaine), acid (LSD), mushrooms (Psilocybin) or something else, weed will alleviate the eye wiggles, the jaw clenching, and the anxiety.

Not that I'm saying I've experienced this personally, but having weed around when rolling or tripping is extremely helpful in preventing you from taking a journey down the rabbit hole.

I'm a fan of carrying around 510 cartridges with vapes and will more than happily share with someone who is rubbing the lining of my sweater and telling my I have the face of an angel.

Weed helps people. If you're going to preach about its incredible gifts, you can't be prejudiced against its cousins that are more psychoactive. Pay it forward to people on a journey, and it will come back around to help you, I promise.

Please consume responsibly. Don't ever dose someone or take pictures of them without their knowledge and consent. Weed is love! Spread it around.

This post originally appeared on The Kind and was written by Adrienne Airhart.

Citations: The New Age Of Weed Etiquette (The Kind)