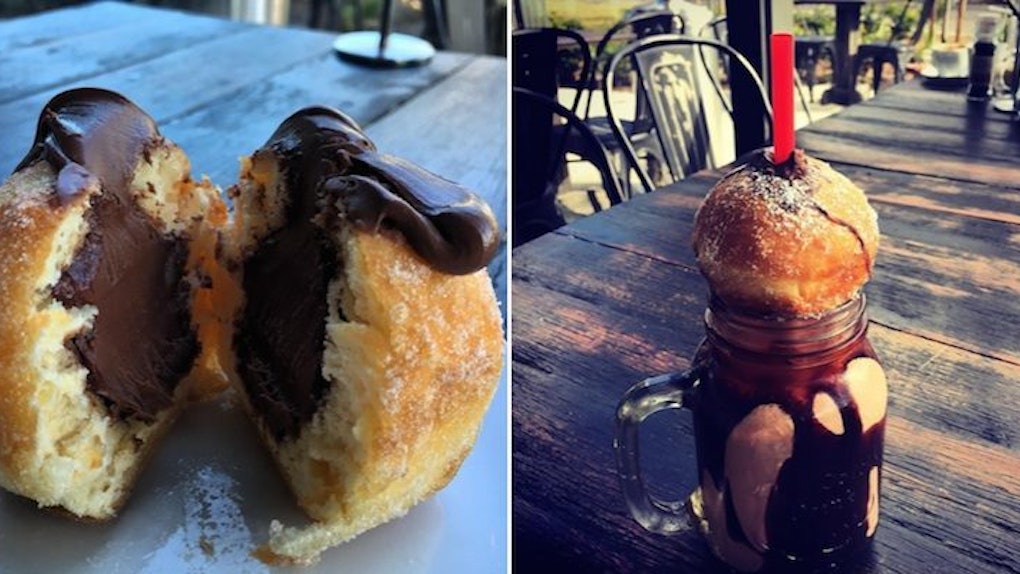 This Mouthwatering Milkshake Is Actually Topped With A Nutella Doughnut (Photos)

Everyone knows milkshakes are pretty freakin' amazing all on their own.

But you know what's even better than a creamy chocolate shake?

An insane milkshake that's not afraid to commit a little dessert-on-dessert crime!

Foodcraft espresso & bakery is the mastermind behind the almighty Tella ball shake, a mouthwatering Nutella milkshake finished off with a glorious sugar-coated, Nutella-stuffed doughnut.

The best part is the straw for this bad boy is actually laced through the damn doughnut, so each heavenly sip of your shake brings the divine taste of the doughnut's gooey chocolate filling along for the ride.

Seriously, I think a lot more boys would have come to Kelis' yard if she was handing out these irresistible milkshakes.

We came up with the shake last week after trying to be creative in the kitchen. It just went mental with customers and on social media over the weekend.

But then again, you can't blame people for going batsh*t crazy over the Tella ball shake because let's face it, this thing basically looks like a mason jar packed with pure chocolate-hazelnutty bliss.

If you're looking to get your hands on one of these handsome devils, you better grab your passport and prepare for a trip down under, because sadly, these shakes are only being sold in Sydney, Australia.

This cool confection was invented by the Sydney-based Foodcraft espresso & bakery and features a frosty Nutella milkshake...

...topped with a fluffy sugar-clad doughnut.

However, these doughnuts aren't your run-of-the-mill breakfast sweets.

Take a peek inside these dough balls and you'll find they're actually stuffed with scrumptious Nutella fillings.

Plus, the milkshakes' straws are laced through the doughnuts, so you get the flavors of their incredible Nutella fillings with every sip.

Citations: People Are Losing Their Minds Over These Nutella Doughnut Milkshakes And We Dont Blame Them (Metro)