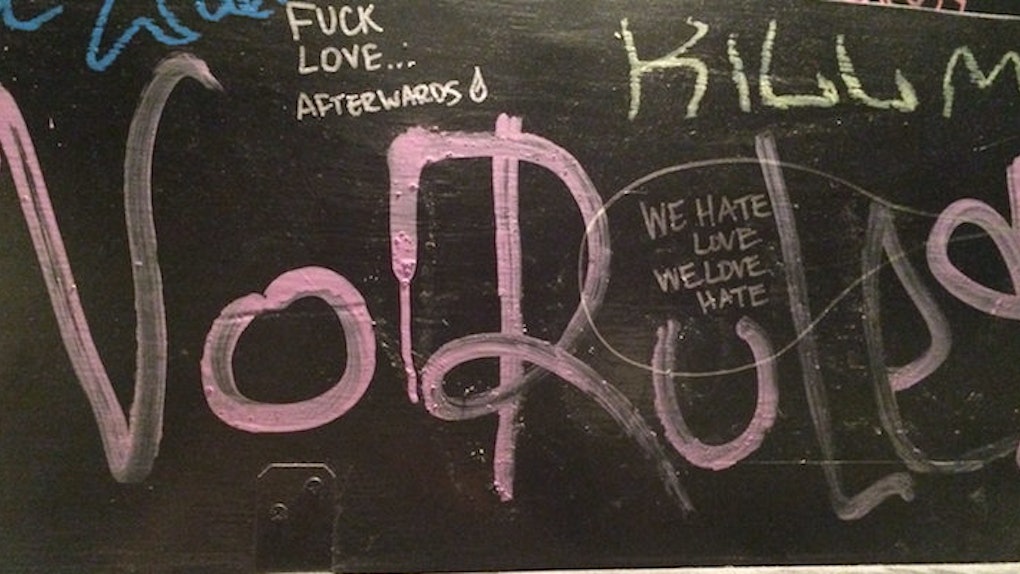 Recently, I paid a visit to the Ruby Room, the one-and-only Hells Angels biker bar in Oakland, California. Would you expect dim, red lighting, heaps of cigarette butts and increasingly sloppy games of pool? If so, you'd be correct.

But a few things struck me as out of the ordinary -- namely, the women's bathroom. While covered in Sharpie graffiti like any respectable dive bar bathroom, the messages themselves were surprisingly progressive.

Here's a lineup of the lessons I learned and hope to impart on you, dear readers.

This is the first and most important life lesson to learn from the Ruby Room women's bathroom. Whether you're downing $4 gin and tonics at a Hells Angels hangout or attending your annoying cousin's wedding, going with the flow will never let you down. Go with the flow or flow with the go. Whichever way you do it, that laid back mentality has been scientifically proven to extend your life.

Sign me up! Why are we all confining ourselves to culturally constructed gender norms? Destroying the gender binary will bring us one step closer to being really cool, altruistic humans of the future. Also, twice the bathroom space = twice the bathroom insights.

I sincerely hope all dogs go to heaven as well. If that's not guaranteed, then I give up on everything. Then again, hell could be cool too. There's only one way to tell, and I'm pretty sure I'm halfway there just by taking iPhone snaps in this stall.

Side note: Was the Zodiac killer here? If so, he likely scored a bump of coke from a couple raver girls huddled over the sink -- regular Ruby Room fixtures.

The battle cry of a generation if there ever was one. Let's bring back "free love" in 2016, only this time with condoms in tow.

Rules? Who needs rules? Nobody at the Ruby Room, that's for sure. I think a subcategory would include the sentiments "f*ck love... afterwards" and "we hate love we love hate." Because there are no rules in love and war. There are only the rules we make for ourselves, which are subject to change upon the tidal current that is self-discovery.

Example: As a general rule, I don't drink more than five hard drinks a night. That's just a personal preference of mine. But I broke that rule on this particular night, and what happened? I killed it on the dance floor. I'm hearing you loud and clear, bathroom proverbs.

Bonus: "No Cigars, No Pot, No Douchebags, Bus Your Own Glasses"

This isn't from the bathroom and you can't really see the sign on the left, but it's as good a philosophy as any. Except for the "no pot" part (pretty sure they're loose about that anyway), I'm all about banning cigars, douches and lazy asses from my life too.

Cheers to you, Ruby Room, for the cheap drinks and a lesson in being badass. For a good time and even better advice, check it out next time you're in the Bay Area. You won't regret it.