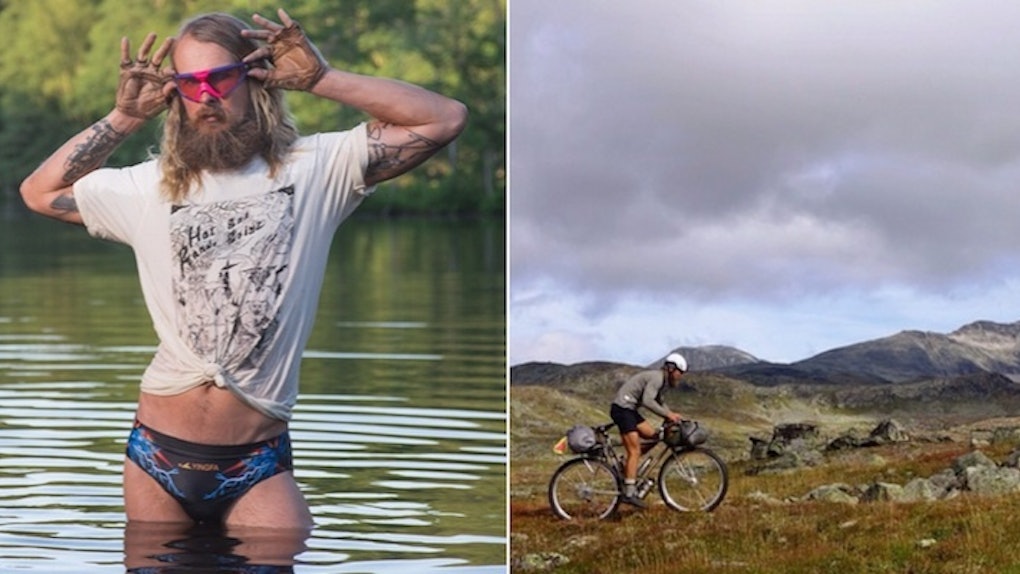 Some people just aren't suited to live the 9-to-5 working lifestyle.

The 35-year-old was going to become a PE teacher or personal trainer until he decided the "American Dream" of settling down just wasn't for him.

Benedict found the corporate grind to be very unfulfilling. So, he took a detour from the normal path in life and adopted a simplified lifestyle that lets him follow his dreams and go on grand adventures around the globe.

In an interview with Business Insider, Benedict said,

We have this preconceived notion of what success is in the modern world. For me, it's part philosophy, part circumstance... I study history and anthropology, and I'm not ashamed that I don't like to work. It's just very unnatural.

Recently, Benedict gained a lot of attention on social media thanks to his impressive Instagram account that gives outsiders a glimpse into his epic, free-spirited lifestyle.

Take a look at the pictures below to see some of Benedict's biking adventures.

This dude isn't your typical 35-year-old from the Connecticut River Valley.

He's a simple guy who just wasn't cut out for a normal working lifestyle.

So, he ditched his day job for an alternative lifestyle that lets him do what he loves most: bike and camp.

Now, Benedict works as a commercial fisherman for six months and spends the rest of the year exploring the world on his bike.

Benedict uses work as a "segue to traveling."

He stashes the cash he earns in small bags that he buries beneath the ground.

He manages to live off $10 a day by purchasing mostly "peasant foods" and yogurt, and he finds the rest of his food in nature.

He likes to spend his nights sleeping under the stars...

...and only slept inside for 14 nights last year.

Benedict has seen some pretty incredible places on his cycling journeys...

...and has no plans of slowing down any time soon.

According to Benedict, "I do love doing certain kinds of work that feel meaningful to me, but for the most part I'm not going to spend the best years of my life doing something completely meaningless."

Citations: Could you have a part-time life? Meet the adventure-lover who only works for six months a year so he can cycle the world for the other half - living on just $10 a day (Daily Mail)