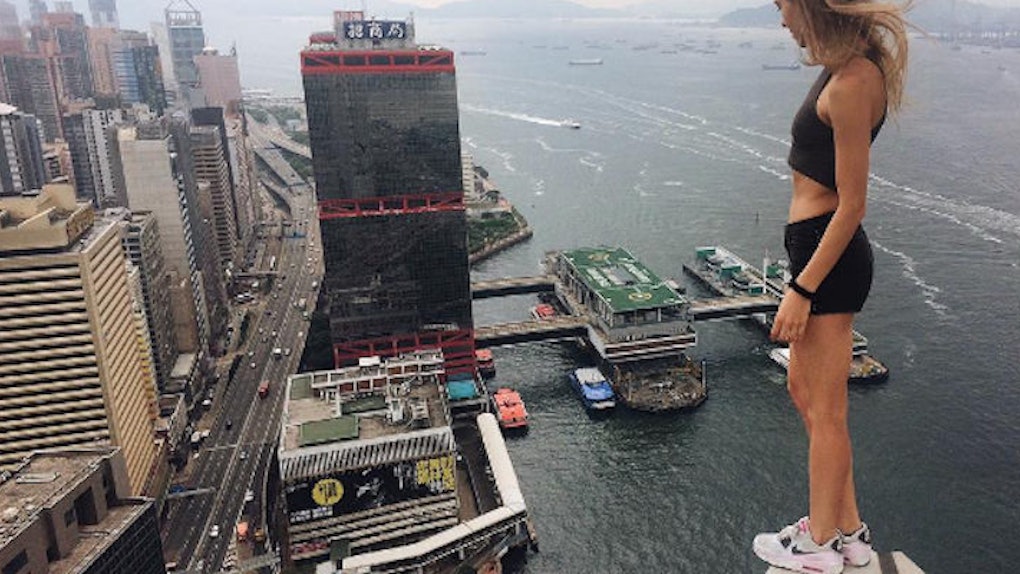 George Herbert Leigh Mallory's famous reply to the question "Why did you want to climb Mount Everest?" was the pithy response, "Because it was there."

I don't exactly know why this Russian woman is climbing enormous skyscrapers, but I think it might be to get more Instagram followers.

Let's be real, this is as equally as valid an answer.

Angela Nikolau climbs buildings like a total boss. After she's done climbing, she posts photos of herself at the top that will make you have the severest case of vertigo.

If you're Lucille Austero, LOOK AWAY.

Let's take a stroll through some of Angela's craziest pictures she's posted and collectively wonder how she's still alive and not flattened to a pancake at the base of any of these monstrous edifices.

If you're down for a fun engagement photo, don't do this one. Ever. Well, don't do it unless you're already married and looking to score big in the will.

Do you think she screams "I AM THE DARK KNIGHT" whenever she reaches the summit of these ridiculously huge skyscrapers? I'm putting the odds at 50-50.

But first let Angela take a selfie, you know, before she eventually plummets to her untimely doom.

Really? Now's the time you take out your phone, pal? Words With Friends can wait. Use two hands.

I look more nervous about falling off the couch than she appears to be afraid of falling off a building while lounging at the top of this skyscraper.

This photo was taken in Moscow. In Soviet Russia, skyscraper climb you! OK, that's not true... But there might be a smaller skyscraper inside of this one.

This is may not be the most opportune moment to take a nap.

JUST STOP! WHO IS MAKING YOU DO THIS?

Citations: Russian Girl Poses On Skyscrapers And You Definitely Shouldn't Copy Her (The LAD Bible)