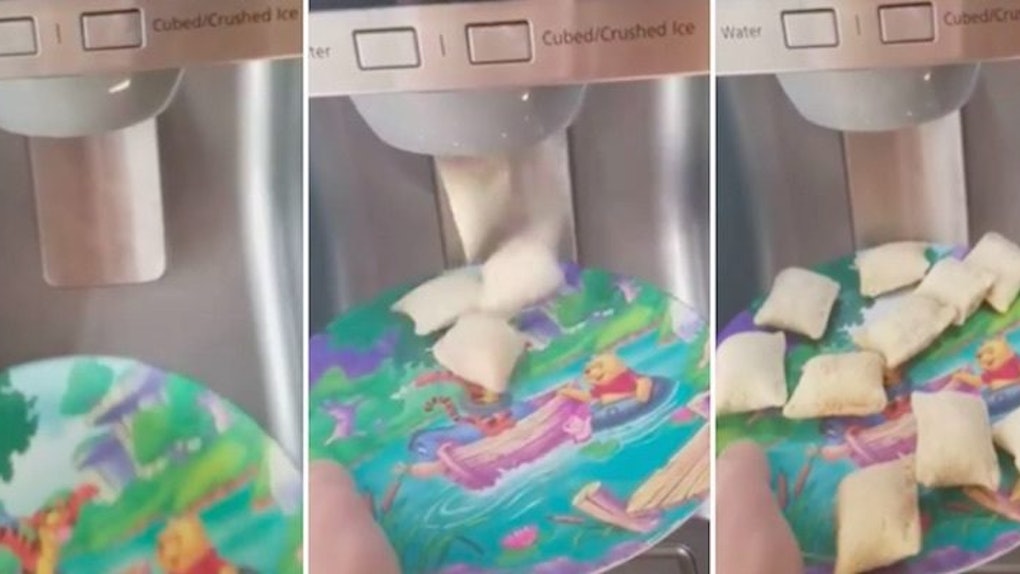 How To Turn Your Ice Machine Into A Pizza Roll Dispenser

There are all sorts of inventions floating around out there.

While a lot of inventions seem pretty useless, every once in a while, someone comes up with an idea for a truly ingenious product that forever changes the way we carry out our daily lives.

Not to mention, the latest and greatest invention to join this list: a pizza roll dispenser.

That's right. An Imgur user who goes by the username reanimatedus recently figured out how to turn a boring old ice dispensing machine into a glorious device that dispenses pizza rolls.

This is not a drill. Some evil genius just invented a pizza roll dispenser and this might just be the best damn thing that has ever happened to kitchen appliances.

I mean, let's be real, who in their right mind would want a fridge that dispenses boring old tasteless chunks of frozen whatever when you could arm your kitchen with an epic fridge that spews out frozen pizza rolls at the push of a button?

Absolutely no one, that's who.

I don't know about you, but if you ask me this clever pizza roll dispenser also seems like it would make drunk eating a whole lot easier.

Pushing a button for your favorite food definitely causes way less of a mess than emptying out your entire freezer in an attempt to find your beloved pizza rolls buried amidst a sea of freezer-burned cardboard boxes.

Plus, this game -hanging idea opens up whole new world of fridge dispensers possibilities that makes use of other frozen food like bagel bites, chicken nuggets or whatever else your hungry heart desires.

So yeah, this person definitely deserves some sort of award for his next-level pizza dispensing device because this thing is basically one of the greatest contributions to mankind.

Citations: The Person Who Turned Their Ice Dispenser Into a Pizza Bites Dispenser Deserves All the Awards (Cosmopolitan)