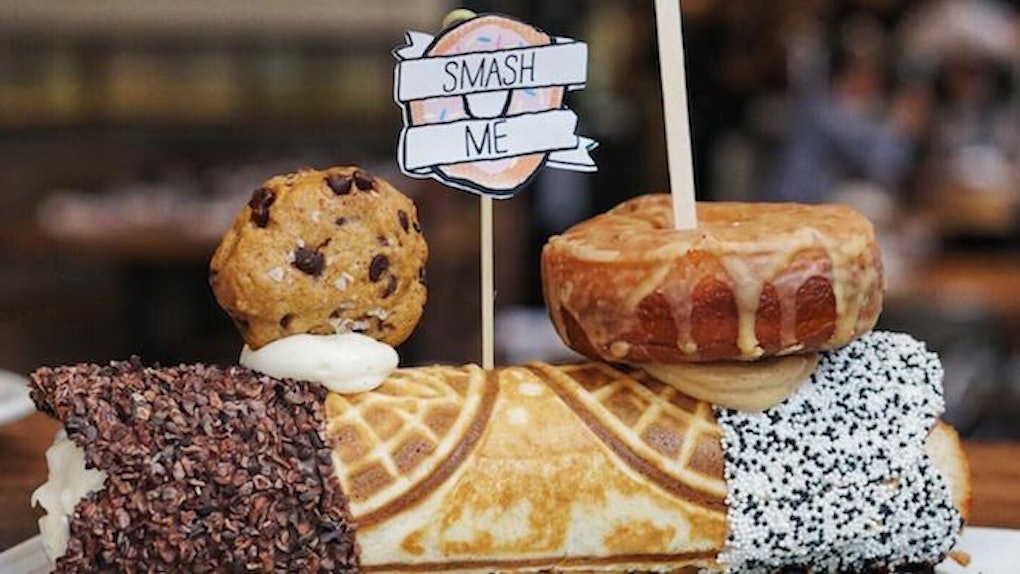 Is there anything more heavenly than a delicious dessert? Obviously not. Gelso & Grand got the memo and decided to take its cannoli creations to new levels. Earlier this summer, the New York City hotspot brought customers the magical, mystical unicorn cannoli that was dusted with edible gold (naturally, a huge crowdpleaser). In celebration of its #CannoliWeek, the restaurant also created five dishes, but didn't offer any of them to customers. Instead, the Cookie Dough-Nut Cannoli at Gelso & Grand -- one of the five concoctions featured on Instagram -- won the  restaurant's cannoli contest and thus became a regular menu item.

Holy cannoli, it's time to indulge. This isn't just a two-bites-and-your-done kind of dessert. This is a multifaceted cannoli that Italians only discovered in their dreams. The dish is a fusion between cookies and doughnuts all while actually being a cannoli, so obviously it's a win-win for all those involved in the eating process.

Let's start with the first side: It features vanilla mascarpone (my personal favorite) with homemade cookie dough and topped off with cocoa nibs, sea salt, and a cookie for good measure. But don't fill up on that too quickly. The cannoli's other end is filled with a Kobrick coffee mascarpone and comes complete with a Cafe Au Lait glazed Dough Doughnut and a coffee stirrer.

You're going to be busy with this dessert. To make the task at hand easier — like with the Unicorn Cannoli — Gelso & Grand will offer a tiny hammer that let's you smash the dish. Let it all out on the cannoli, baby. Let. It. Out.

If you're looking to feel satisfied with the fall season that's upon us, this cannoli stuffed with goodness will certainly leave your belly stuffed -- but it's probably a task you're willing to take, so see you in line!

Elite Daily has reached out to Gelso & Grand for comment but did not hear back by the time of publication.