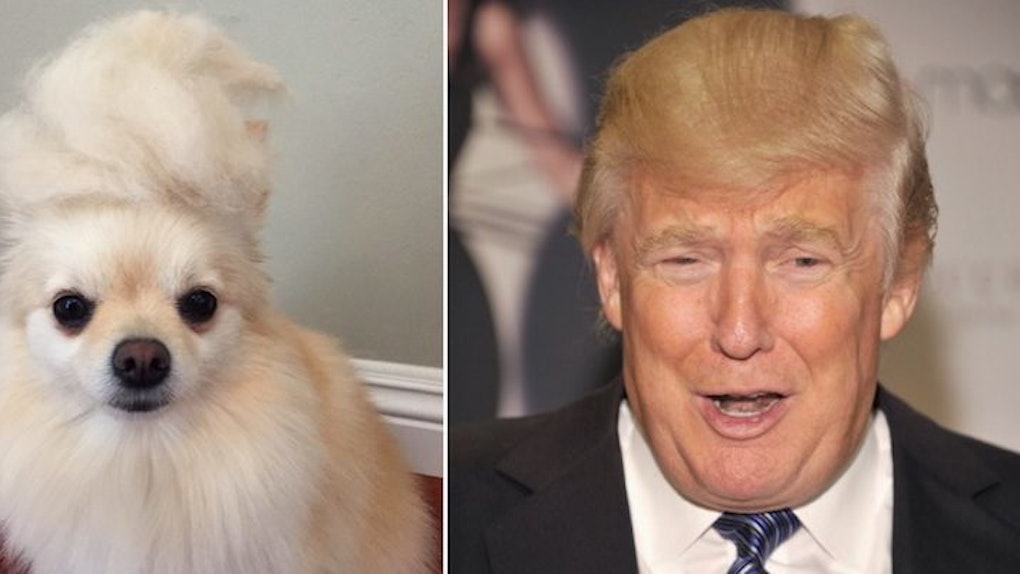 Donald Trump has always been known for his eclectic taste in hairstyles.

For years, I've been trying to figure out what the hell is actually on that man's head.

Is it a toupée? A horrid comb over? A combination of both? I guess we'll never know.

But honestly, with all that money, you think he would invest in a better hair stylist.

Last week, we showed you the #trumpyourcat trend, where a bunch of creative cat owners gave their furry little friends hilarious makeovers inspired by the Donald's 'do.

If you thought that was the most entertaining thing to happen on the campaign trail so far, you'll be glad to know those fabulous felines aren't the only animals poking fun at Trump's toupée.

Now, dogs owners are determined to transform their precious pups into Donald doppelgängers by topping their heads with all sorts of comical comb overs and furry wigs.

Yep, #trumpyourdog is the newest trend taking over Instagram, and let me tell you, these political puppies make Trump's hairstyle look even more hilarious than those kitty candidates did.

Seriously, how could you not vote for a pup that looks this doggone good?

Take a look at the pictures below to see the #trumpyourdog trend.

There's no debate over whether or not these fur-styles look flawless.

Seriously, the Donald has nothing on these doggy doppelgängers.

If you're looking to join in on the furtastic fun, you'll be glad to know it's easy to #trumpyourdog.

All you have to do is brush your mutt's mane into the perfect, hideous comb over...

Or you can also take some extra fur...

Mold it into a fierce Donald-esque toupée...

...and plop it right on top of your pup's precious little head.

Aside from looking downright adorable...

...and it's pretty much guaranteed to make your dog's tail wag.

You're fired, Trump! These barking bosses are the new top dogs of the toupée scene.