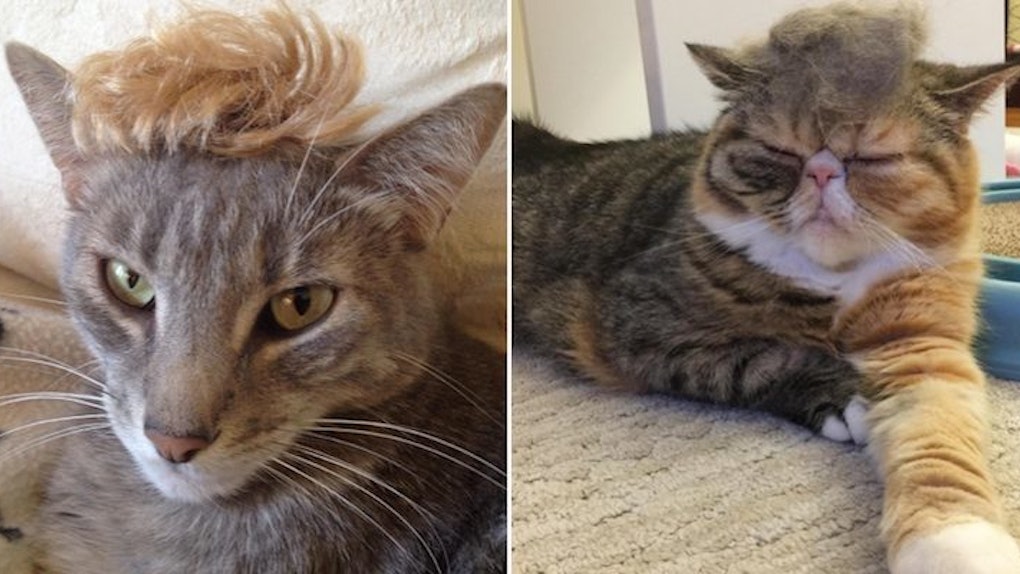 For as long as anyone can remember, Donald Trump's horrid toupée has been the butt of countless jokes. Take a good look at it, and it's clear why.

This week on social media, poking fun at the Republican's 'do reached new levels as cat owners with a lot of time on their hands debuted #trumpyourcat.

It is, in essence, exactly what it sounds like: turning your furry friend into a Trump doppelgänger, with the help of a little extra fur (which, in this heat, is not hard to come by).

Want to join in the fun?

Simply brush your cat and mold some of that fluffy, recently shed fur into an awkward Trump-esque toupée shape. Place it atop the feline's noggin, et voilà! You've Trumped your cat.

If you need a little more direction, look no further than the photos below -- we've even thrown a few Trumpdawgs in there, for good measure.

The trend involves taking extra fur and making it look like a bad wig...

...by placing it on your pet's head, à la Donald Trump.

The trend is blowing up.

In fact, cats everywhere are being Trumped as we speak.

And that number is growing quicker than a kitty on steroids.

If you don't have a cat, worry not.

Dogs can be Trumped, too...

...as can all other furry critters.

So, next time you have to brush your pet...

...take the extra step and Trumpit.

You won't be sorry.

Citations: Give your cat the gift of Donald Trumps hair with TrumpYourCat (Mashable)