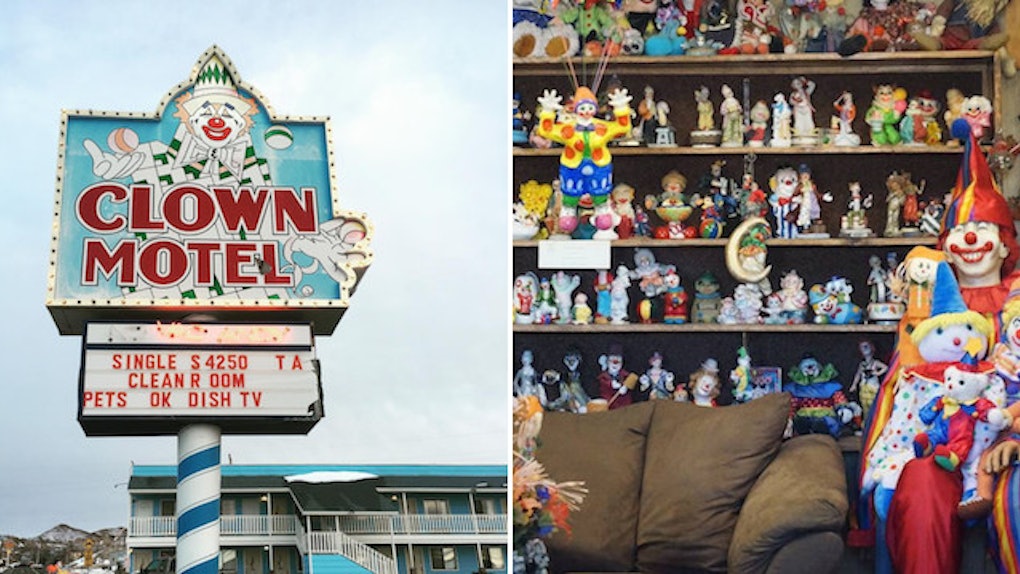 Clown Motel With Creepy Dolls Will Haunt Your Nightmares

Unless you were living under a rock last year, you know there was a rather strange abundance of clown sightings throughout the country months before Halloween (when spotting a clown isn't such a big deal).

Countless sightings were reported to local police just about every day (and night) with no signs of slowing down. As a matter of fact, there were SO many clown sightings in 2016, someone actually created a clown sightings map.

If you weren't able to get your clown fix last year, you might want to visit this creepy clown-themed motel in Nevada.

It's simply called the Clown Motel, and it's located in the town of Tonopah.

You've probably never heard of it, and that's what makes things even creepier.

Now, this isn't your already-sketchy Motel 6 in the middle of nowhere. The Clown Motel makes a Motel 6 look like the famed Waldorf-Astoria 20 years ago -- so safe, so untouchable and not creepy at all (just a little haunted).

The Clown Motel has been in business over twenty years but has been updated and remodeled into one of Tonopah's best and most interesting motels. We have a total of 31 rooms, both smoking and non-smoking.

Oh, wait, they forgot to mention non-dreaming... Nightmares only!

The Clown Motel in Tonopah, Nevada is a real place with creepy clowns littering every square inch of the property.

If 2016's clown sightings weren't spooky enough for you, this will certainly do the trick. Just look around...

There are more than 500 clowns showcased in the motel office alone. Stephen King would be SO proud!

Close your eyes and imagine being trapped here for the night after experiencing car trouble nearby.

Just in case you forget where you are, there are obvious reminders on the door to each room.

Care for a clown nose? It might help you blend in and go unnoticed by the clown gods.

As if this weren't creepy enough, the Clown Motel is conveniently located right next to a cemetery.

If you're ever in Nevada and you need a place to stay, don't hesitate to book a room here. Your nightmares depend on it.

As creepy as this place is, it honestly looks and sounds pretty freakin' awesome, too. Plus, who doesn't like a good nightmare every now and then, you know, to keep things interesting?

Citations: Would You Rather Sleep In This Clown Motel Or Get Eaten By A Bear? (Bored Panda)