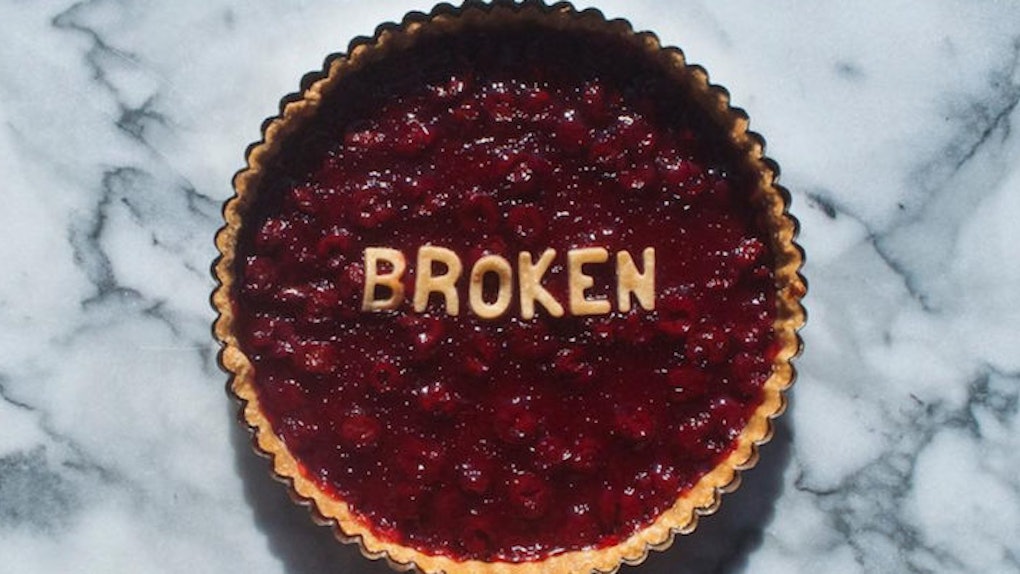 What Should You Do After A Bad Breakup? Turn That Broken Relationship Into Art

If you haven't been to the Museum of Broken Relationships yet, go. It's a heartbreaking, uplifting, mind-altering experience rolled into one leisurely gallery stroll. Unlike most museums, you actually want to read the blurbs next to the pieces because the effect is profound and worldview-shattering. Not to oversell it or anything, but it'd be difficult to leave unchanged.

In the midst of last week's opening, Elite Daily spoke with Alexis Hyde, the director of the Museum of Broken Relationships, about how relationships are defined and what it means for one to be broken.

Hyde has been working in the Los Angeles art world for about 10 years. Throughout her career, the roles she's taken have run the gamut from managing artist's studios to directing galleries and being a project manager on various installations. But the underlying theme to her body of work, she says, has been "the improbable." To the question "Can we do it?" Hyde's trademark answer has always been "We'll find out."

As for the overwhelming amount of interest that came their way after announcing the project, Hyde says she was hoping to get 50 donated pieces at most. Surprisingly, she says,

We've gotten 300 and they're still coming in the mail.

With the wealth of material she and her team had to sort through, Hyde says it took some work to curate the best, most thought-provoking pieces. And, like most breakups, they required time to pick up the pieces.

The wonderful thing is we had time with these stories because we started our call [for submissions] in February. So we were able to live with them and see what resonated with us. If I read this story today, am I still thinking about it next week?

From there, they decided which pieces would work best together as a cohesive installment. While the collection can be enjoyed from any starting point and observed in any order, it's the experience as a whole that leaves a lasting memory. Even Hyde couldn't have anticipated the impact of the final product, saying,

I was blown away in a way I could have never been prepared for. You know, I was just punched in the gut, heart ripped out [and] uplifted, though -- all at the same time. I floated out on the cloud of possibility and bravery and human connection that I couldn't have ever prepared for, and it was just amazing. I thought I knew what I was getting into and I had no idea.

Hearing that, you might assume these objects to be priceless, one-of-a-kind items. In reality, the bulk of the pieces would be unmemorable if it weren't for the stories behind them. They speak less to those special occasions and more to our everyday lives. As Hyde says,

One of the most profound things that I've noticed is that a lot of these stories aren't birthday gifts, they're not anniversary gifts, they go into the everyday nature [of] relationships. It takes that. You can't just have one vacation and then everything's fine for the next year. It's the daily things that matter, and it's the daily communication.

It is in those countless unremarkable moments that all relationships either thrive or flounder. But when that bond dissolves, it can be hard to let go of the little things that proved it ever existed. While we've been told time and time again to shirk the physical baggage of broken relationships, the reality of moving on is much more complicated than filling boxes destined for Goodwill. On that point, Hyde says,

The interesting thing about these pieces is that most of them aren't very big. It wouldn't take up a lot of space in a drawer or in a closet or just in your life necessarily. But I do know that some people like to do the slash and burn, and that's fine. And when it comes down to it, all these people thought, 'This is the time for me to let this go.' So they didn't keep it at the end of the day. And they feel better for it.

Just knowing those objects will take on other lives can be part of the healing process. It'll also change the way you look at thrift stores forever--it's up to your imagination to decide whether that's for better or worse.

Clearly, there's a long history of people being intrigued by the personal stories behind everyday objects. Hyde recalls one story in which a writer did an experiment on eBay by writing fictional personal stories in the descriptions of some of the items he was selling. He found that those items sold for more than they would have had he not added something personal. The same could be said of the character (or lack thereof) in new houses versus old.

Which brings us back to the museum's primary message. While the theme may center around breakups, the overarching tone is anything but negative, as Hyde explains,

It's easy to look at the name [of the museum] and the topic and think, 'Oh, this is a depressing thing.' And it's not. I think it's very uplifting, personally. I think that you see you're not alone. We're all doing this together. We're all looking for the same things, and no matter who you are or where you are, we all bleed red. Our hearts all beat for the same reasons.

You can plan on catching the current installation for six months until they begin rotating in new pieces. The call for objects, Hyde says, is always open, so if you have an item and a story to tell, send them her way.