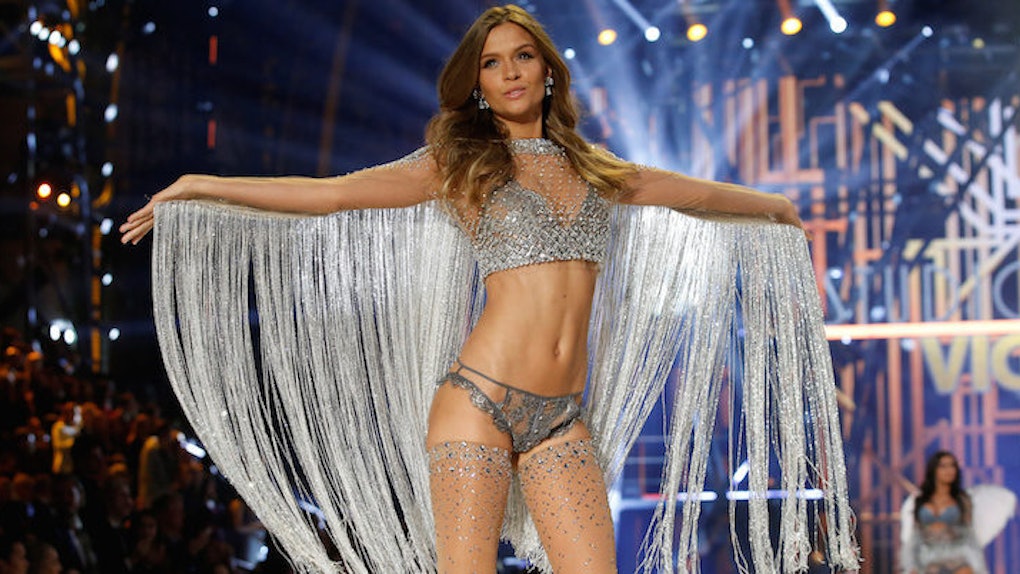 After three years on the runway, Josephine Skriver officially earned her wings at this year's Victoria's Secret Fashion Show.

Skriver, 23, has walked consecutively in each show since 2013, and this year she not only had the honor of wearing her first set of feathered wings, she also wore the coveted Swarovski crystal wings for the 2016 show.

These impressive wings are dripping in 450,000 crystals and weigh 10 pounds each, although Skriver made them look as light as a set of feathers while walking on November 30 at the Grand Palais in Paris, France.

Elite Daily had the chance to speak to Josephine immediately after the show about her pre-show workouts, experience on the catwalk and opinions on social media.

Presumably, wearing 10 pounds on each arm is no easy task. We asked Josephine how she prepared to carry all that weight -- while walking in heels, no less.

I workout all year round, I love it... it's my therapy. But for this show you want to be strong. I add on a lot of weight, I lift heavy. I was born a stick, I need to work on my shape.

Her seemingly effortless walk down the runway made it clear her workouts paid off.

Josephine has over 2.8 million followers on Instagram and is definitely a fan-favorite. We wanted to know how Skriver thinks social media has changed the perception of models in recent years and added to the hype around the Victoria's Secret Fashion Show.

I think Victoria's Secret has always been really good about putting the names of the girls out there and making it exciting. I think they were doing it before social media, so I think social media has amped it up so much more. I love it because it's given models a voice back, it's getting us not just fighting to make the campaigns… now we get to have a voice and now people care and it's really, really cool to see how much people are interested in fashion.

Almost every Victoria's Secret Angel and model rake in millions of followers, and it's obvious the annual excitement around the show is driven by the behind-the-scenes looks at the models' pre-show preparations.

It's no secret each VS Fashion Show gets bigger and more extravagant with every passing year, although each show continues to seem impossible to top.

Regarding her excitement and feelings about this year's show, Josephine said,

This was my first year as an Angel, so that was a big, huge difference for me. I got to [open] a segment, I had my first pair of wings on and I had the Swarovski crystal outfit, so it was kind of a mind-blowing night, to say the least. And just being in this iconic building, being in the City of Love, I don't think you could've put pieces together to make it any better.

Make sure to tune in and watch the Victoria's Secret Fashion Show for yourself on December 5 on CBS -- I can tell you firsthand you will not be disappointed.