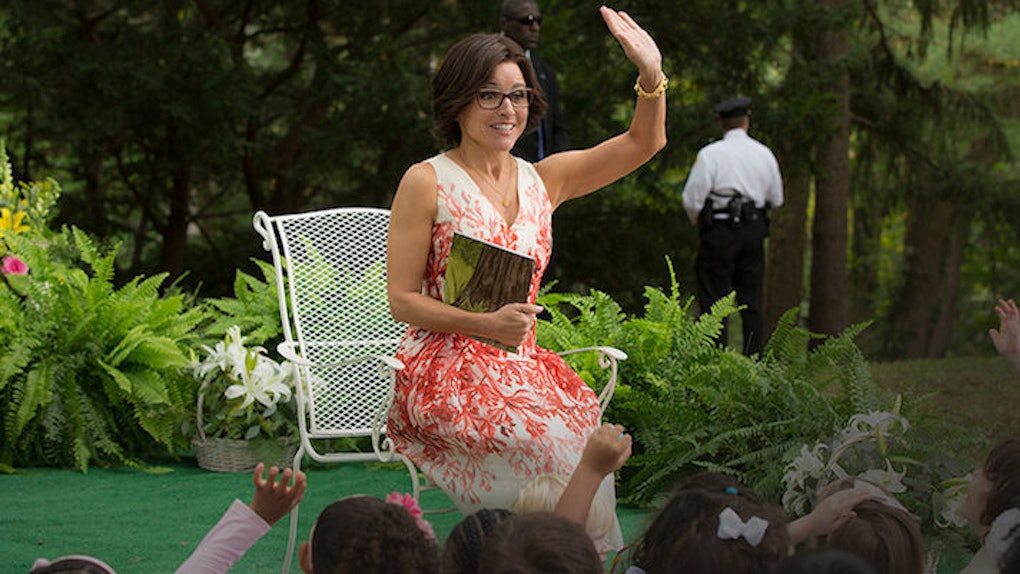 "Veep" is one of the funniest shows on television right now, and if you haven't yet had the chance to watch it then you're seriously missing out.

The show follows Selina Meyer, a fictional vice president of the United States.

The series was created by Armando Iannucci, and is based on the British comedy series, "The Thick Of It."

"Veep" will compete for two prizes at the upcoming 22nd Screen Actors Guild Awards (better known as the SAG Awards).

The ceremony, which will take place on January 30, 2016, will see Julia Louis-Dreyfus battle it out for Outstanding Performance by a Female Actor in a Comedy Series.

Additionally, the whole cast is nominated for Outstanding Performance by an Ensemble in a Comedy Series.

With these awards looming, let's take a look back at some of Selina's funniest moments from the past four seasons.

Warning: The show features a fair bit of profanity.

1. When she delivers this powerful line ever so eloquently.

HANDS DOWN this is one of the best lines that was ever said in the first season.

It happens when Dan Egan, Deputy Director of Communications, tries to use the heavily-badmouthed and unlikable Jonah Ryan, White House liaison, for intelligence.

This clearly doesn't go down well with Selina, who delivers this hilarious insult, and then ends by tripping over a pile of papers.

2. When she speaks to her people in the sweetest way she can.

I'm the Vice President of the United States, you stupid little f*ckers! These people should be begging me! That door should be half its height so that people can only approach me in my office on their goddamn, motherf*cking knees!

Knowing how much power and authority you have perhaps comes as part of the role of being the Vice President, and Selina Meyer seems to have that part of the job criteria pretty much nailed.

Again, another infamous quote from season one after Meyer gets infuriated with her colleagues.

3. When she helps Gary get through his nose bleed.

This may be one of the funniest scenes of all time, of course thanks to Selina.

When Gary gets too "excited" and gets a nose bleed, Selina does her best to comfort him.

She ends up going through his bag and finding the weirdest f*cking things, which makes the scene even funnier to watch.

It would be amazing to find out how many takes it took them to film.

It's also worth pointing out that this particular episode helped Dreyfus win an Emmy award. You can check out the full scene here.

4. When she basically has to explain gravity to a chicken.

When trying to explain to her temporary assistant that the senator's swearing-in ceremony is impossible to move, Selina delivers this perfect insult when she realizes she's getting no where.

Check out the full clip here.

5. When she provides us with an in-depth understanding of what democracy truly is.

Do you like your democracy served up with a slice of Selina Meyer-sized fury?

In the season four finale, upon waiting for each state result to be called, Selina gets a little bit stressed out.

6. When she tells us "the drugs stop here," and means it.

Just another example of comedic timing and just how Selina can never ever catch a break.

Even when the line isn't necessarily laugh out loud funny, the delivery and execution are what makes it hilarious.

7. When she gives the perfect response to her new nickname from the press.

Whilst flying over to Finland to do a bit of damage control, Amy informs Selina that the European press have started to give her a new nickname, "The Euro-phobic Khaleesi of DC."

8. When she becomes a meme and it's just too much.

We've all had it, the unfortunate photo of us circulating on the web.

It's a slightly bigger deal when you're the vice president, and Meyer has to deal with the fact a photo of her looking at her phone has gone viral.

9. And last but not least, when she shares this intimate visual with all of us.

Thanks for the laughs, Selina. You're the greatest.