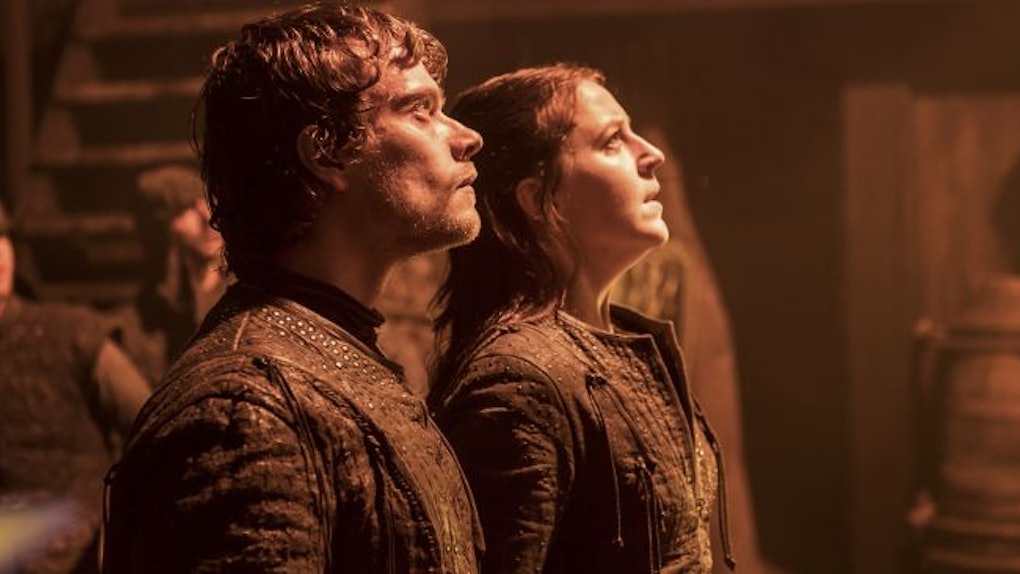 In episode 2 of Game of Thrones, Euron Greyjoy attacked the Ironborn fleet as they headed towards Dorne, killing off two Sand Snakes and taking the other two, plus Yara prisoner. Theon was given the chance to rescue his sister, Euron invited him to try. To run at Euron, and most likely be slaughtered, in a foolhardy chance to rescue her. But though that would have been the "honorable" thing to do, instead, he jumped overboard. Why? And what happens to Theon now? According to one theory about Theon on Game Of Thrones, it may be worse than we thought.

In that moment on the ship, I noted Theon seemed overcome with a case of PTSD. Battles like that are triggering for someone who has been through what Theon has. The fire, the screams, and the smell of blood would have all taken him back, suddenly, to being tortured in Winterfell by Ramsay Bolton.

Instead of trying to rescue his sister, he leaps away. And this week, when he was pulled out of the water by one of the surviving Ironborn ships still loyal to Yara's cause, there was something not right about him. His face twitched. His skin was clammy, his eyes looked like they were ready to pop out of his head. His voice shook in a way we haven't heard since Season 5.

Now, some of this might be due to having spent hours in the water. But that facial twitching he was doing in the scene? Those are the hallmarks of his Reek character.

Could Theon be retreating back into Reek after losing Yara this way? As we saw last season, she was his anchor. She was the one who believed in him and helped him come back to himself after all those years being brainwashed by Ramsay into a servant.

Losing her so traumatically and having to abandon her because he couldn't stand and fight would be just about the worst thing that could happen to Theon. It would shatter his nascent, returning self-esteem. Let's hope he pulls back out of it in the next couple of episode, lest the Ironborn find him curled in a corner whispering: "Reek, Reek, rhymes with freak."