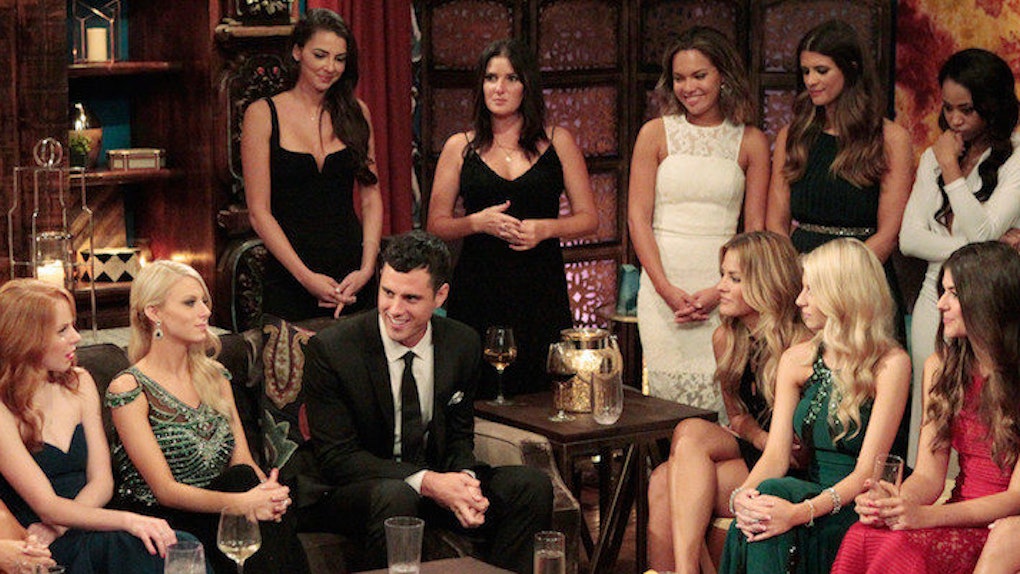 Where is the love?

This past Sunday, January 3, the premiere of "The Bachelor," featuring Ben Higgins, aired.

Throughout the episodes, it is inevitable that you tend to reflect on your own love life as you’re hoping these strangers find love in the most bizarre setting.

You begin to wonder, is this love is now?

And honestly, the show doesn’t seem to differ that much from today's dating games.

In the age of noncommittal and digitized members of Generation-Y, there is a sense of detachment when it comes to pretty much anything.

We act mainly out of self-interest, and it becomes hard for all of us to compromise even on the little things.

With that being said, here are all the reasons why, for Generation-Y, "The Bachelor" represents everything that dating is about now.

1. There's a lack of chemistry

Ben Higgins, along with all the other bachelors and bachelorettes, is simply handed a platter of 26 people to chose from.

The casting department is in charge of screening through thousands in order to make their best guess as to what is right for Ben (and best for ratings).

And although it isn’t a scripted series, the interview process and cheesy home videos doesn’t allow for much natural behavior.

In today’s generation, our version of dating isn’t that natural either.

Gone are the days of bumping into a stranger and grabbing a number for a date.

Because we are so plugged in, this adversely affects our in-person relationships, meaning when we actually come across someone interesting, we are often frozen and can't make a move.

So we settle for our friends and family to do the matchmaking for us.

As I said, the bachelor/bachelorette is given a large some of people who hope that by the end of the night, they get a rose.

It’s a nice idea, truly, even some would say romantic. But this rose has become the ultimate symbol of stay and fight for love or see ya, it was good knowing you.

I don't know about you, but Tinder is definitely ringing a bell here. The only difference is, the one swiping (the bachelor with the roses) is the only one in control.

Failure to get a rose as the episodes go on is basically the equivalent of an unmatch on Tinder.

3. Everyone's fighting for the same person

In today's culture, beauty ideals are lumped into such specific types, it’s hard to find someone that not everybody is interested in.

We all know that girl or guy who legit everyone thinks is perfect, so you find yourself at parties fighting for his or her attention in a swarm of other people with the same goal.

In "The Bachelor," all of these girls are fighting for that same guy, and you’re forced to metaphorically watch the love of your life fall in love with other girls behind the television screen.

This may be specific to this particular episode, or the others just kept their stalking habits quiet, but in the premiere, we watched some girl fess up to Ben that she had the unfair advantage because she had two months to cyber stalk before the show.

Following this, she proceeded to tell him his favorite hobbies, the members of his family and pretty much everything but his social security number.

We all do it, maybe not to that extreme, but it happens.

Most of us would like to call it “research” because we know it’s wrong.

Often, people cyberstalk a date before it happens, a person they legit just met or continue this bad habit even once they start dating.

Even though it’s public information, you should want that person to trust you enough to share things with you personally.

Essentially this is the same thing as cyberstalking, but in the abridged version, this is your profile page at a glance.

On "The Bachelor" all these girls present a brief background story of where they are from, what there intentions are with Ben and what they see in the future.

Put that all on the Internet and bam, you’ve got your profile page on social media.

On the main screen you put your best self forward, the self you want people to see, regardless of what really lies beneath.

You are practically saying, “this is what I want you to think the real me is.”

As much as we all want to be contestants on the show, the one thing that still bothers everyone is how fast the bachelor or bachelorette eventually takes the relationship while dating multiple people.

How they have the mental capacity to engage in relationships with that many people?

But if you think about it, Generation-Y is doing the same thing constantly.

We all enter romantic relationships in this weird phase we call “seeing each other" -- whatever that means.

Nobody really dates anymore, and when we do it takes months to feel comfortable with giving what you have a label.

Both parties unfortunately start with the distrusting assumption that the other is probably dating or f*cking others, so you don’t get comfortable at the thought of being monogamous.

7. One person has all the power

The premise of the show is that one person is on the search for love and the contestants are there to fight for them. The bachelor or bachelorette has ALL of the control, and as the audience, we accept it.

Still to this day, people are fighting for equal love. Whether it is for the larger issue of the LGBTQ+ community not receiving fair rights because of conservative straight people, or within relationships striving to both have a say.

Often there is an imbalance of power and someone is always “whipped,” but we accept it.

Moral of the story is while we make fun of the ridiculousness of reality TV, and the cheese factor of "The Bachelor," we may be glued to our TVs because we see these people in ourselves.

For the sake of future generations, Gen-Y must stop questioning things, and simply let love happen.

Otherwise, we just become the product of reality shows like "The Bachelor," which is fine on TV, but definitely not something we should strive to accept IRL.