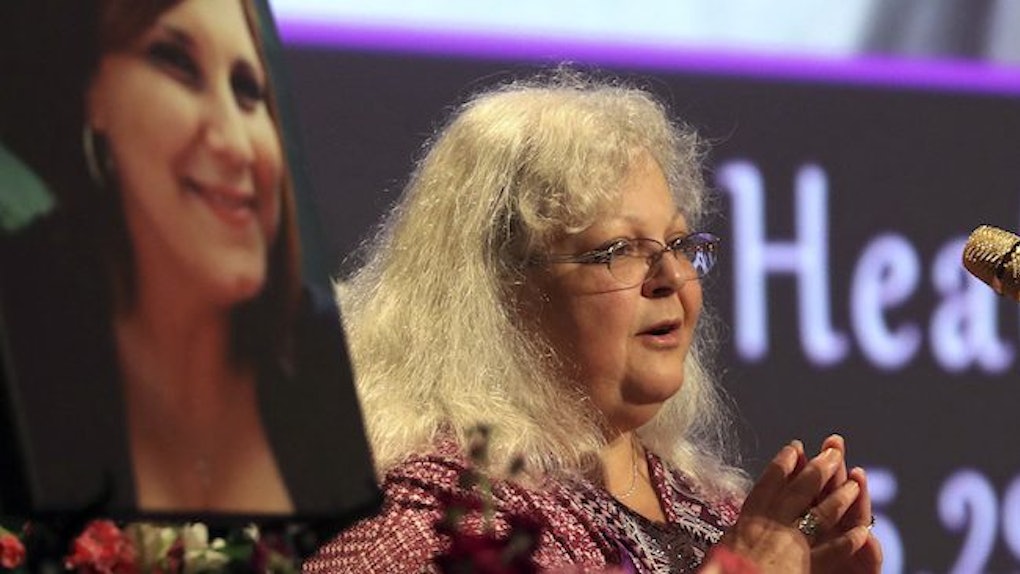 The MTV Video Music Awards on Aug. 27 were a time for artists to shine. But after the violence in Charlottesville, Virginia, two weeks ago, it seems clear that there's no part of our lives that is completely separate from politics — particularly when it comes to art. So when Susan Bro, Heather Heyer's mother, appeared at the VMAs to announce that all six of the nominees for Best Fight Against The System had won the VMA, it was heartbreakingly fitting.

As she prepared to present the award, Bro spoke about her daughter. She said,

Only 15 days ago, my daughter Heather was killed as she protested racism. I miss her, but I know she's here tonight. I've been deeply moved to see people across the world — the whole world — find inspiration in her courage. Today, I'm announcing the launch of the Heather Heyer foundation.

In a statement before her VMAs appearance, Bro said that she had committed herself to “making [Heyer's] death count." The foundation in her daughter's name will provide a scholarship program for people “passionate about positive social change.” Bro said in a statement before the show,

I can think of no better platform to promote this foundation to the world than at the MTV Video Music Awards. It's going to be an honor for me to be presenting the Best Fight Against The System award there tonight.

She announced that MTV had decided that all six of the nominees had won the award in honor of "many ways to show diversity" of social issues. She congratulated them, saying that she looked forward to seeing how their work would "make the world a better, kinder place."

The Best Fight Against The System award is a new category for 2017, and is meant to reflect "the audience's passion and activism surrounding environmental justice, immigration, LGBTQ equality, and racial justice," per a statement from MTV. The 2017 nominees were Logic ft. Damian Lemar Hudson for “Black SpiderMan” (about race & LGBTQ issues); The Hamilton Mixtape for “Immigrants (We Get the Job Done)" (about immigration); Big Sean for “Light" (about race); Alessia Cara for “Scars To Your Beautiful” (about body image issues); Taboo ft. Shailene Woodley for “Stand Up / Stand N Rock #NoDAPL” (about environmental issues); and John Legend for “Surefire" (about immigration and Islamophobia).

Bro's daughter, Heather Heyer, was killed on Aug. 12 after a white supremacist rally in Charlottesville, Virginia, when a man drove a car into a crowd of counter-protesters. More than a dozen people were injured, and Heyer, 32, was killed.

In the days after Heyer's death, Bro has spoken fervently about her daughter's legacy.

Via a spokesperson, Bro said the day after her death that her daughter “died doing what was right,” and spoke about the effect of her fatal protest at Heyer's memorial service.

“They tried to kill my child to shut her up,” Bro said, per The Washington Post. “Guess what, you just magnified her.”