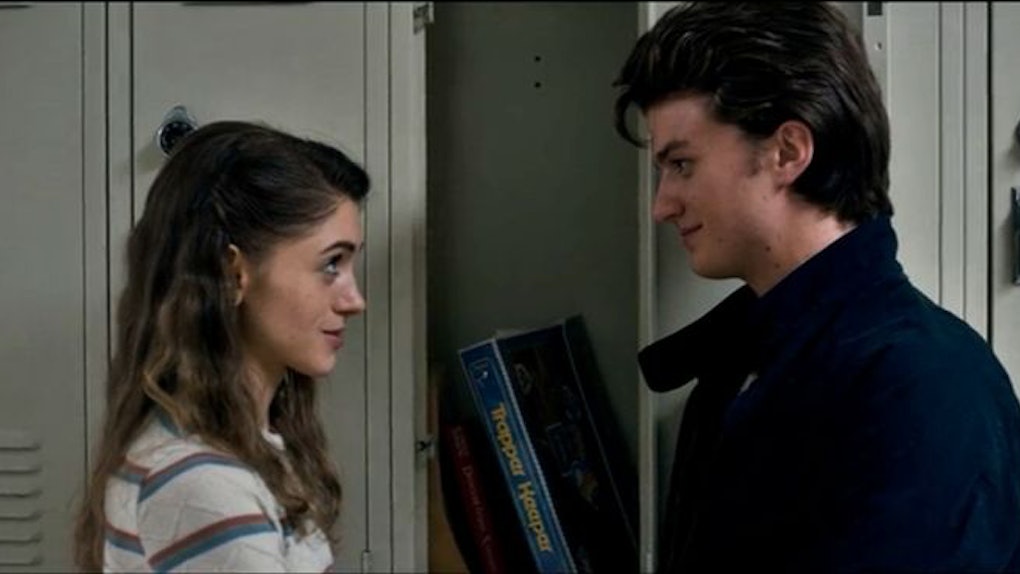 When most people think of the Netflix show Stranger Things, they think of all sorts of 1980s stereotypes. From sci-fi movies like Altered States, to kids movies like The Goonies, to classics like ET, there are so many '80s pop culture references, it's a little bit like a love letter to growing up in a time when playing D&D was not cool. But did you realize that there's another major '80s culture reference going on in the series? The teenage romantic comedy. It's all there in the Stranger Things Season 2 rom-com trailer.

I know, you're really not sure about this, are you? After all, this isn't the show that's bringing back Molly Ringwald into pop culture -- that's Riverdale. This is the movie that stars Beetlejuice actress Winona Ryder, and is promising that horror maestro Stephen King even made contributions to the coming season. Why would it be doing romantic comedies?

But Netflix and Stranger Things are happy to show you that you are just flat out wrong about them. They are a show that encompasses all the different facets of 1980s pop culture, including those John Hughes like movies where the teenage couple lives somewhat happily ever after, or at least walks away across a football field pumping their fist into the air.

Check out the new trailer:

Ok, well, it's not a *new* trailer exactly, as much as it's a recut trailer for Season 1, pointing out to all of you that if Netflix had wanted to, they could have sold this show in a very different way -- a Hunger Games/Twilight sort of way, where the girl has to try and decide between the two guys who like her, while all she's trying to do is find out what killed her best friend Barb, and kill it herself.

To be fair, there were a lot of fans last year who didn't want Nancy to end back up with Steve when all was said and done. After all, this was a show where the nerds weren't the losers club, they were the heroes. The rich jerk with the hair shouldn't be the one who gets the girl. Will's brother Jonathan Byers, with his weird arty ways and photography skills, should wind up with her, no?

Well, actually, no. That's not how high school works in real life, y'all. In the end, the girl usually goes with the guy with better hair and cooler shoes. It's really kind of a thing.

Also, even though the character was Steve was originally supposed to be the world's biggest '80s douchebro, the Duffer Brothers, upon meeting actor Joe Keeley, realized that just because he was written as insufferable doesn't mean he's actually a bad guy. He's just an immature high schooler, hanging with the stuck-up crowd, and behaving like he thinks he's supposed to.

As Ross Duffer put it:

It's not that he's a flawless character, he's flawed, but Joe was so good we started to fall in love with the idea that he has an arc himself. He's maybe not the perfect guy, but he's maybe in with the wrong crowd. As opposed to him turning Nancy to his side, maybe it's more Nancy turning him to her side. We liked giving him that arc.

The other thing that appealed to us about the idea is it felt like in a movie world she winds up with Jonathan, who is seemingly the nicer kinder gentler guy. But it felt almost more real to us that she would wind up back with Steve, this heartthrob who she's had a crush on for a long time. It's surprising, but it felt more honest.

Will Nancy stay with Steve come this year? Depends... how does the competition style their hair? We'll find out Friday, Oct. 27 when Season 2 arrives on Netflix.