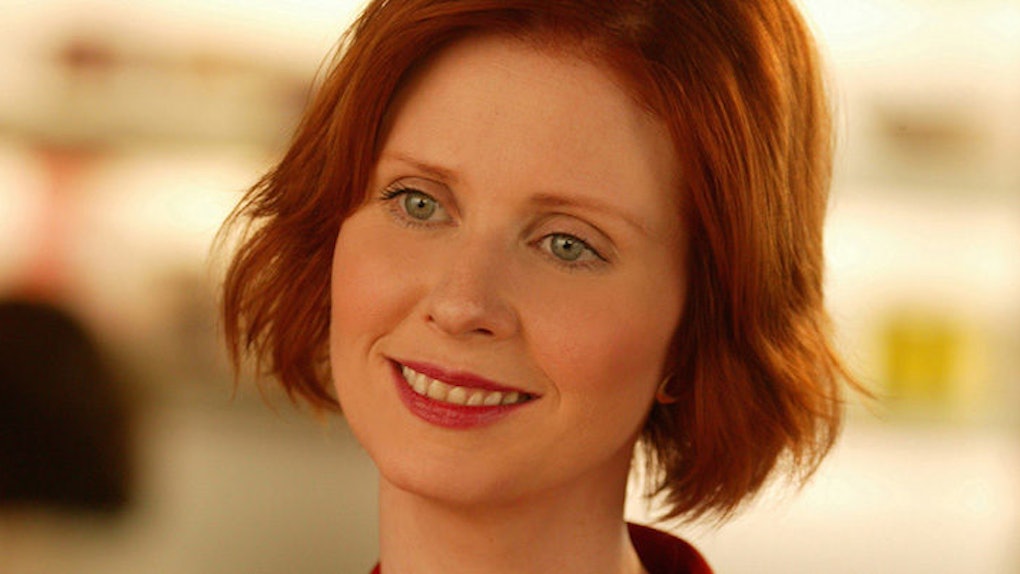 If you clicked on this article, you'll know the feeling I'm about to describe. It's that incomparable sinking sensation that sets in when your friend (inevitably the Charlotte among you) suggests you play a good ol' round of  "Which 'Sex And The City' Character Are You?" aka "How Likely Are You To Have Sex Within The Next 100 Days?"

So, of course, like the dozens of other times you've played, you get dubbed the Miranda of the group. You're not a slave to social restraints, but you do acknowledge them. You like men, but you're not afraid to point out their flaws.

As painful as this character assessment is to accept at an early age, there is, in fact, an upside to being everyone's most dreaded single lady. Here are the five stages of realizing you're a Miranda:

It's definitely just because of the friend group I was with. In any other (less interesting) foursomes, I would have definitely been the Carrie. I mean, I'm quirky, I'm neurotic and I'm averse to wearing a bra.

We would have bonded over our impractical styles and unrealistic relationship expectations. Sure, I'm chronically pessimistic and a bit of a homebody, but who isn't these days? That doesn't mean I'm a Miranda.

That just means I'm simultaneously lazy and disheartened by the state of society. Don't tell me we're not on the same page here. #IHateEveryone and #NetflixandChill exist for a reason.

I also hate cats. So, it's just not a fit. Honestly, I wouldn't care if it were. I'd be the first to admit it. I'd be totally cool with it.

Miranda is actually an interesting character and all, but it's just not the truth. So, just in the interest of full disclosure and everything, I have to vehemently disagree.

What the heck, guys? What is this? Is this musical chairs? Is everyone just going to race to fill the flattering character roles by falsely assigning themselves fake personality traits, while I'm left to fend for myself, aka be Miranda?

Are you kidding me? Do you guys even remember the episode when she wore the blue puffer coat over the denim overalls? I mean, do you remember that episode? Because I do.

She literally wore blue from head to toe. I'm not even kidding you. She wore 100 percent blue.

Carrie was cute and braless, Samantha was showing off her age-inappropriate midriff, Charlotte was in an hourglass figure-accentuating dress and Miranda was literally 100 percent in blue. I actually don't even understand why we're friends right now.

Fine. I'm a "glass half empty" kind of gal. I'm a realist, if you will. I take life as it is, I don't sugarcoat things and I'm a "roll with the punches" kind of lass.

In return, though, can we just acknowledge for a second that sometimes I'm adorable and quippy, and I display an inarguably good taste in footwear? I also have an almost — almost — annoyingly prosaic propensity to overthink everyday topics.

You know what? Fine. I'll be your stupid Miranda. I'll just put a picture of Miranda on my Tinder profile.

I'll start signing my emails, "Miranda." It'll be a joke, but nobody will know, and soon, people will just start calling me "Miranda" because they'll think it's my nickname.

I'll just dye my hair red. I'll only wear men's clothing. I'll get a cat, and I hate cats. Did I mention I hate cats? I feel like that should be a deal-breaker here. I'm so confused about why that's not a deal breaker here.

Whatever, it's cool. At least I have a sick apartment and loads of cash. I also have a commendable, albeit intimidating, degree of respect for myself.

So, let me get this straight. I'm a Harvard-educated lawyer and a single mom who can afford her own epic apartment in NYC and date whomever she wants (even if the choice is questionable), doesn't accept crap from anyone and was a feminist before feminists were "trending?"

Remember that one episode when they're all eating breakfast and incessantly talking about men (this is arguably ever episode), and Miranda storms off after asking angrily, "How does it happen that four smart women have nothing to talk about but boyfriends? It's like seventh grade, but with bank accounts. What about us? What we think, we feel, we know, Christ! Does it always have to be about them?"

Um, swoon. She also owns it when someone's "just not that into" her, confronts catcallers, refuses to apologize for her success and is unabashed about her opinions. Miranda just generally owns the woman she is.

It's true she's weird. But, she's no weirder than any of the other mildly deranged (human) characters in the show. So, if I'm not ready to own up to being compared to an endearingly weird, unapologetic, self-assured, successful woman just because she's not "sexy," "adorable" or quintessentially "feminine," then I've got bigger issues to deal with than a "Sex And The City" character comparison. In conclusion, I'm a Miranda.