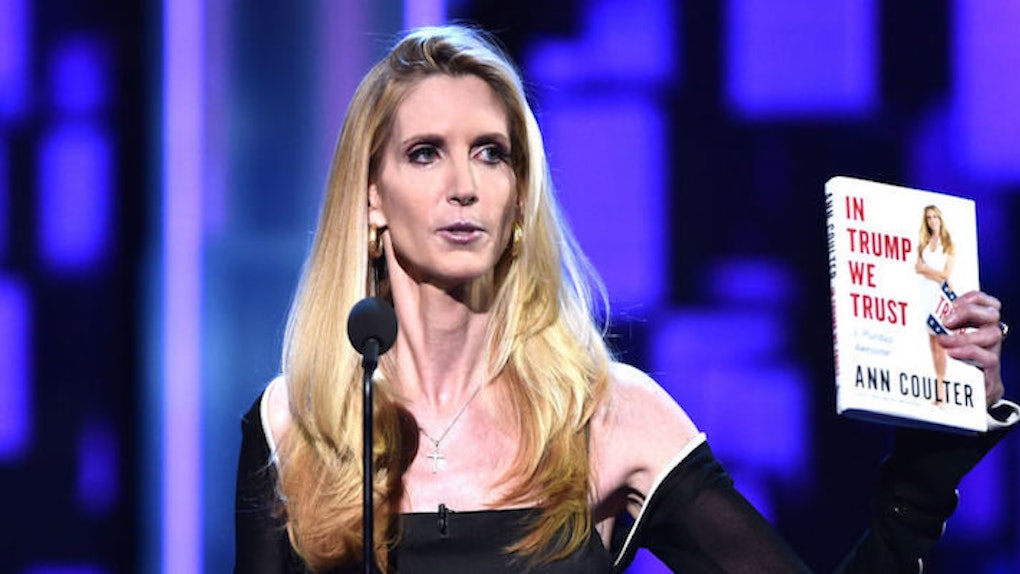 If your reaction is something along the lines of, "Wait... Ann Coulter? The first woman to successfully be stuck in the mentality of a white, male slave owner from the 1800s? What was she doing there?" then you are on the same page as the rest of the nation.

Roasters and roastees typically have the "all in good fun" mentality, but last night's group definitely meant every single word they said to Coulter whole-heartedly.

The night quickly took a turn from poking fun at Rob Lowe's past sex tapes and canceled series to ripping into Coulter's anti-immigration, anti-gay marriage, anti-Semitic, racist and pro-Trump beliefs.

She does not understand humor or joy. Most of what you saw was her own stuff.

He really didn't need to say that for everyone to believe it, as anyone who watched her set could easily figure that out.

While her entire set was just a string of pure garbage words, the highlights of the night came from the roasters mercilessly tearing into her.

"I just realized I'm not the only athlete up here tonight. As you all know, earlier this year Ann Coulter won the Kentucky Derby." -- Peyton Manning

"Why is Ann Coulter here tonight? Because the right-to-lifers wanted everyone to see what an abortion looks like up close." -- Rob Lowe

"As a feminist, I can't support everything that's being said up here tonight. But as someone who hates Ann Coulter, I'm delighted." -- Jewel

"You know, last year we had Martha Stewart who sells sheets. Now we have Ann Coulter who cuts eye holes in them!" -- Pete Davidson, in addition to another epic line I know my parents wouldn't want me writing out. But, still. Pete, I love you.

“Ann Coulter is one of the most repugnant, hateful bitches alive — but it's not too late to change, Ann. You could kill yourself.” — Jimmy Carr

"The only person you will ever make happy is the Mexican who digs your grave." -- Nikki Glaser

"The only person you will ever make happy is the Mexican that digs your grave" #LoweRoast pic.twitter.com/dlUPrSvsQl — Nate (@BarstoolNate) September 6, 2016

So, yeah, she got torn to shreds, but if you watch her set, it seems well-deserved -- at least in the spirit of a Comedy Central Roast.

For more from Ann Coulter, buy her book, which is legitimately titled "In Trump We Trust: E Pluribus Awesome!," or, I don't know, literally do anything else.