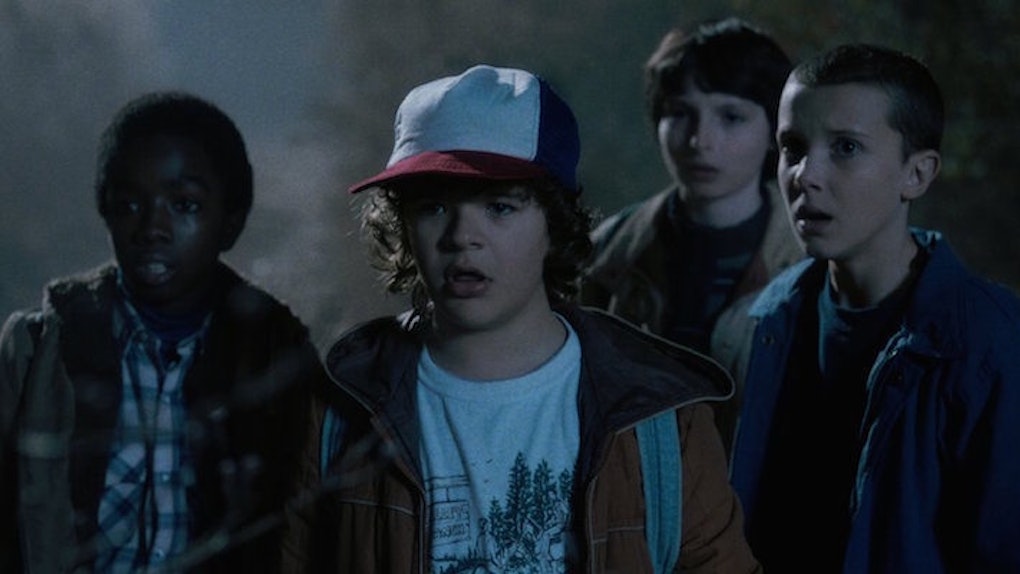 The first season of "Stranger Things" is up on Netflix (I know, I know, I'm a bit late to the party), and it's made up of several wonderful characters.

There's the exceptional Chief Hopper, the teenagers who set out to fight a monster and the young girl who willingly re-enters a scary place in order to help her new friends.

However, I'm pretty certain I, a 20-something-year-old who watches too much TV, will never actually be confronted by a “faceless man” from “the upside down” world or possess superpowers. So while these characters are incredibly impressive on the silver screen, they're actually not helpful role models for the average Joe.

One of my favorite things about "Stranger Things" is we don't just see the undoubtedly brave characters like Hopper, Nancy, Jonathan and Eleven. We also see the secretly inspirational characters who show us how to live everyday life like a champion.

Here are the "Stranger Things" heroes people like you and I can look up to.

To most viewers, Barb probably seems like an uncool, uninteresting and unimportant character. She has hardly any screen time, only one person seems to really notice when she goes missing and then she dies.

But when I actually took a moment to think about her, I realized she can actually teach us a thing or two about how to be a good friend. She notices when Nancy isn't being herself and bravely confronts her about it. She didn't want to attend Steve's party, but she did it anyway because she clearly wanted to be there for her friend.

And when Nancy rudely tells her to “just go home,” she waits for her alone in the backyard, probably because she wants to make sure Nancy gets home OK.

Dustin isn't just super comical and endearing; this lovable cutie also models how to be an awesome friend.

Forget “Toothless.” I have now nicknamed him "The Peacemaker" because he is one. When Mike and Lucas fight, Dustin tries to stop them. Afterwards, he bravely tells Mike he was in the wrong, saying, “You pushed first.”

Being rebuked sucks at first, but in the long run, it helps you become a better person. So, go Dustin! He then encourages Mike to seek forgiveness from his best friend, once again demonstrating these boys clearly value friendship.

PS. To all the Dustins in every friendship group, we are so thankful for you.

While Mike's dad sleeps on his recliner, Mike's mom is busy feeding her family homemade blueberry pancakes for breakfast.

She is doing everything in her power to keep her children safe and assure them they can talk to her about anything. She knows when to give her children personal space, but she's also willing to pry when she knows something's up.

Karen is the primary comforter of the Wheelers and clearly cares deeply about the well-being of her family. When she heard Mike was in danger, she considered going out and investigating, while her husband was happy to sit back and let someone else do the work. Karen models how to be the ultimate householder -- every home needs one.

We didn't have much time to get to know Benny. But with his 15 minutes of fame, this restaurant owner earned the good Samaritan title.

Instead of forcing a random grubby girl (Eleven) to leave his restaurant after sneaking in and stealing his food, he took responsibility and chose to care for her. He cooked her a meal, tried to understand her situation and called social services to come and collect her.

He reminds us strangers have their own hardships, so we should care for them.

Yep, you read that right: Steve. I know, I know, I saved the worst for last, but bear with me!

Steve was a total jerk in the early days. He was shamelessly trying to get into Nancy's pants, and he completely destroyed Jonathan's camera. He couldn't care less when Barb went missing.

But later on, Steve is a little bit less selfish. He helped the cinema owner remove graffiti, apologized to Nancy (before helping her slay a mysterious monster) and replaced Jonathan's camera. He shows us if you act like a cow, which we all do at times, it's possible to turn around and change your ways.

So, there you have it: These are the everyday heroes of "Stranger Things."

I will never battle beasts like Lucas, Nancy and Jonathan did or kill “the bad guys” with my eyes like Eleven did. But I will always have the opportunity to be an epic friend like Barb, a householder like Karen and a good Samaritan like Benny.