Remember how cool and shocking it was when Nicki Minaj called out Miley Cyrus during the VMAs last night?

Well, it was probably fake, since nothing is sacred in this life.

Last month, Taylor Swift and Nicki Minaj got into an incredibly-intense-yet-awkwardly-short Twitter fight about white privilege and VMA nominations. Remember that? Of course, you do. We all do.

Thanks to some gentle prodding by a reporter for The New York Times, Miley Cyrus took a very anti-Minaj position on the feud over a month later.

When asked about how she felt Minaj conducted herself during the war of 140 words, Cyrus told The New York Times,

What I read sounded very Nicki Minaj, which, if you know Nicki Minaj is not too kind. It's not very polite. I think there's a way you speak to people with openness and love. You don't have to start this pop star against pop star war.

Minaj was uncharacteristically silent on the whole interview after it ran, leaving most of us to think the pop icon just got tired of the fight and wanted to move on.

Then, this gem of a moment happened last night while Minaj was accepting the Moonman for Best Hip-Hop Video, and we all, for a moment, thought it was insane to assume Miley would get away completely unscathed.

@nickiminaj does shade better than most. Here she takes on @mileycyrus#VMAshttp://t.co/0Wh4cOvCES — NowThis (@nowthisnews) August 31, 2015

Let's all take a second to acknowledge how Miley apologized while wearing a giant candy wrapper as a bra and an accountant's visor.

Now, look at that cold blast of shade from Nicki one more time.

Someone even captured Miley's immediate response to Minaj's words. 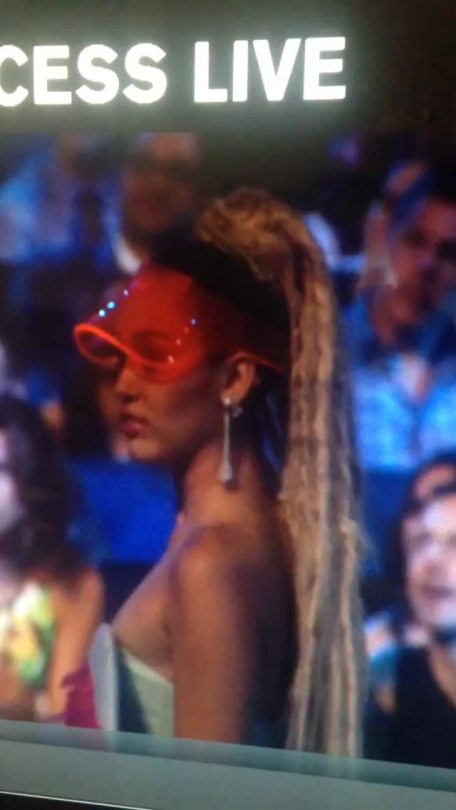 Man, that was good. Actually, on second thought, it was probably a little too good.

Fans spent this post-VMA morning on Twitter blasting the VMAs, Cyrus and Minaj for what fans claim to be a completely fake WWE-esque stunt to trick viewers into thinking the two pop culture titans were actually throwing down.

I know that beef with @NICKIMINAJ and @MileyCyrus was so fake as hell #VMAs2015 nick trying to act all hard and shit smh — P Lizzy (@mzbayusa) August 31, 2015

We all know that was fake at the #VMAs. @MileyCyrus sigh at the end gave it away. Still, it was hot seeing that side of @NICKIMINAJ though. — Chris Wellz (@RealChrisWellz) August 31, 2015

Even MTV News didn't know what to think.

Was MTV involved, and now, it's covering its tracks? How far does the rabbit hole go?

Congratu-f*cking-lations, Miley, Nicki and whoever else was in on this. You tricked us all. Is Kanye even running for president?!?!