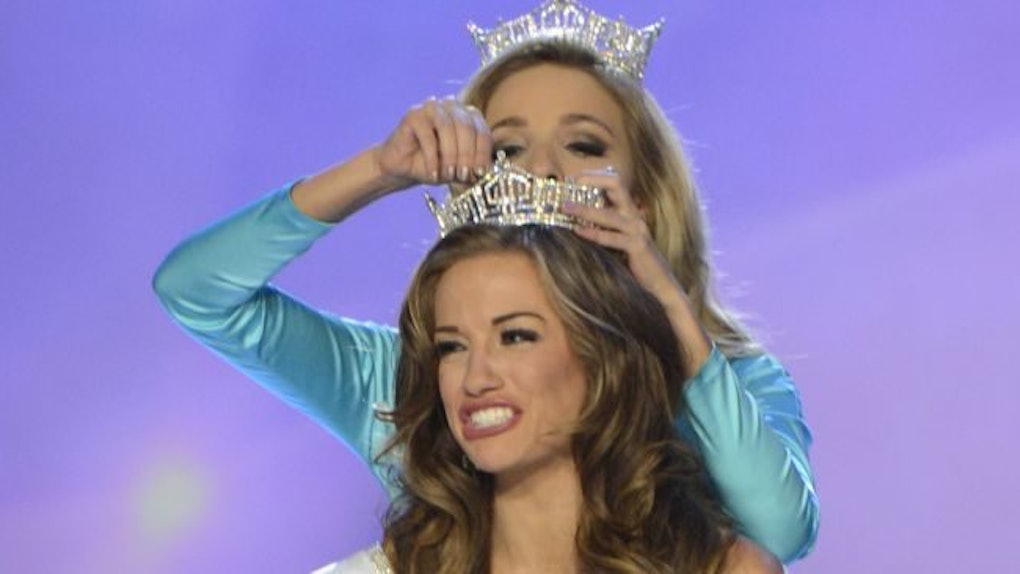 What's The Difference Between Miss America And Miss USA? There's A Few

The Miss America pageant is coming this Sunday, with all the pomp, circumstance, dresses, bathing suits and so on you might expect. But if you're wondering why this show is on ABC and not NBC, or muttering to yourself, "Wasn't Trump involved with that?" let us clarify. There are two pageants that happen every year, and though from the outside they might seems the same, they're not. Let us break down the difference between Miss America and Miss USA as both industries and television programs.

Pageants, in and of themselves, are a curious culture to the outside observer. Exactly why, in 2017, when women are still fighting for equality, little girls are still willing to put Vaseline on their teeth and smile, smile, smile, in swimsuits for the approval of men may seem extraordinarily retro. But when it comes to the way to two different pageants conduct themselves, there are some things that make the competition make sense.

The Miss America pageant is the far older of the two, having started back in 1921. The time of year isn't an accident -- the premise of the show was to draw in tourist business to the boardwalks of Atlantic City after Labor Day, but before it really got cold on the beach.

Miss USA, on the other hand, didn't start until 1952, and it was basically a breakaway pageant from the original. Ironically Miss USA was born because the winner in 1951, Yolande Betbeze, refused to pose in a swimsuit. The swimsuit sponsor got so mad, they pulled their money and went and formed their own pageant.

Now you know why Miss USA is far more into the Swimsuit portion of the show to judge their girls, than say, the Talent portion, which Miss America puts a lot of stock into. (Despite the fact that recently they had a winner who's "talent" was playing the solo cup.)

The Miss America pageant also, over the years, has changed with the times. (Well, kinda.) When it first became an issue that women were being judged on looks, only to win a mere trophy, they changed the way their business worked so that they are now actually not a beauty pageant when it comes to the business they're in. They're actually in the scholarship awarding business. Miss America 2017 won $90 towards her education last year. This year, there are over $303k that will be awarded.

It's also part of the Miss America mission statement: "the largest provider of scholarship assistance to young women in the United States."

Miss USA... well remember how they're more into the whole "swimsuit" deal, but not talent? They're not into education either. I suppose the winner could take her earnings -- which are pretty extensive -- and use them for college if she wanted to. But it's not mandatory. Instead, they believe that the winner and the competition's mission is "to provide the tools which help women to be their personal best." Ok then.

As for the deal with Donald Trump, he never owned the Miss America pageant. In fact, up until 2015, it was run by Sharon Pearce. It has also been aired on ABC for decades, with only the years between 2006-2001 on ABC subsidiaries due to low ratings.

Miss USA on the other hand, was bought out by Donald Trump in 1996, and he retained ownership until 2015, when his racist remarks caused NBC to drop the show and shareholders to force him to sell. When you hear stories of how Donald Trump treated it like it was his personal playground, that's the Miss USA pageant they're talking about, not the Miss America one.

Since NBC dropped it, and Trump left, Miss USA has been picked up by FOX. It airs in the spring, with Miss USA 2017 having been crowned back in may of this year.