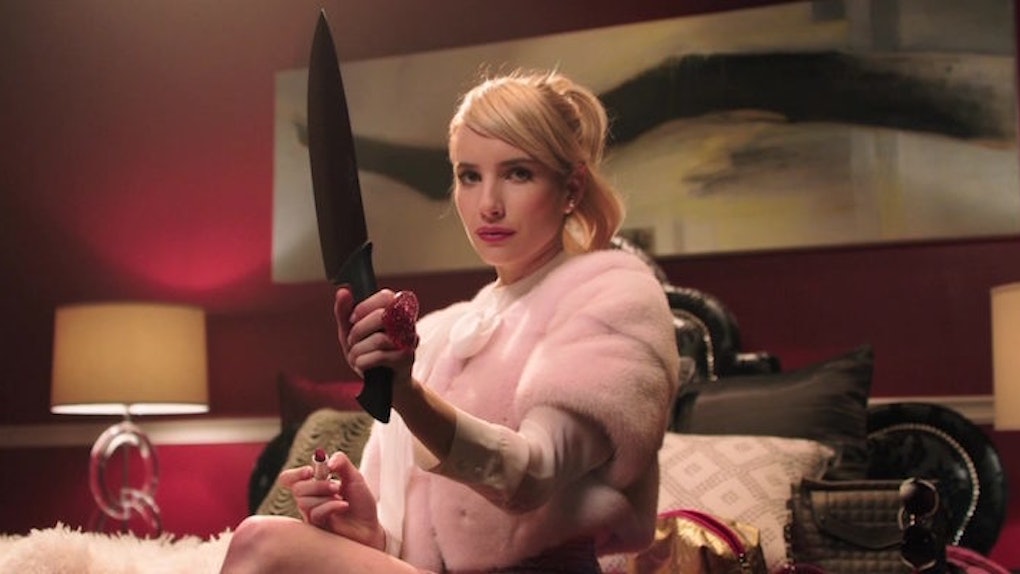 Scream For 'Scream Queens': 4 Reasons We All Love The New FOX Series

People everywhere can't get enough of "Scream Queens." The show and its themes are extremely controversial, but in an interesting and intelligent way.

Why do we love it so much? I have a few ideas:

1. For starters, the actors are hot.

The "Scream Queens" cast is comprised of an incredible lineup of Hollywood hotties, including the original "Scream Queen," Jamie Lee Curtis, who looks absolutely stunning in her role as Dean Munsch. Emma Roberts, "American Horror Story" vet, takes the lead role of the show, Chanel.

Reminiscent of her role in "American Horror Story: Coven," Chanel is wildly popular, sex-crazed and tormented.

As for the leading hunks, we've seen hotties like Nick Jonas, Diego Boneta and Oliver Hudson well-groomed so far, each playing a hilariously creepy and awkward kind of gentleman.

2. This primetime show's got (my take on) feminism covered.

Chanel #1 (Emma Roberts) is the HBIC of Kappa Kappa Tau. Her fashion sense, attitude toward others and self-deprecating behavior make her an entertaining trainwreck we love to hate.

Some of her ideals push feminism back several decades, like wanting her boyfriend, Chad, to "sleep with a lesser number of people."

On the outside, Chanel #1 might seem like a bad representation of women (and women in the Greek system), but she's completely confident and comfortable in herself.

She's a strong woman at the head of a prominent house in the Greek society who knows what the hell she wants.

A number of reviews have conceded the show addresses a lot of the issues society has with the feminist movement and what it means to be perceived as a strong woman.

Dean Munsch (Jamie Lee Curtis) is another feminist role model in the series. She continues to be the driving force keeping the KKT sorority together, explaining to them sisterhood is a precious gift. I feel like her main theme is, "It's always best to choose hoes over bros."

All in all, the women of the KKT sorority are strong and independent. Sure, they say illogical and degrading things to themselves and each other, but they make the choice to say those things.

All of the women in KKT — whether they're choosing to have threesomes or fighting to keep KKT together and alive — are making bold choices on their own terms.

The women of KKT are empowered in their educational lives, Greek lives and their sex lives. And we love them for it.

Chanel #1 is to Regina George as Grace Gardner (Skyler Samuels) is to Cady Herring.

Chanel #1 is the bitchiest bitch on campus, greeting her sisters with a "good evening, idiot hookers" in the pilot episode. While truly evil, her consistent degradation of everyone on campus is kind of inspiring.

There's something mesmerizing about someone so powerful we can't help but enjoy. You know her cohorts are also enjoying it, as each of them is vying for the chance to become "the next Chanel."

As bitchy as Chanel #1 can be, she does have her redeeming qualities.

Like any good show on television, "Scream Queens" keeps us coming back because we're all dying to know who the Red Devil is.

The actors have been told to portray each of their roles as if they were the murderer, leaving everyone thoroughly confused at the end of each episode.

At this point, everyone could be the murderous school mascot, slaying Kappas and anyone close to them.

Trust me; if you're not watching this show, you're missing out. For these and many other reasons, we will continue to watch and rave about "Scream Queens."

Tune into FOX on Tuesdays at 8pm ET, or continue living under a rock. It's your choice.