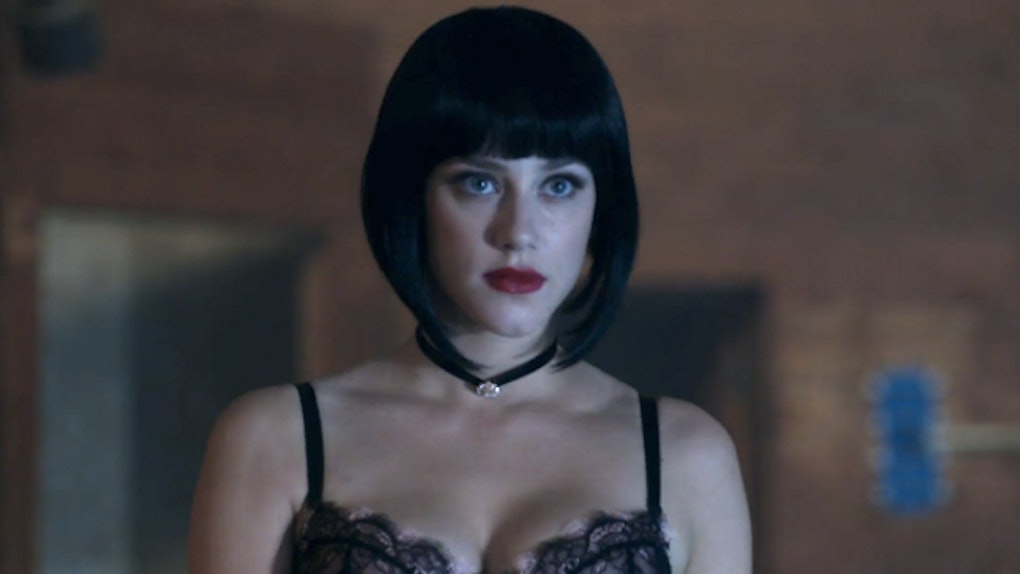 We're less than two months away from new episodes of Riverdale — Season 2 premieres on October 11 — and star Lili Reinhart is spilling some details about what the new season is going to be about. Apparently, we're going to see a lot more of Betty Cooper's dark side. Elite Daily caught up with Reinhart at the St. Ives Mixing Bar in New York to get the scoop on some Riverdale Season 2 spoilers, including the focus of the upcoming season.

Now that the mystery of Jason Blossom's death has been solved, Reinhart revealed Season 2 will take on a new major mystery, and Betty will be at the center of it. In particular, it sounds like we're going to be learning a lot more about Dark Betty, the savagely vengeful Betty Cooper alter-ego we saw arise early in the first season. In a standout scene, Betty dons a black wig and tortures fellow student Chuck to an unnerving degree when she finds out he's been slut-shaming girls at the school. Though we don't get any more wigs or torture scenes from Betty after that, we do see a few other moments when Betty has to fight back her dark urges.

According to Reinhart, we'll be learning a lot more about Dark Betty in Season 2. In fact, it sounds like this mysterious darkness inside her will be one of the most central elements of the new run of episodes, but don't expect to see her put on that black wig again. Reinhart clarified the exploration of Betty's darkness will be more internal in the new season, rather than just showing her overtly transforming into Dark Betty physically.

The mystery of Season 2 revolves a lot around Betty... Season 2 focuses a lot on Dark Betty. I think the way it was portrayed in Season 1 was like “Whoa, she's wearing a dark wig,” like an alter-ego, where it was a physically dark Betty. But in Season 2 it's a lot more... internally her darkness comes out, and it's a tortured soul Betty that you get to see. So it's a lot more of an internal struggle, rather than just a moment of putting on a wig.

The biggest mystery about Dark Betty (which it sounds like Season 2 will address) is where all of this unexpected ruthlessness comes from. Reinhart hinted that the intense anxieties of trying to be the "perfect girl" are a major factor in creating Dark Betty.

We're touching on a lot of her internal darkness, and I want to show the dark side of this perfect girl. And just kind of dig into her real anxious personality and where that anxiety comes from and the pressures of being perfect, just get to the root of that and see it come to the surface more.

So strap in for an even darker Betty Cooper, Riverdale fans!