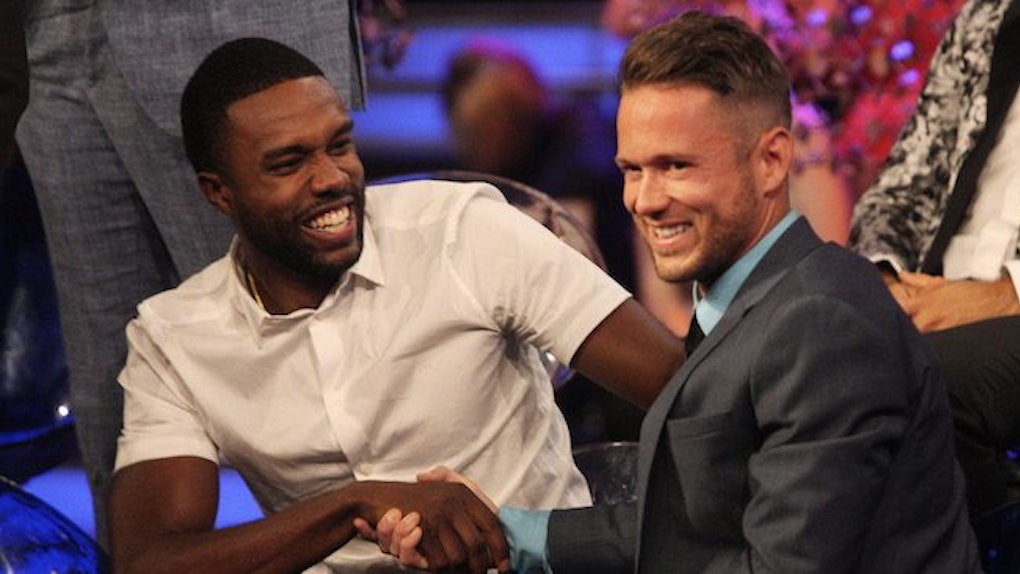 Lee Addressed Racist Tweets On ‘Bachelorette: Men Tell All’ & It Got Bad Fast

If you're a Bachelorette fan who thought you would never have to see Lee Garrett's smarmy face again, you clearly forgot all about Men Tell All. But here's the good news: Lee addressed his racist tweets on Bachelorette: Men Tell All. Surprisingly enough, it was actually kind of productive.

In probably the most exciting portion of the special (which isn't saying that much), the ABC producers put up Lee's old controversial tweets on the big screen for all to see. These tweets — which say things like "I don't hate Muslims, I do hate Islam," "When was the last time you saw a pretty feminist?,” and "What's the difference between the NAACP and the KKK?" — were exposed by The Huffington Post back in May.

When confronted with the racist, sexist, islamophobic, and all around terrible things that he once put on the internet for all to see, Lee apologized. Sort of. He promised he's trying to educate himself and be a better person, but wouldn't own up to just how offensive the tweets were — not yet.

Josiah jumped down in the hot seat with Lee, and that's when things really got real. Josiah did not beat around the bush — he straight up asked Lee why he would come on the show if he didn't like black people.

"Why did you come on the show when The Bachelorette was an African American woman, if on the other hand you're tweeting about black people and groups of black people who fought and died so I could be on the stage next to you?"

"If I hurt anyone with a bad joke or anything, I apologize," said Lee, but it still didn't seem like he understood the weight of what he did. So the guys pushed him even more.

Anthony stood up and hit him with a hard hitting question: "I think you're not acknowledging the invisible racism in your mind. ... Are your actions motivated by racists thoughts that are implicitly embedded in you?"

"I am grateful that I have people in my life now that make me not like I was when I made a racist comment. I'm sorry for saying things when I was not educated and ignorant in those subjects," Lee responded.

Will pushed him to actually acknowledge that "not educated" means "racist" and Lee did.

"That tweet was racist and I denounce it," Lee finally, finally said.

Kenny then gave Lee a peace offering, saying he was willing to move forward if Lee was. Lee accepted, and the two guys hugged it out.

Earlier this summer, fans criticized ABC for bringing Lee on The Bachelorette in the first place, accusing the network of purposefully bringing on someone with a history of racism in the first season with a black Bachelorette. However, Chris Harrison maintains that neither he nor the studio knew anything about the tweets when they recruited Lee.

Of course, the other big Lee drama is fight with Kenny, which they basically hashed out one more time on Men Tell All. To his credit, Kenny didn't call Lee a racist — he just thinks Lee is a giant a-hole. But once Lee owned up to his racist tweets and declared that he wants to educate himself on these issues, Kenny stood up and offered to help Lee with that education. Many other contestants did the same.

Hopefully, after The Bachelorette: Men Tell All, we'll never have to see or hear from Lee again. But actually, this time.