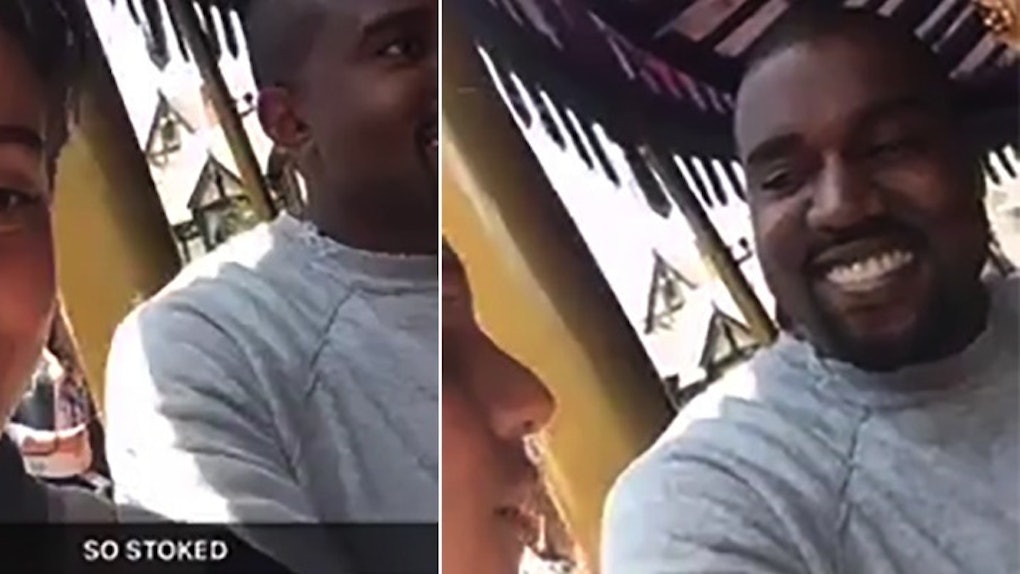 This Kid Interviewed Kanye West Like A Boss, And Caught It All On Snapchat

How exactly would you react if you had the rare chance to meet Kanye West?

From music to fashion and everything in between, the guy is one of the most influential celebrities in the world right now. That explains why this one kid was super stoked when he ran into Mr. West himself at Disneyland.

I mean, what are the odds of that happening?! I'd be pretty damn stoked, too.

Kanye and Kim were enjoying a day at Disneyland for North West's third birthday. That's when some random kid spotted the couple and immediately whipped his phone out to post the whole interaction on Snapchat (of course).

Stoked Snapchat kid took advantage of the whole thing by immediately asking interview questions no one asked for. The results? Internet gold. Come on, the kid even made Kanye smile. And that is not an easy feat to accomplish.

I guess 'Ye was just trying to avoid falling asleep for the second time at his own daughter's birthday party.

It turns out one particular Kanye fan was in attendance, too. Enter stoked Snapchat kid.

Instead of just saying "hey, Kanye" and simply asking for an autograph, the kid decided to conduct a full-on Snapchat interview:

After realizing who he was in the presence of, stoked Snapchat kid begins the spontaneous interview with "Alright, alright, alright... so, how did you write [the song] I Love Kanye?" And the rest is history -- Internet history.

Let's just say this might be the best 9 seconds of this kid's life.

I guess Kanye only bites if you're the actual paparazzi.

Citations: This Kid's Excitement Over Meeting Kanye Will Put A Smile On Your Face (BuzzFeed)