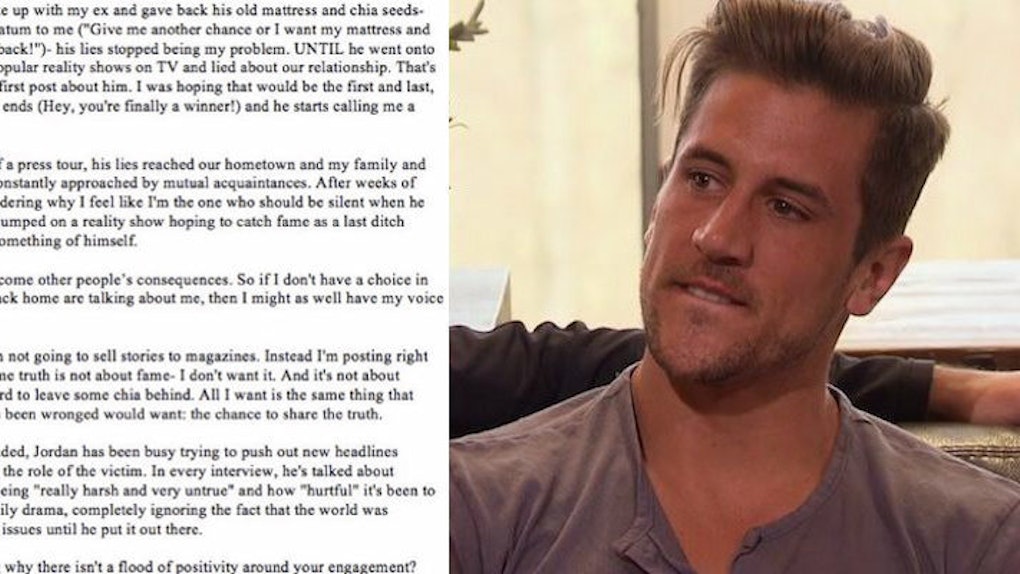 Ever since Jordan Rodgers was cast as a contestant on "The Bachelorette," a lot of controversy has surrounded his name.

Rumors spread that the former football quarterback wasn't there "for the right reasons" and only wanted to date JoJo Fletcher to gain fame.

But that wasn't the end of it. After Rodgers won this season of "The Bachelorette," his ex-girlfriend, Brittany Farrar, came forward with allegations that he cheated on her throughout their relationship.

According to Farrar, the two dated for three and a half years and he cheated on her several times.

Since the season finale aired, Rodgers and Fletcher enjoyed a romantic getaway and are now in Dallas, Texas, moving in together.

Rodgers has denied basically every allegation (that he's doing it for the fame, that he cheated on his ex) and has reassured Fletcher many times he's faithful, loyal and in this for her.

Well, if I was Rodgers, I'd be shitting my pants right now. Farrar went to Instagram on Thursday to show proof -- ACTUAL EVIDENCE -- that her ex cheated on her.

She first showed the receipt from a rose bouquet Rodgers bought for one of his "Pitch Perfect 2" co-stars while he was filming on set for a minor role.

Rodgers played one of the Green Bay Packers and can be seen in the very background of a shot. HIS BIG BREAK INTO ACTING! HE'S A STAR!

According to Farrar, Rodgers added this message along with the flowers:

Happy Birthday to my Favorite Bella. Miss you. Can't Wait to To See That Beautiful Smile Again. From, Your Favorite Football Player Wanna Be Actor.

If you're familiar with "Pitch Perfect," you know The Barden Bellas are the female a cappella group in the movie. If I were to guess, I'd say Rodgers was sending flowers to a female co-star who played one of the Bellas.

Farrar explains the flowers were "for the girl he cheated on me with in Louisiana."

Since then, the post has been deleted, but only after fans took screenshots.

On top of that, Farrar added a lengthy message on Instagram accusing Rodgers of lying about their relationship.

In the note, she explains her ex is doing this all for the fame and is "desperate to stay in the spotlight." At the end of the day, it looks like Farrar just wants the truth to come out.

It's unclear what this means for Fletcher and Rodgers, but from the looks of it, this guy won't be around for long.