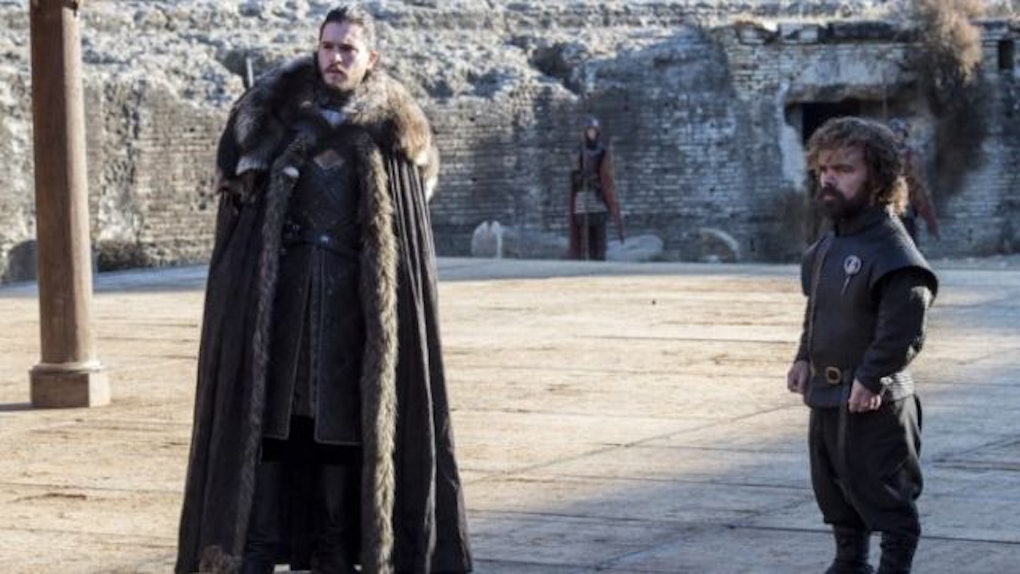 This post contains spoilers from the Game Of Thrones Season 7 finale. Game of Thrones might have been a shortened season this year, with only seven episodes instead of 10. But ever since Jon Snow walked into the Great Hall at Dragonstone, he and Dany falling in love has been the obvious next step. And now, in the dead of night, on a boat North taking them toward Winterfell, it's here: Jon and Daenerys have sex on Game Of Thrones.

Was it written in the stars? It certainly wasn't written in the original outline of the series that became A Song of Ice and Fire. Famously, George R.R. Martin's first draft outline had Jon Snow marry his cousin Arya instead. But since the tale grew so long in the telling that the TV show got there first, it's been obvious all year this was what we were heading toward. Especially after last week's scene (also on a boat funnily enough) as Jon held Dany's hand and told her how sorry he was her beloved dragon Viserion was dead.

El Boatsex, as they've been calling it on Reddit. Hot Targ on Targ action. The Dragon and the Wolf... except they're actually both dragons. Sorry Daario. This is why you had to stay behind in Meereen.

The Targaryen habit of intermarriage is apparently one that comes from the laws of attraction even when they don't know they're related. As far as I've been concerned. Dany and Jon have always been endgame, though how the books were planning (are planning?) to get around to this plot point is still a mystery.

With Sam and Bran together in Winterfell to back each other up on claims of Jon Snow's parentage when he gets there, the only question is how well does Dany take the news he's the heir and not her? Or will Jon Snow tell her she can have the throne anyway?

And finally, there's Tyrion looking sad. We knew he loved her, even if the show has underplayed it so much half the audience hasn't noticed. But perhaps some joyful news will come out of this. Obviously, Jon is OK with having sex without marriage, because Dany told him she's barren. If this turns out to be just more mush from the witch, and Dany winds up with child, Tyrion can stop worrying about the proper line of succession.

Of course, to find out if any of that is happening, we'll have to wait for Season 8....