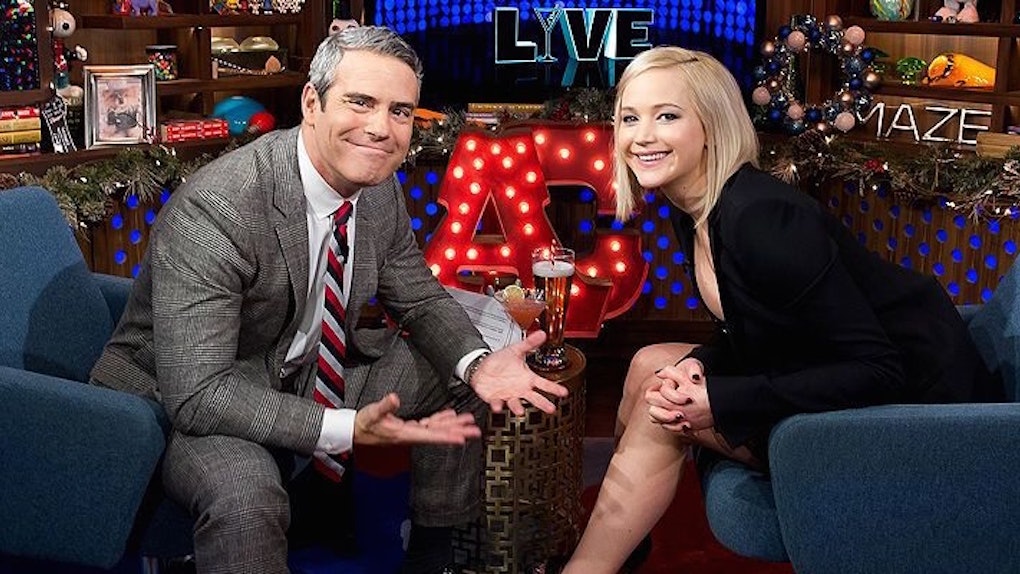 Jennifer Lawrence having a firm decision on whether or not she'd hook up with Justin Bieber proves, once again, she is just like all of us normal people.

Man or woman, at some point in your life, you've thought to yourself a question every human on this planet has seriously asked him or herself: If the opportunity ever came up, would you bump uglies with Justin Bieber?

STOP DENYING IT! You've thought about how you'd react to potentially sealing the deal with J Biebs, and you're lying to yourself and everyone around you if you claim otherwise.

We've all thought up crazy scenarios in our heads -- mine involves a broken tour bus next to an apple orchard I would hypothetically own -- that would lead to this, and we've all tried to navigate what we'd do if that scenario ended with a sweet n' soft no-strings-attached hookup sesh with Bieber.

Jennifer Lawrence has clearly thought of this before, and she gave her firm answer on “Watch What Happens: Live” with America's moderator, Andy Cohen.

Based on the way she responded to the question, I don't think she's ever been more sure of anything in her entire life.

While she may not be giving the goods over to Justin, there is one small-time Hollywood star she would, and has, locked lips with. You've probably never heard of him, though.

His name is Liam Hemsworth, and like, he's not even that hunky looking at all or whatever.

So like, it's not an Earth-shattering deal, OK?!?! OK! Back off! I'm not sweating just thinking of his name. YOU ARE.

Citations: Watch Jennifer Lawrence Respond Perfectly When Asked If She Would Hook Up With Justin Bieber (Cosmopolitan)