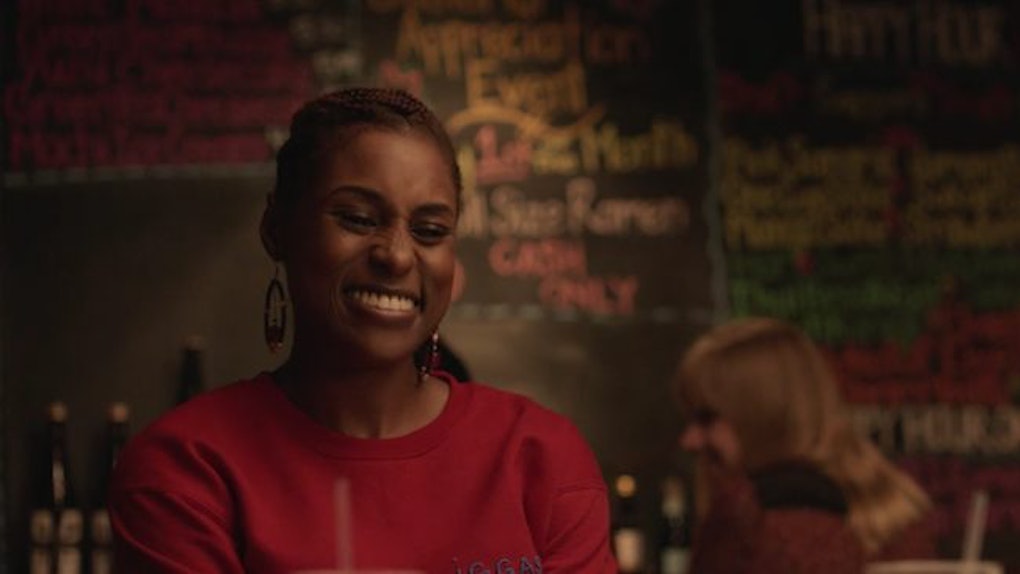 Are Issa & Lawrence Back Together In 'Insecure' Season 2? Sort Of

Insecure's Season 2 has certainly kicked off with a bang and answered fans' burning question about what the heck happens with Issa and Lawrence... kind of.

And, yep, spoilers are ahead, people!

Yes, they do get back together, but no, it's not at all like how you think. Heck, it wasn't even how Issa thought it would be.

The episode begins with Issa going on multiple dates that she met on a variety of dating websites, but all she can think about while she's entertaining any of them is whether or not Lawrence will take her back now that it's out that she cheated on him with fine ass Daniel.

Issa even imagines a whole "I'll take you back" speech from Lawrence while grabbing food with another guy, who makes futile attempts to get to know her. It was just all bad.

In short, Issa was nowhere near ready to date anyone just yet, even though the show returns when it has been several months since Lawrence moved out of the apartment they shared.

Lawrence has been avoiding her like jury duty, and when he finally gets a real jury summons, Issa uses that as a way to bait him to see her and talk in person. She even organizes an entire party to take place as he drops by to pick up his documents, which turned into a tanked plan since Lawrence never showed up.

The first half of the episode is Issa telling her best friend, Molly, that she's over Lawrence; meanwhile, she is desperate to see him. Her feelings are understandable since they broke up right when she truly wanted to be with him and never got any closure since Lawrence left so abruptly. She's also still feeling hella guilty, as she should.

What Issa should be attempting to do is heal from the breakup instead of forcing Lawrence into talking with her about their relationship. His actions, so far, say he doesn't want to get back together.

Issa's only saving grace is that as distant as Lawrence has been, it's clear he actually hasn't totally moved on from their relationship, either.

It all comes tumbling out when he finally arrives to Issa's apartment and before you can blink, they are on the couch having sex.

Their post-breakup sex exposes the grey area a lot of ex-couples play in.

I wanted to condemn and clap for them both at the same time. It wasn't what I wanted for those two, but it wasn't something I didn't want either.

After the deed was done, though, both Issa and Lawrence looked exceptionally stressed out — just before he left out and left their relationship in the same broken up status it was in when he first knocked on the door.

Issa and Lawrence shouldn't have had sex when they were both aware that Issa still wants a relationship and neither of them have had a conversation about whether or not they should move forward.

Still, they aren't the first or the last couple to replace necessary communication with sex and to not fully deal with their open ends. I can say I've so been there.

The greatest lesson to grab from Issa and Lawrence's faux reconnection is honestly that crap happens and we don't always handle our healing processes like we should, but we shouldn't beat ourselves up over it.

The breakup season is full of the "I'm over it/I'm not over it" mental flip.

Post-breakup sex can happen when unresolved feelings and physical attraction remain. While you should avoid that, it's not the end of the world if you slip up and you don't.

And yes, we can do some seriously stupid things like organize a fake party so we can look fake-happy to our ex, in efforts to win them back and be real-happy again.

We're all just learning and growing. Eventually though, I do want Issa and Lawrence to wrap up the flip-flop once and for all.

Be together or don't be together, but grey areas can be really, really hurtful when we stay in them because we're afraid that bringing clarity to a situation will hurt us more than help.