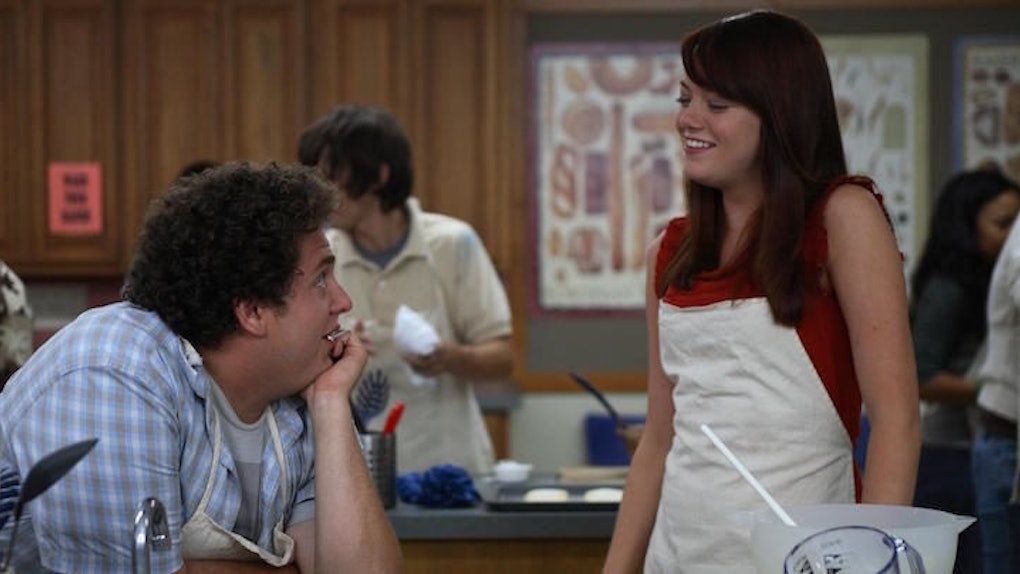 That means, from the age of 12, I’ve spent approximately every single minute of my life wondering how I can “get the girl.”

I’m also an average dude, which means I have absolutely no idea what I’m doing.

Nearly two decades after the onset of puberty, and I’m still baffled by romance.

Luckily for us guys, we can always turn to the movies for advice on how to win over the women of our dreams.

Popular films are full of similarly desperate men for us to relate to, be they teenage virgins on a quest to get laid or old-school romantics aiming for a happily ever after. Their paths to success can guide our own.

The problem is, Hollywood and reality rarely overlap. Just as “Star Wars” isn’t an accurate depiction of space travel, a rom-com isn’t an instruction manual for dating.

Here’s the deeper issue, though: That lack of realism is fine in a film like “Star Wars,” since the only people actually traveling to space, astronauts, know a lot more about the experience than George Lucas ever will. The fantasy harms no one.

That’s not the case when it comes to films about guys trying to score a pretty girlfriend.

We grow up watching these movies, and if we’re not careful, we can start to think the characters in them are models of appropriate romantic behavior.

As the examples below prove, this is rarely the case. Here are seven ways Hollywood has taught us to chase women.

This quintessential teen classic doesn’t lie to us about the essence of adolescent relationships. The boys in the movie are motivated less by love and more by the unstoppable onslaught of raging hormones.

In other words, it’s a shockingly accurate depiction of high school.

But it’s also pretty damn terrifying when you take more than a few seconds to think about it. Particularly the scene in which Nadia, the beautiful foreign exchange student, undresses and masturbates while the guys watch it all via webcam.

In the real world, hiding a camera to spy on your classmate in any context is a pretty serious offense.

In a sexual context, it should probably get your name added to a list.

In “American Pie,” it’s played for laughs, and the only one who suffers any consequences is poor Nadia, who is sent back to her home country when the webcam video goes viral across the school and her exchange family finds out.

And while we’re on that subject...

2. Watch her undress without her knowing: "The Girl Next Door"

“The Girl Next Door” is about a shy adolescent who learns to overcome his personal limitations and lands a relationship with his ex-porn star neighbor, because no teen movie can allow a guy to find fulfillment without also rewarding him with an unrealistically attractive girlfriend.

Except, in this case, the characters meet because he watches her undress through her open window, and she catches him in the act.

That’s right, guys: If you think a girl is hot, there’s nothing wrong with going full Peeping Tom. She’ll probably find it cute.

Hey, it also worked out for George McFly in “Back to the Future.”

3. Get her really drunk first: "Superbad"

“You know when you hear girls say, ‘Oh, man, I was so sh*t-faced last night, I shouldn’t have f*cked that guy?’ We could be that mistake!”

That’s the character of Seth trying to convince his friend Evan to join him in buying alcohol, bringing it to a party, getting their crushes drunk and having sex with them.

It’s a line that sums up the film’s premise so well that it showed up in most of the trailers and TV spots. And plenty of us were happy to overlook the fact that this is a terrifying premise for a comedy.

Again, look at that word “mistake.” Seth assumes the good-looking girls don’t actually want to have sex with him and Evan, but if he gets them drunk enough, they might.

Sooooo... it’s basically a movie about two guys on a goofy quest to commit date rape?

Granted, their plan backfires in the short run, and they don’t get laid at the party, but the next morning, they bump into those very same girls at the mall. It’s implied they’re all about to couple up.

It’s supposed to be a bittersweet, hopeful ending. In retrospect, it’s disturbing as hell.

4. Wear the same costume as her boyfriend: "Revenge of the Nerds"

If attempted date rape isn’t strong enough for you, “Revenge of the Nerds” offers up actual rape as a substitute option.

Lewis, like so many cinematic awkward outcasts, yearns for a woman he can’t have. Betty is the sexy (noticing a trend?) girlfriend of Stan, the jock, and she’d never give a guy like Lewis a chance.

So, he simply finds a “loophole.”

At a costume event, Lewis dons Stan’s costume and tricks Betty into having sex with him. She assumes she’s sleeping with Stan and that he’s keeping the costume on so they can enjoy a little role-playing.

After sex, she finds out it was actually Lewis she just slept with. Rather than alerting the authorities, she praises his sexual performance.

According to “Revenge of the Nerds,” tricking someone into having sex with you isn’t rape if you’re good in bed.

“Dead Poets Society” is, in general, an uplifting film about a group of young men who, through the guidance of their beloved teacher, learn to live full lives and chase their dreams.

For the character of Knox, this means chasing Chris, a girl who captures his heart by being extremely pretty.

There’s a problem, though: Chris already has a boyfriend.

This doesn’t deter Knox one bit.

He tries kissing her at a party (despite the fact that she’s, well, asleep), but her boyfriend intervenes. He sneaks into her school and stalks her down the hallway. He stands in front of her class and recites a poem he wrote. He ignores all of her pleas to be left alone. All this, despite the fact that she’s made it abundantly clear, on numerous occasions, that she’s involved with someone else and not interested.

In real life, this story would end with a restraining order. In “Dead Poets Society,” it ends with Chris agreeing to go on a date with Knox, realizing the error of her ways and sending the message to viewers that obsessive persistence is the key to a woman’s heart.

Eli Roth’s debut, like many other horror movies, tacks a romantic subplot on top of the carnage to get us emotionally invested in the characters.

In this case, the main male protagonist, Paul, has feelings for his lifelong friend, Karen. She’s been flirting with him and asks him to share a bed with her, needing someone to comfort her after they accidentally killed a sick hobo.

After Karen falls asleep, Paul does this.

Yes, that’s a scene in which the hero of this horror movie violates his unconscious best friend like he’s auditioning to be the villain of another horror movie. But it’s OK, because, come on, he really, really likes her.

Yes, “It’s a Wonderful Life” is a heartwarming classic, worthy of its annual praise.

But, let’s be honest, there is one scene that’s straight out of a slasher film.

It involves the characters of George and Mary enjoying a romantic evening stroll. Having fallen into a pool (long story), Mary doesn’t have any clothes on aside from a robe. She loses it when George accidentally steps on it, and hides behind a nearby bush, asking him to throw it over to her so she can be, you know, not naked in public.

Isn’t this how most “Law & Order: SVU” episodes start?

While she begs for her robe, George ignores her, considering his options. Mary says she’ll call the police, but George reminds her that the police aren’t nearby, and they’d take “his side” anyway, because, holy sh*t, this scene is dark.

He finally decides to “make a deal” with Mary but is interrupted when his uncle pulls up in a car and tells him that his father’s suffered a stroke. George hops in the car, leaves the robe by the bush and abandons Mary on a desolate road, never revealing the details of the “deal” he planned on making.

Not that it matters, because despite this experience, the next time Mary meets up with George, she’s absolutely smitten with the charming scoundrel.

Now, I’m not trying to argue that you’re a bad guy if you enjoy these movies, or if you didn’t pick up on these details right away. Most of these films are favorites of mine, and for a long time, I was blind to how creepy they can be when it comes to depicting sex, dating and romance.

But that’s the point. These scenes should set off some alarms in a viewer. Anyone who has ever identified with a romantic subplot on their favorite sitcom knows we can sometimes make the mistake of relying on fiction to guide our real-life behavior.

If, like me, you’re a heterosexual man, that means you need to make sure you pay close attention to what you’re seeing when you watch movies about guys looking for love. Because if you’re not careful, you can start to take those movies more seriously than they deserve.