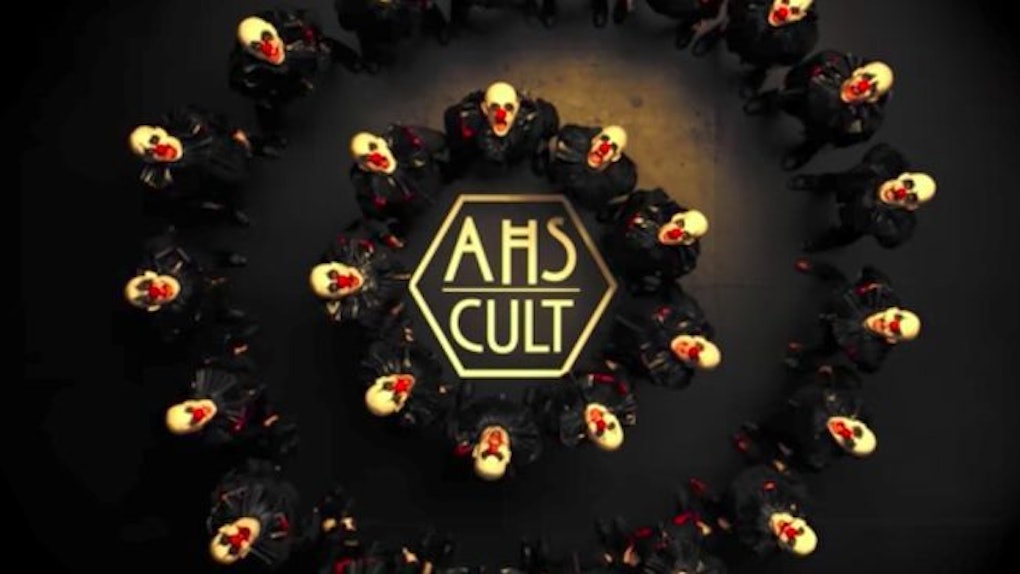 Finally, after what seems like years of waiting and endless speculation, we have a title for the next chapter of American Horror Story. Drum roll please, the new season will be called AHS: Cult.

The show's creator, Ryan Murphy, revealed the title at San Diego Comic-Con last night and tweeted it out directly after, confirming for fans they' would be getting everything they have been hoping for since Season 2.

Of course, the title announcement was followed by the release of a brand new teaser trailer to get us excited and keep us *somewhat* satisfied until we get the next clue, and, holy sh*t, is there a lot to unpack.

Nightmare clowns? Check. Swarm of unfriendly looking bees? Yup, got 'em. Haunting music? You betcha. All of these seem like staples for an AHS promo, so I'm not too alarmed, but there's one part of this teaser that will make you clutch your pearls and send chills up and down your spine.

If you look closely at the 0:04-minute mark, you'll notice amidst the clusterf*ck of freaky clowns there is one woman not in clown garb, minding her own damn business.

She's just kinda standing there, and we only see her for a split second, but that's enough time to see that she clearly doesn't belong.

As usual, when it comes to AHS, I have some questions: Who is this woman? How did she get there? Could she be the first hint of some tension this season? Is she refusing to drink the cult's kool-aid? Was she placed there by the government? Or was she just on her way to a doctor's appointment and got lost?

Obviously, we won't know the answers to any of these questions, or how this season's theme will tie into the election until the show airs in September. I'm sure we'll get some pretty interesting fan theories out of this teaser trailer in the meantime, though.