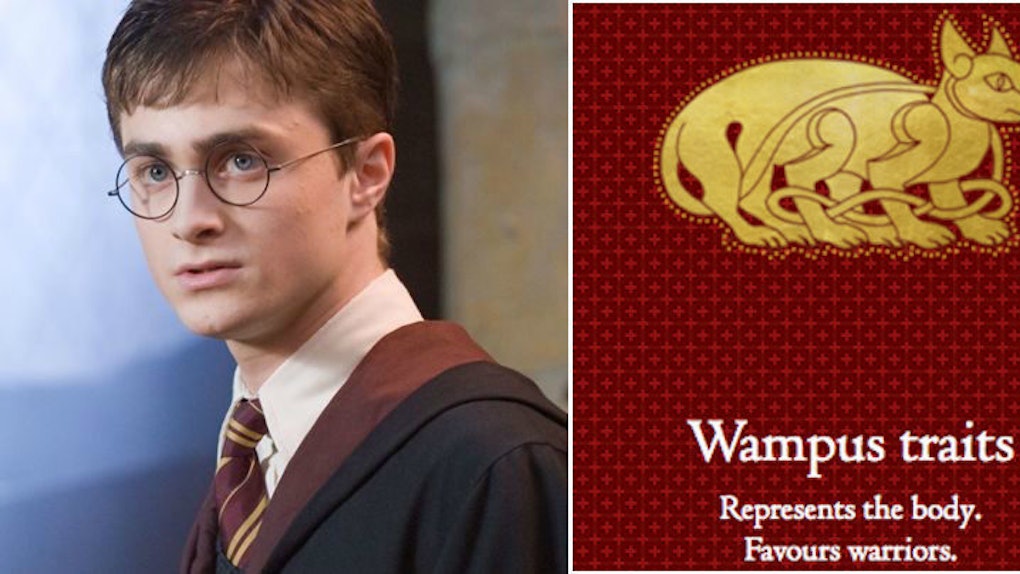 American magical folk, we finally have a school to go to and it's complete with our very own personality-based house system!

On Tuesday, JK Rowling released a new Pottermore essay as part of her series, "Magic in North America," and it's all about the American wizarding school known as Ilvermorny.

There's a ton of new information to process about the founding of Ilvermorny, so if you're dedicated, you can read the full Rowling writing.

If you're slightly less dedicated, you can just watch this dope video about it:

But even MORE exciting than a boring old history lesson (sorry, Hermione) is a BRAND NEW SORTING HAT QUIZ!

Just like Hogwarts, Ilvermorny has four houses students get sorted into based on who they are. Each house is named after one of these magical creatures: Horned Serpent, Pukwudgie, Thunderbird and Wampus.

You have to make an account to take the official Pottermore sorting quiz, but it's free to sign up.

And since I know you're all wondering, I'll tell you: YA GIRL'S IN PUKWUDGIE!

We don't know a ton about these new houses yet, but here's what we do know, according to Pottermore's descriptions of the personality traits and animals the houses are named after:

So, despite earlier theories about the American houses when the names first came out, these houses don't sound like the direct equivalent of their British counterparts.

In that case, where would Harry, Ron, Hermione and the rest of the Hogwarts crew fit in at Ilvermorny if they had been born in America?

Or what if one of them had transferred to do a fun wizardly study abroad or something?

I think you guys know what time it is. IT'S TIME TO SORT!

And if you strongly disagree with my choices, please let me know in the comments! (You can also always comment if you agree and shower me with praise!)

It took me a while to warm up to the idea of Harry as a warrior, but at the end of the Wizarding War, Harry does not hesitate to sacrifice his own life for the greater good — sounds a lot like a soldier to me.

The obvious choice might be Horned Serpent, the house of the mind and scholars, but don't forget the Sorting Hat didn't put Hermione in Ravenclaw, either! With her fiery passion to fight for justice, and her eventual delight in breaking the rules, Hermione is all soul and adventure.

Ron is tricky. He has a lot of heart, but not enough compassion to be a healer (not Pukwudgie). He fights the good fight, but more out of loyalty to Harry than out of a sense of duty to his people (not Wampus). And, no offense to Ron, but he's not the most scholarly (not Horned Serpent). That leaves Thunderbird. Ron does have a lot of soul.

No, it's not just because of the snake thing. While Slytherin is all about cunning ambition, Ilvermorny seems to be more about introspection and analytical skill. Draco Malfoy is all of those things. Don't forget about academically smart he is — he totally aced all his O.W.L.s, like a nerd.

Neville Longbottom is crazy brave, but he's a lover and not a fighter by nature. His compassion for others and protective nature make him a total Pukwudgie. Herbology's kind of like the healing of plants, right?

Luna is also tricky. Ultimately, her thoughtfulness, introspection and love of riddles make her Horned Serpent for me. Not unlike the reasons she's a Ravenclaw.

Ginny is strong, fierce and a fighter — but she's not a warrior. She has a thirst for adventure and, like Hermione, she maintains firm, unwavering beliefs. She definitely in Thunderbird with her brother.

This is the one I'm the least sure of, but here's my reasoning: To me, one of Cedric's most defining moments before his death was when he gave Harry a hint about the golden egg in the Triwizard Tournament. Cedric wanted to win, but only if it was a fair fight. Isn't that the trait of a great warrior?