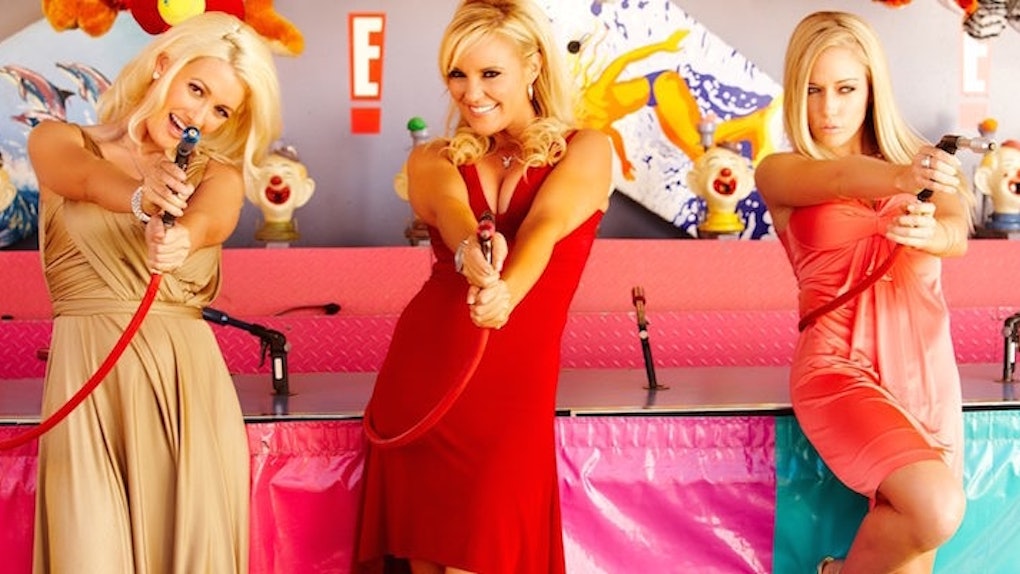 Where Are They Now? Your Favorite Ladies From 'The Girls Next Door'

It was in that moment your life changed forever and you stopped just imagining life at the Playboy Mansion -- you started (kind of) living it.

You became emotionally invested in the animals, outfits and lifestyles of Hugh Heffner's happy trio. At times, it felt like you were even in the Mansion with Hef and could reach out and pet the peacocks walking across your screen. Ugh, those were the days, am I right?

I understand you're probably on the edge of your seat right now, desperately waiting to find out where your favorite ladies are today. Well America, the wait is over. We have answers.

Let's start with Holly because, well, she's the star.

Since being Hef's #1 gf, Holly has been doing incredible things and really making a difference in the world.

After ending things with Hugh (you go, girlfriend), Holly moved to Las Vegas and had a mini spin-off reality series. She also starred in her own topless burlesque show and was on "Dancing with the Stars" where she did keep her top on.

In 2013, Holly married Pasquale Rotella and had a baby girl named Rainbow Aurora. She got married at Disneyworld because it's romantic and Mickey Mouse is the sh*t (I'm assuming that's the reason). Additionally, Holly is a huge "Game of Thrones" fan and a noted Ravenclaw. See? Celebrities are just like us.

MOST IMPORTANTLY, Holly released a tell-all memoir, "Down The Rabbit Hole," which has been a best-seller for two freaking months. It discusses the darker side of her time at the Playboy Mansion and her true relationship with Hugh Hefner.

If you haven't read it yet, get your little badonkadonk to the nearest Barnes and Noble ASAP.

Kendra hasn't lost touch with her sporty, spunky self since leaving the mansion. She's been going through some rough times, however. Her husband, Hank Baskett, had an affair while she was eight months pregnant last April.

Kendra has stood by her man, though, and recently reached to Hef for some relationship advice while they try to work it out.

In an exclusive clip from her show, "Kendra On Top," Kendra finds out about "Down The Rabbit Hole" and how Holly reportedly trash-talks her and Hef. Kendra wants to take action.

She's planning on going up to Holly with a copy of her book and saying, "Sign this bitch." Sh*t. Beef is about to go DOWN.

Other than that breaking news, Kendra has a son named Hank Jr. and a daughter named Alijah. She also likes making breakfast.

Let's move on to my girl, Bridget. The MVP.

After the show, Bridget started a mini-reality show called "Bridget's Sexiest Beaches," which lasted for one full season. She apparently had a new TV show in the works in 2013, so we're still waiting to hear more about it!

Additionally, YESTERDAY BRIDGET GOT ENGAGED. Her hubby Nick Carpenter proposed and Bridget uploaded this lovely photo of her ring on Instagram.

You may notice it's in the shape of a spider. You see, Bridget isn't just about that traditional lifestyle and she's like, totally obsessed with Halloween. So it makes perfect sense this is her engagement ring.

Also, please note that it is NOT a black widow. Bridge has made sure to explicitly mention this fact because THAT would be f*cking weird and this is just a normal spider, OK? Here's another picture with a "Till Death Do Us Part" sign for extra romantic emphasis.

Additionally, Bridget spent Wednesday at Disneyland with Holly. Does this mean Holly will be invited to the wedding? Maybe she can take Kendra as her plus one?

PS: Bridget has also taken her talents to the fashion world. Our girl's a mo'f*ckin apron designer! FINALLY, I can stop wiping my hands on the backs of my jeans when I cook. Instead, I'll throw on an $89 apron and look adorable AF.

Check out her Instagram and Etsy page if you're tryna buy and bake in style: