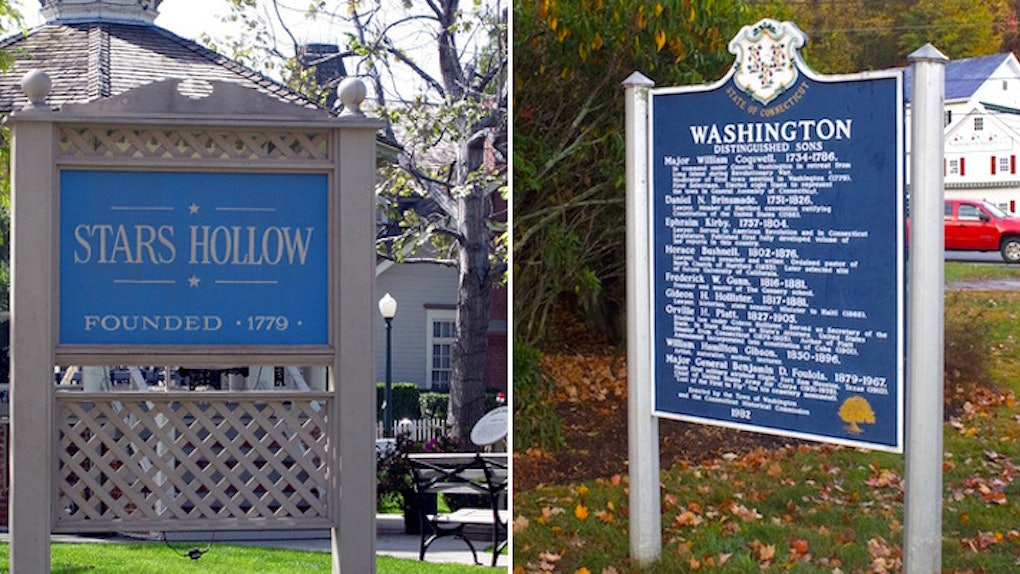 Photos Of The Real Stars Hollow From 'Gilmore Girls'

If you're a "Gilmore Girls" fan who dreamed of living in the magical town of Stars Hollow in the early 2000s, I have good news for you: You can do that. Because Stars Hollow is real.

And by that, I mean the concept of Stars Hollow is real — make no mistake, "Gilmore Girls" was most definitely filmed on a Warner Bros. lot in Hollywood, CA. (The very same set "Pretty Little Liars" used a few year later, in fact. Hollywood magic!)

But Stars Hollow is real in the sense that small, quaint towns in Connecticut are real.

And it's real in the sense that the creator of "Gilmore Girls," Amy Sherman-Palladino, once stayed at one of these small towns in Connecticut and got the idea for her show.

In a 2005 interview with the AV Club, the showrunner said,

I was going to put [the characters] in a city area, but then I went on vacation to Connecticut, because I wanted to see Mark Twain's house. I stayed at an inn, and it was very charming, in a tiny town, and everybody seemed to know each other, and there was a pumpkin patch across the street.

Because I am incredibly blessed, I got to visit that very town  — Washington Depot, CT — for the "Gilmore Girls" fan festival last month.

It's not exactly like the Warner Bros. set, but it still gave me a lot of feels. And I have a feeling it will give you feels, too.

And with just a few short weeks left until the premiere of the revival, there has never been a better time for Gilmore feels!

The sign for Washington, CT looked, for the most part, very similar to the Stars Hollow, CT sign, except with a bunch more history on it.

It did not list the founding year (which a quick Google search tells me is 1779, just like Stars Hollow), but instead the "distinguished sons" of the city.

The Washington Food Market was one of my favorite Stars Hollow-isms about the town.

The inside looks like any other modern day grocery store, but just the fact it wasn't a chain and was the only place to get groceries in town had me charmed into feeling like it was Doose's Market.

I didn't see Taylor or Dean inside, but I did steal some corn starch for Rory's sake. Just kidding, I didn't. Don't steal, kids.

Sadly, Washington Depot didn't really have a diner like Luke's. But it did have this hip coffee shop for fans to get their caffeine fix, called Marty's Cafe.

It's unclear to me if Stars Hollow even has a hardware store now after Luke turned his dad's shop into a diner. But this functioning hardware store, Washington Supply Co., gave me definite Williams Hardware vibes.

I admit, I was a tad disappointed by the lack of Kim's Antiques-levels of antique stores in Washington. While I did pass several hundred antique shops on the drive over to Washington, I couldn't find any legit ones in the actual town.

However, this home and gardening store sold some antiques, so it'll have to do.

OK, full disclosure: This guy was hired to walk around and be a troubadour specifically for the festival. I'm not sure if he's even from Washington.

But still, he was perfect, and he sounded lovely. (No competing troubadours here!)

So here it is, the Mayflower Grace, the inn Amy Sherman-Palladino stayed at way back when.

Let me tell you, this place was way fancier than the Independence or Dragonfly Inn ever was, but that's probably because WB didn't really have the budget to build a mansion-sized set.

(The Mayflower wasn't in walking distance of the festival, so fans were bused over. Then we weren't allowed inside because they didn't want our broke asses bothering the rich asses of the Connecticut elite. But the garden was beautiful.)

OK, I'm praying to Amy Sherman-Palladino the people who live in this house did not see me creepily taking pictures of their front lawn.

But it just reminded me so much of Lorelai and Rory's house that I couldn't help myself. That white picket-fenced porch!

Don't get me wrong, I loved Washington for the town it was, but it was pretty disappointing to find out there wasn't a pavilion or gazebo of any kind there.

The closest thing fans can find is the gazebo in the town over, New Milford, CT. Unfortunately, I didn't get to see this iconic Gilmore landmark for myself, but the nice folks at Priceline, who have created a "Gilmore Girls" road trip itinerary, sent me this picture to use.

Even though the businesses didn't quite look like what Hollywood dreamed up for Stars Hollow, the most Gilmore part of Washington Depot was just walking down the streets of small town Connecticut on a brisk autumn day.

It doesn't get much more Gilmore than that.

And don't worry — even if you're not as blessed as me, we all get to go back to Stars Hollow soon.

“Gilmore Girls: A Year in the Life” will begin streaming on Netflix on November 25.