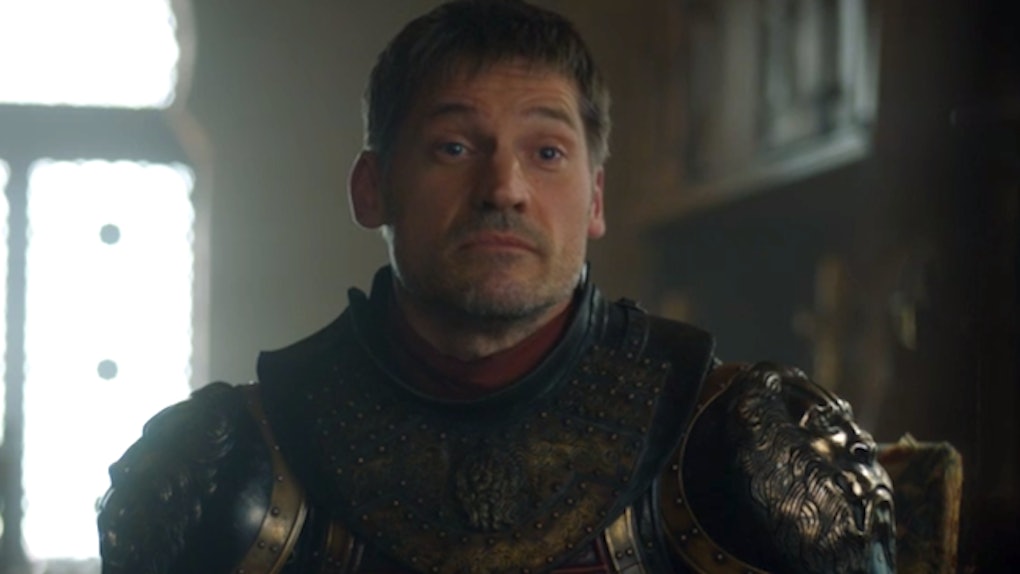 Will Jaime Die On 'Game Of Thrones' Season 7? Here's What We Know

As we head into the Season 7 finale of Game of Thrones, the question plaguing every fan is which major character will be the next to die. Obviously, a pivotal finale for a show like Game of Thrones must mean shocking character deaths, right? And fans are looking at the Lannister family to provide them with their final death quota this season. In particular, a number of fans are wondering whether or not Jaime will die on Game of Thrones.

We've already had a death scare from Jaime Lannister a couple episodes back, when he made a foolhardy charge at Daenerys and her dragon after they decimated his army. Of course, Dany's dragon was able to handily ward of Jaime's attack by shooting a stream of fire at him, which he narrowly avoided by jumping into a nearby lake. Thankfully for him, Bronn was nearby ready to save him from drowning beneath the weight of his armor, but fans think that Jaime's death-avoiding luck won't hold up through the upcoming series finale.

Now, the most predicted character death ahead of the finale is actually Jaime's sister/lover Cersei Lannister. Thanks to that often-brought-up Valonqar prophecy, fans are expecting Westeros' currently reigning queen to finally meet her end in Sunday's finale. The prophecy given to a young Cersei told her that she would die at the hands of "little brother," which seems to be clearly about either Tyrion or Jaime (who although he is her twin, was born moments after her). So we might be seeing Jaime kill Cersei in the new episode, but what will happen to the Kingslayer after possible adding Queenslayer to his title as well?

Well, one theory predicts he won't last much longer if he does kill Cersei. Let's not forget she's protected by the unstoppable, Frankenstein-esque version of The Mountain, who will likely kill whoever harms Cersei. Back in Season 5, Jaime told Bronn he wants to die in the arms of the woman he loved. Fans assumed that meant Cersei, but it could also mean his unlikely, close companion Brienne of Tarth. Now that Brienne is on her way to meet up with the Lannister's per Sansa Stark's orders, we might see Jaime getting his wish of dying in her arms soon enough.