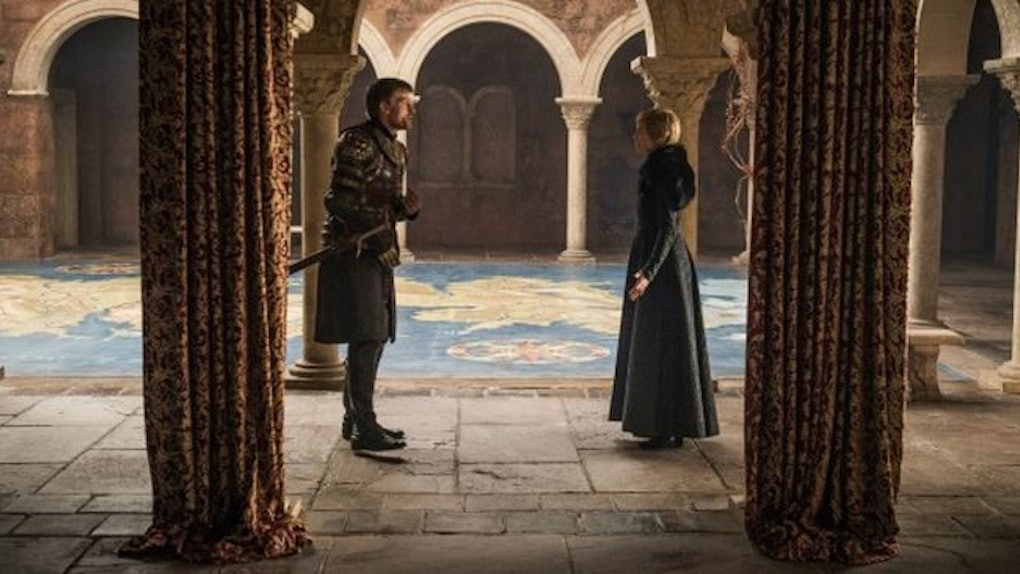 Does Cersei Lannister Die In The 'Game Of Thrones' Books? Here's Everything You Need To Know

We're only days away from the Game of Thrones Season 7 finale, and fans are going wild waiting for leaks, clues, details, hints, anything that might tell them about the events of the upcoming episode. Will we get another mass murder from Cersei the way we did in the Season 6 finale? Will "The Dragon" and "The Wolf" get together? Is there anything we can learn from the novels and extra chapters from the A Song of Ice and Fire series? Who lives? Who dies? For instance, does Cersei Lannister die in the Game of Thrones books?

This is really hard for book readers to admit to themselves, but at this point the show has blown way past the end of the books, and even the few chapters of The Winds of Winter that George R.R. Martin has read aloud at comic-cons throughout the years. The days where we knew Jon Snow was going to be stabbed in the finale are long over. And those storylines that are "ahead" as we might consider them are mostly from characters who aren't even in the show.

But is there anything we do know that might help inform our guesses for the Season 7 finale? Let's discuss.

Is Cersei, Or Anyone Else Major, Dead In The Books?

No. In the books, Cersei has just arrived home from her Walk of Shame, and is alive and well and trying to make that haircut work.

In fact, the last of those who were "dead in the books, alive on the show" was passed at the end of Season 5. Heck, Jaime hasn't even come back to King's Landing, he's still in the Riverlands. So for that matter is Brienne. The Hound is still in hiding in his paradise as a grave digger. Sansa hasn't even come back to Winterfell. Dany is lost on the Great Grass Sea, having fled Meereen.

One could argue that Jon is dead in the books and alive on the show, but that's because he hasn't been resurrected yet. Not helpful.

Do We Know Jon's Real Name Yet In The Books?

No, as I said, he's just been stabbed by Night's Watch and passed out and died. But we do have a clue here as to what it might be, and it comes from a character who was cut from the show.

Some of the very complex parts of the books have been cut from the show because they make things too complicated. For instance, the show cut the overly complex "Fake Arya Stark (actually Jayne Poole) marries Ramsay Bolton, and is tortured Theon-style to believe she is Arya in order for him to have control of Winterfell." Instead, they just had Sansa reveal herself (which she hasn't done yet in the books) and marry Ramsay herself, which was far more clear cut.

Likewise, the show has cut the "Young Griff" storyline, in which two Westerosi men join Jorah and Tyrion in their trip to Meereen, only to reveal themselves to be an old Hand of the Targaryen kings, and the younger son of Elia Martell and Rhaegar Targaryen, Aegon. Aegon is currently trying to raise himself up as the rightful heir and is about to challenge Dany to the throne while she's out missing.

We've wondered how this story line will resolve itself, because clearly, this Aegon is a "false dragon," to borrow a phrase from another series. Obviously, we now know it's that the marriage to Elia was annulled, making Jon the rightful heir. But what will his name be revealed to be? Might he too be named Aegon Targaryen?

Rhaegar believed the Aegon he had with Elia would be the "Prince That Was Promised." He must have changed his mind when he annulled that marriage. Would he give the new son that same name, since he would now be that foretold prince? That would certainly explain why the show cut the first Aegon, wouldn't it?

Will Winter Arrive In King's Landing?