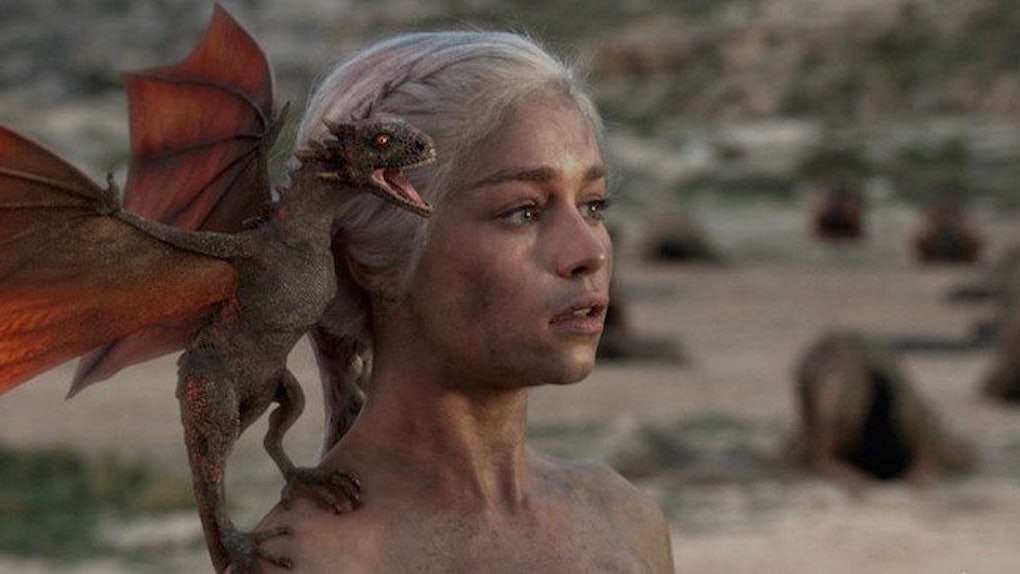 Last night at 8:30 pm, dragons took flight over Herald Square in New York City for the "Game of Thrones" season 5 showing of "The Dance of Dragons."

The video was a 20-minute animated Blu-Ray release extra narrated by dead characters from the show and detailed the two-year, dragon-filled battle of Daenerys' ancestors in House Targaryen.

Personally, in addition to watching dragons do something expectedly crazy, I was there for the "special cast member appearance" that was promised in the event's advertisements.

In my head, I silently prayed to get a glimpse of Dany herself... or maybe Jon Snow would be there, alive and well! Hey, I'd even settle to see Little Finger.

As I sat in my seat, waiting for the video to start and the guest to appear, I started making small talk with the people around me while simultaneously starting to feel terribly out of place not wearing something "GoT" related.

I first met Ciara, 16, who told me she had heard about the event while attending another one in Union Square, which took place earlier yesterday morning, from winteriscoming.net. She said,

When I heard about the event I told my mom we had to go to this... And then yesterday they reported this event [here in] Herald Square so we figured we might as well stay the whole day. We've been here since 2:30 this afternoon.

I then saw a familiar head of white hair in the distance... It may not have been Khaleesi herself, but I met Lauren, 23, who told me,

We heard about this screening and have been waiting here for about eight hours. My husband read the books and he got me into the TV show.

It was time for the screening to begin and the "special cast member" to appear. However, in typical "Thrones" suspense, first, writer Dave Hill took the stage to introduce the short film.

With nearly a thousand people gathered around anxiously waiting, Hill announced the presence of Liam Cunningham, AKA Ser Davos Seaworth.

Ser Davos gave a brief introduction, telling the audience he truly had no idea how big the show would be and how proud he was to be a part of it. *Note the photo of him and Shireen Baratheon in the background, RIP Princess.

While Davos was not the Jon Snow-caliber star I think most of the audience was expecting, he was still pretty cool to see in person. The real disappointment, however, came with the promised dragon spectacular after the screening.

At the end, those in attendence will get to see dragons actually taking flight across the city.

So, no. This was not exactly a dragon "actually taking flight" over the city, it was more on par with something my sixth grade English teacher projected onto the classroom blackboard.

Regardless of the disappointment from the evening, after all was said and done, the audience and I were still twitching in anticipation of the sixth season.

"Game of Thrones" season 6 premieres on HBO on April 24.

Winter is coming, be prepared.