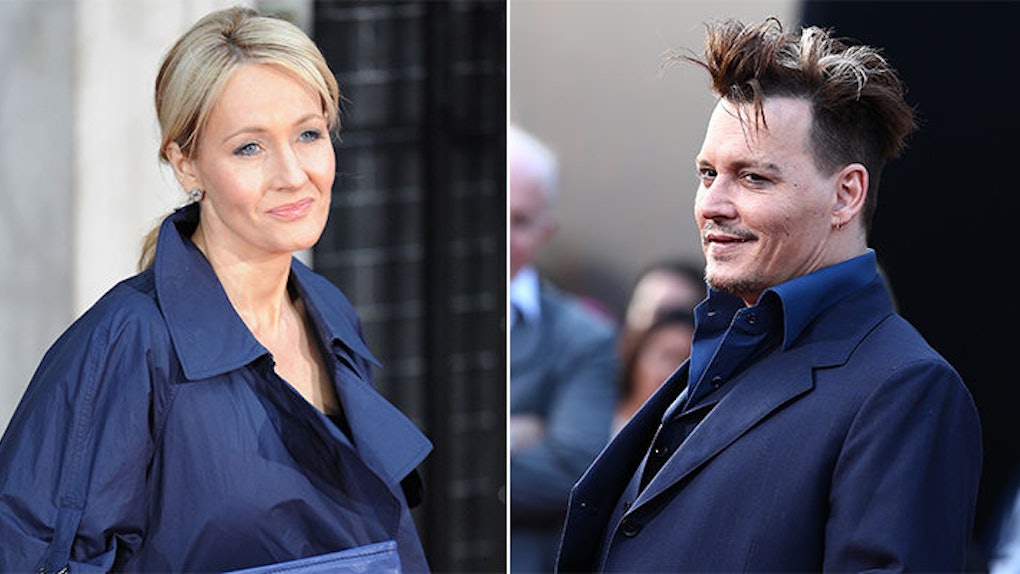 JK Rowling Is 'Delighted' Johnny Depp Is In 'Fantastic Beasts'

JK Rowling does not see a problem with putting Johnny Depp in her "Potter" franchise.

Less than six months ago, Depp was faced with a charge of physically abusing his then-wife, Amber Heard.

Many fans were outraged to hear, despite these abuse allegations, he would be playing the important role of Grindelwald in their beloved franchise.

However, it seems JK Rowling does not share her fans anger.

At the red carpet premiere of "Fantastic Beast and Where to Find Them" in New York on Thursday night, the author said she was "delighted" to have Depp in the cast, according to a report from BT.

David Yates, the director of "Fantastic Beasts" as well as the last four "Harry Potter" films, was also on the red carpet. He agreed with Rowling, adding,

You have to trust us and see what he does in this movie... What you have to remember about Johnny is that extraordinary talent and that talent never goes away. Hollywood is such a fickle place. People go up and go down. He's a huge Potter fan. He loves the world. He was beyond excited about working on this material. In fact he didn't even want to see a script, he just said 'I'm in.'

Unfortunately, for many fans, Hollywood and talent is not the issue here.

Yates already raised eyebrows among fans earlier this week when he referred to Depp's abuse allegations as "odd things."

However, it seems fans are stuck with Depp for the next four films of "Fantastic Beasts."

Depp is confirmed to be playing Gellert Grindelwald, the dark wizard who many are familiar with as being Albus Dumbledore's past lover.

You can see a brief shot of Depp for yourself at around 3:22 in the below featurette.

Yates has also confirmed he is looking to cast a younger Dumbledore for the upcoming films.

Rowling did not confirm whether or not fans would see this romantic relationship play out on screen.

I can't tell you everything I'd like to say because obviously it's a five-part story and there's lots to unpack in that relationship. I will say you'll see Dumbledore as a younger man and quite a troubled man because he wasn't always the sage. He was always very clever. We'll see him at what I think was the formative period of his life. As far as his sexuality is concerned, watch this space.

"Fantastic Beasts and Where to Find Them" will be in theaters everywhere November 18.