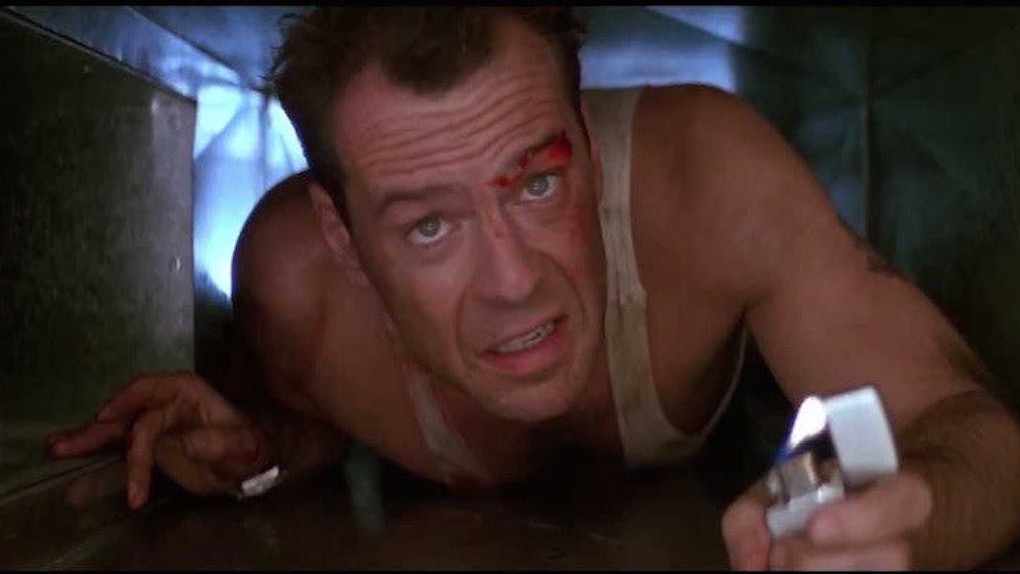 'Die Hard' Is A Christmas Movie, End Of Discussion

Let me make one thing clear: "Die Hard" is a Christmas movie and if you think otherwise, you can throw yourself Hans Gruber-style off the side of Nakatomi Plaza.

As much as Christmas is a time for family and being thankful for the positive aspects of your life, it's also a time to get in a yelling match with your dumb cousin at the Christmas table about whether "Die Hard" is or isn't a Christmas movie.

This age-old debate is the kind of thing that breaks up families and forces friends to reevaluate their relationships.

I once watched a college friend of mine break up with his girlfriend over a debate that started with her saying it wasn't a Christmas film.

Granted, the larger argument sort of evolved into whether or not she cheated on him or not (she did) and whether or not he trusted her (he didn't), but the point is it's dangerous we haven't as a society reached common ground on this.

That's why I'm here to set the record straight. As an entertainment writer, movie buff and Jewish man, I am a universally recognized authority figure on all things Christmas.

As that authority figure, it's time I declared once and for all that "Die Hard" IS/WAS/WILL ALWAYS BE a Christmas cinema touchstone. As far as I'm concerned, Christmas movies require five main elements and "Die Hard" meets every single one with flying colors.

1) It's set during Christmas time.

Granted, it takes place in LA so snow isn't a thing, but this movie happens during Christmas time. The whole thing starts because John is trying to make things right with his estranged wife at her company's holiday party.

You know what other place was hot on December 25 and had a bunch of palm trees and sand? BETHLEHEM! That's right. Whether you like it or not, LA is more like the original Christmas climate-wise than any other depiction with Santa. There was no snow, there were no reindeer, and there were no chimneys.

There's just a bunch of hot air and stars AKA Hollywood.

2) It gives you a holly jolly feeling.

This is key. A Christmas movie must have a happy ending that gives you a holly jolly feeling.

If "Home Alone" ends with Kevin's parents coming home to find him murdered by the Wet Bandits, then it wouldn't be a Christmas movie. It'd be a horror movie and the beginning to a longer legal drama about whether or not the McAllister parents should retain custody of their kids.

DOES THIS NOT GIVE YOU A HOLLY JOLLY SPIRIT?!?!

The ending of "Die Hard" is as holly jolly as they come.

3) You learn a Christmas-based lesson.

Let's remember that John McClane is a family man.

He went to that holiday party to try and patch things up with his estranged wife.

Terrorism, in a way, was the best possible thing to happen to that marriage.

It was through John's actions against Hans and co. that Holly realized that he was really the man for his family. I gotta assume it also helped John figure out the lengths he was willing to go through to keep his family alive.

What was the lesson of "Die Hard"? Don't be afraid to achieve the unachievable as there is nothing more important than family.

4) It has Christmas tunes.

5) It has Christmas miracles.

Think of all the things that just HAPPENED to happen in order to make sure McClane was able to take down Hans.

That's a Christmas miracle if I've ever seen one.

Digital Spy, Empire, Entertainment Weekly, Forbes, The Guardian, Hollywood Reporter and The San Fransisco Gate all have it listed in their Top 10 Best Christmas movies lists.

Now that it's settled, it's time to talk about how "Die Hard 2" is actually an allegory about how the electoral college is an outdated system of... wait! Where is everyone going?!?!