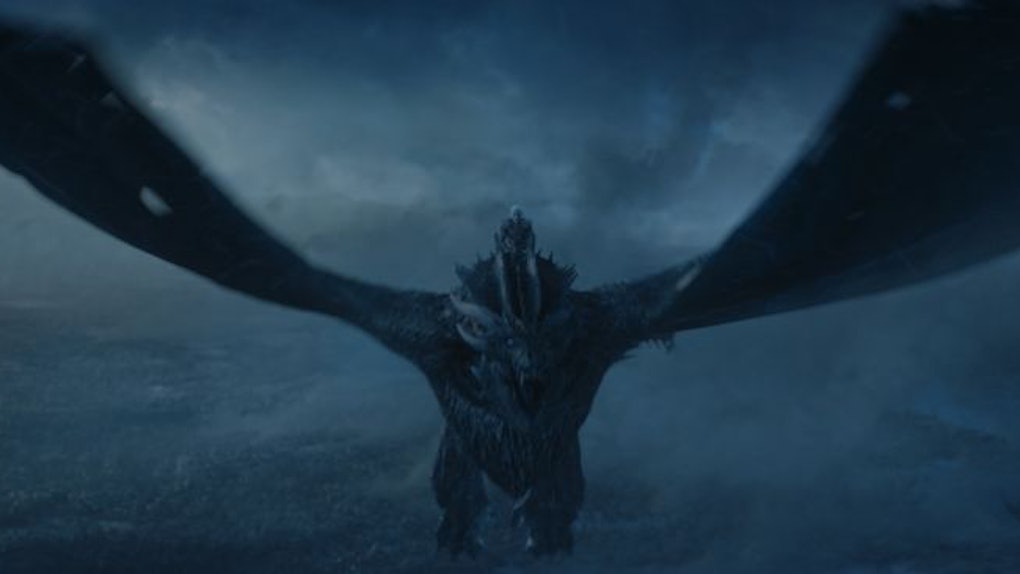 Game of Thrones is over for the year, going out with a bang-up supersized episode stuffed to the gills with references, Easter eggs and callbacks. With an episode that ran almost 80 minutes, each scene felt supersized -- the opening scene in the dragon pit alone took up almost half of it. Let's roll through the almost dozen and a half Game of Thrones Season 7 finale Easter eggs in this week's episode, "The Dragon and The Wolf."

That opening scene, for the record was part of why this list is so long. For the first time since the pilot, we had more main characters in the same shared space that we've seen in seven years. Like the pilot episode, only four major characters were missing; there it was the Targaryen clan: Daenerys, Viserys, Jorah and Drogo. Here in Episode 7, it was the Stark Clan: Sansa, Arya, Bran and Littlefinger. The rest of the others have long and storied histories together, all of which came up during their meetings.

So where have you seen that image before? Or why *does* that line seem so familiar? Let's run-down all the callbacks and Easter eggs tucked away in Game Of Thrones' seventh episode of Season 7.

Heroes Of The Blackwater

When Tyrion, Pod, and Bronn get together during the walk to the Dragon Pit, Tyrion notes they are "the Heroes of the Blackwater," a reference to both their time together as a unit during Season 2 when Tyrion was Hand, and their survival of Stannis' army when it attacked via Blackwater Bay at the end of that year. Though Bronn notes he could have just brought them there to betray them, his affinity for Tyrion is obvious.

The Brothels Are Far Superior

When Jon asks why anyone would want to live in a city, Tyrion points out the brothels are far superior, a reference back to the very first time we saw him in a brothel just outside Winterfell, which he complained wasn't nearly as good as those in King's Landing.

This has been a running joke since Season 3, when Tyrion and Bronn send Pod to a brothel to lose his virginity, and the whores love him.

Thought You Were Dead

Brienne and the Hound have a nice chat about Arya, who they were both trying to protect when Brienne nearly killed the Hound in Season 4. How times have changed. Now the Hound isn't going near Arya, while Brienne sees no need to protect her anymore.

Less a callback than a call-forward, The Hound sees his brother for the first time since he became the Undead Mountain That Shuffles and promises being a Rotten Man In A Tin Can isn't how it ends for him.

Back in the day, when Ned's honor caused him to totally screw things up with Cersei, the internet collectively facepalmed. Watching Jon Snow do the exact same thing this week was a callback to how badly the man who raised him handled this woman his first time out -- but this time, the rest of the cast did the collective facepalming for us. So gratifying.

One of the best scenes of the episode, Tyrion and Cersei's face-to-face was one long callback of their shared history, all the way from their mother dying in childbirth when Tyrion was born and through the deaths of all three of Cersei's children.

Tyrion wasn't kidding. He might not have liked Joffrey much, but he loved Tommen and Myrcella. Genuinely doted on them, as we see in the clip above. He would have never hurt them. Not even Joffrey.

The History of Dragons

This is major book callback, where the history of the fall of the Targaryens is tied to the loss of their dragons. When they arrived, they were mighty magical conquerors. As their dragons dwindled, so did the Targaryens. By the time their dragons died out, they had become ordinary, no different than a Baratheon, a Tully, a Tyrell, or a Stark.

It's a lesson we're glad to see Dany learn, especially since she also calls back to Season 3's line: "A dragon is not a slave."

The Witch Who Murdered My Husband

No seriously, why is the witch that murdered you husband a reliable source of information? I mean, Dany slept with Daario a lot and never got knocked up, so perhaps it's true. But Jon stoked thousands of fan theories with that one question.

There were a lot of great callbacks in Littlefinger's trial, from Sansa's bringing up Lysa's death to Bran once again quoting Littlefinger's "I told you not to trust me" line from Season 1. But the most striking was how the room turns on Littlefinger and he found himself in a room that was a mirror image of Ned's initial betrayal.

Jorah used to be a member. It was founded by a Targaryen bastard, and it was the last run by the man who still loves her, Daario.

Somehow we think this is an investment that will backfire.

Second of his name born to Rhaegar, Sixth of his name to Rule the Seven Kingdoms, 11th of his name since the fall of Valyria. There's been so many Aegon Targaryens that if Jon becomes king, he'll be Aegon VI Targaryen.

Lyanna and Rhaegar's wedding finally made it on screen this week, and it recalled the last wedding of a Stark who would be royalty: Robb to Talisa.

Not just a callback, an actual rerun of the scene from last year's finale, this time with audio of the critical moment.

Sansa and Arya stand together on the Walls of Winterfell, also recalling last season's finale, where it was Jon and Sansa. They too reminisced about what their father used to say, and Sansa once again got respect from those who had failed to acknowledge her up until now.

The heavy metal band Mastodon was cast by the show as an inside joke back in Season 5 as Wildlings in the Battle of Hardhome. This year they're back, and ready to head south.